After Astana… Russian attack on Idlib, amid Turkey’s silence 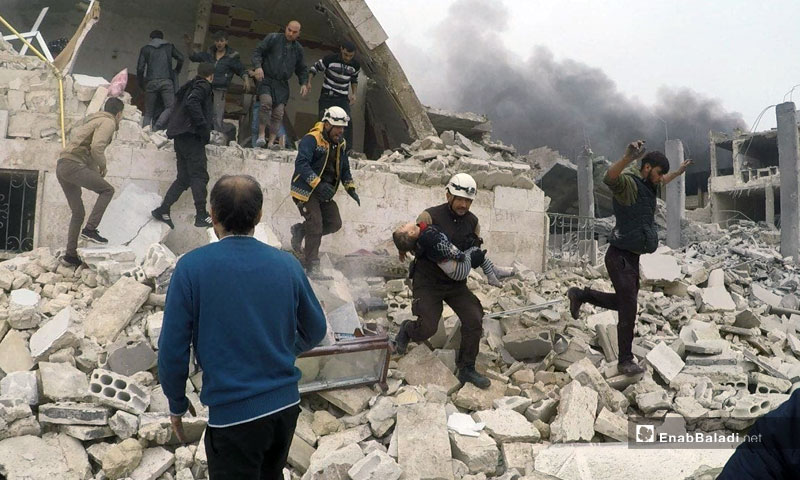 A rescue operation for a girl from the rubble after an aerial bombing that targeted her family's house - December 15, 2019 (Enab Baladi)

Moscow is still insisting on the military solution in its dealings with the Syrian file, which undermines the international talks aimed at reaching political solutions, as Russia currently supports a new military campaign seeking to control most of the countrysides of Idlib Governorate and secure international roads.

After the conclusion of the 14th round of Astana Talks n the Kazakh capital, in the presence of the guarantor countries (Russia, Turkey and Iran), a military operation has been launched by the Russian-backed Syrian regime to control Maarat al-Numan, the largest city in Idlib.

The southern and eastern Idlib countrysides have witnessed a noticeable escalation in the past days, particularly the Russian and Syrian warplanes raids that targeted residential neighborhoods, popular markets and service centers.

In addition, the Syrian Civil Defense has documented the death of 59 people and the injury of 135 others from 15 to 20 December.

Backed by the affiliated armed militias and Russian warplanes, the Syrian regime forces have launched a military operation on the eastern and southern axes of Idlib, which resulted in their control over the villages of Umm al-Tin, al-Mdirseh, Brennan, the farms of Umm Jalal, Rabia, Khreibah, Sh’aret al-Ajayz, Um Tweineh, Tell Maho, al-Fariha, Bresa, Abu Habbeh, and Tal Al Shieh, according to the official Syrian News Agency (SANA).

The military operation has been accompanied by an intense air escalation by the Syrian and Russian warplanes on cities and towns in the area located east of the international road M5, mainly targeting the city of Maarat al-Numan and its eastern countryside.

The faction of al-Fateh al-Mubeen’s operations room, which is active in Idlib, counterattacked with missile operations on the locations and gatherings of the regime forces in several axes of eastern and southern Idlib countrysides and the northern countryside of Latakia. It also reversed attempts to advance and infiltrate in these axes, declaring the death and injury of dozens of regime soldiers and documenting them with picture and videos on their official platforms.

In turn, the Chief of the Russian Reconciliation Center for Syria, Major General Yury Borenkov, said in statements, Sputnik news agency reported on December 20, that “during the counterattack of the terrorist attacks, 17 Syrian soldiers were killed and 42 others were injured,” while the Russian official estimated the factions’ losses at 200 dead and injured people, without official confirmation from their part.

Factions: No options except resistance

Al-Fateh al-Mubeen’s operations room believes that Russians are not committed to any agreement on Syria, especially Idlib, and they resort to escalation after each round of international talks.

“Through the recent ground operation with its military arsenal, Russia is trying to support the Syrian regime forces to advance and reach the city of Maarat al-Numan through the policies of close-range attrition warfare and scorched earth,” said Captain Naji Mustafa, spokesman for the National Front for Liberation, in an interview with Enab Baladi.

The ongoing battles between the factions and the Syrian regime forces in the Idlib axes are part of the “hit-and-run” tactics, in attempts to restore the areas that the factions lost in the recent attacks on the one hand and to prevent the regime and Russians from advancing towards the city of Maarat al-Numan on the other, according to the military spokesman.

“The fighting factions in Idlib have no choice but to resist and counterattack the regime and its Russian allies in the region,” said Mustafa.

What happened in Astana?

Ayman al-Asimi, the head of the media committee in the Syrian opposition delegation to Astana talks, said that what is happening in Idlib is a Russian escalation after Moscow failed to impose its point of view in the recent Astana talks, on December 11, and following the failure of the meeting to come up with any results ending Idlib’s tragedy.”

“There was a proposal by the opposition delegation to stop the bombing in Idlib, in a step aimed to test the intentions of Russians and the Syrian regime. But the latter has repeatedly continued its violations and the factions in the region counterattacked it,” insisted al-Asimi in an interview with Enab Baladi.

He added: “During the meeting, the Russians did not put forward any proposal on Idlib, but rather asked to talk about the Constitutional Committee and combating terrorism. This was rejected by the factions’ delegation and it demanded that the bombing be stopped before discussing any other proposal, given that it threatens all political options, including those of Geneva and Astana talks, and not only the path of the Constitutional Committee.”

The delegation of the Syrian opposition factions insists on stopping the bombing and military operations in Idlib as a foundation stone for the negotiations. This has been discussed between the delegation and the UN envoy to Syria, Geir Pedersen, during the recent Astana talks.

The delegation believes that the Syrian High Negotiations Committee (HNC) must announce its withdrawal from the Constitutional Committee and all political paths, and reject any discussions and talks in case the bombing on Idlib does not stop.

The three guarantor countries of the Astana talks (Russia, Turkey, and Iran) stated in their concluding statement, on December 11, that they would continue their cooperation to eliminate “terrorist groups” in Syria, including ISIS, al-Nusra Front, and other “terrorist entities” identified by the United Nations.

The three countries expressed concern over what they described as “the increase of terrorist activities” in Idlib Governorate but stressed on the need to calm the situation on the ground.

The statement stated that the guarantor countries will take measures to ensure the protection of civilians in the de-escalation zone in Idlib and its surrounding area.

The official Russian version says that it is targeting the strongholds of Hay’at Tahrir al-Sham (al-Nusra Front, which announced splitting from to al-Qaeda) in Idlib.

In contrast, the opposition factions’ delegation explained during a press conference, on the sidelines of the Astana meetings at the time, that the military operations in Idlib are not part of the war against “terrorism” as al-Jaafari claimed, but rather attacks by the regime and its allies on Syrian cities and villages, which led to civilian casualties and the displacement of the population.

However, al-Jaafari considered that the Idlib file is “related to combating terrorism and not related to any other files.” He continued: “The Syrian government has all the right with its allies to combat terrorism, and the regime has all the legal bases, including the Security Council and Astana resolutions. This gives the Syrian government the right to launch attacks.”

Idlib Governorate witnessed furious demonstrations by hundreds of protestors who tried to break through Bab al-Hawa Border Crossing with Turkey on December 20, but their move was met with repression by the factions of the region, mainly Hay’at Tahrir al-Sham.

Enab Baladi’s correspondent in Idlib reported that Tahrir al-Sham cut the roads leading to Bab al-Hawa Border Crossing with concrete blocks and military barriers, and fired bullets into the air with tear gas bombs in order to cut off the road in front of thousands of demonstrators trying to reach the border crossing.

A number of civil activists and observatories in northern Syria have called for holding demonstrations in Bab al-Hawa to protest against the military escalation and to demand Turkey to intervene and make its military points assume their role seriously.

Turkey ignored what is going on in Idlib, except for a statement by Turkish President Recep Tayyip Erdoğan on Thursday saying that 50,000 people were on their way to Turkey from Idlib.

On the other hand, al-Asimi insisted that Turkey supports the position of the Syrian opposition, along with its military deployment through the numerous checkpoints spread in Idlib and the countryside of Aleppo within the Sochi agreement signed in September 2018 with Russia.

On the ground, the Turkish forces strengthened their military points, as a Turkish military convoy entered Bab al-Hawa on December 21. A source from the Sham Legion faction told Enab Baladi that the Turkish convoy carries logistics equipment to support and reinforce the checkpoints located in the areas of al-Eis, Tell Touqan, Sarman and Maar Hattat in the southern countryside of Idlib.

In the past few days, local organizations in Idlib made appeals as a result of what they described as a “catastrophe” in the city of Maarat al-Numan and its countryside in the southern countryside of Idlib.

Mohamed al-Hallaj, director of the Response Coordinators Team, told Enab Baladi that the city of Maarat al-Numan and its eastern countryside are witnessing an intense escalation that has emptied the area of ​​most of its residents under a continuous displacement movement.

“There is a crisis of the provision of adequate shelter for IDPs located on the sides of roads and agricultural lands, which prompted local sides to open some mosques in the city of Idlib to host numbers of IDPs,” added al-Hallaj, pointing out that some of the city’s residents are still stuck in their houses despite the bombing, due to their deteriorating financial situation and the absence of means of transportation for displacement.

The director of the Civil Defense agency in Idlib, Mustafa Hajj Youssef, said that “the situation in Maarat al-Numan is catastrophic, and the crisis is more than what local organizations can bear, in addition to the great difficulties faced in the displacement of citizens and the transfer of their belongings to safer places due to poverty and the absence of means of transportation.”

“We send a call for help to local and international organizations to bear the burden of the catastrophe, which is the largest in the region for years,” added Hajj Youssef to Enab Baladi. He also clarified that the Civil Defense teams mobilized all of their staffs to face the crisis and transfer the IDPs from the area, which is being targeted by a constant escalation campaign by the regime and Russia.