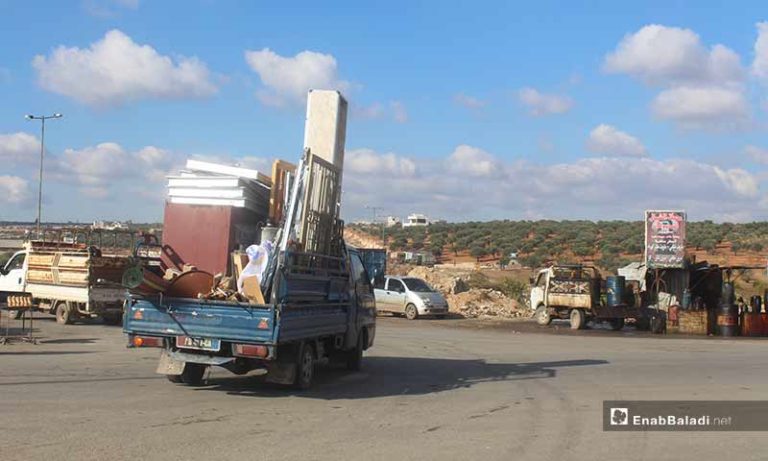 Joint Head of the Delegation of the Syrian Regime Ahmad al-Kuzbari during a press conference - Wednesday, November 27 (Enab Baladi) 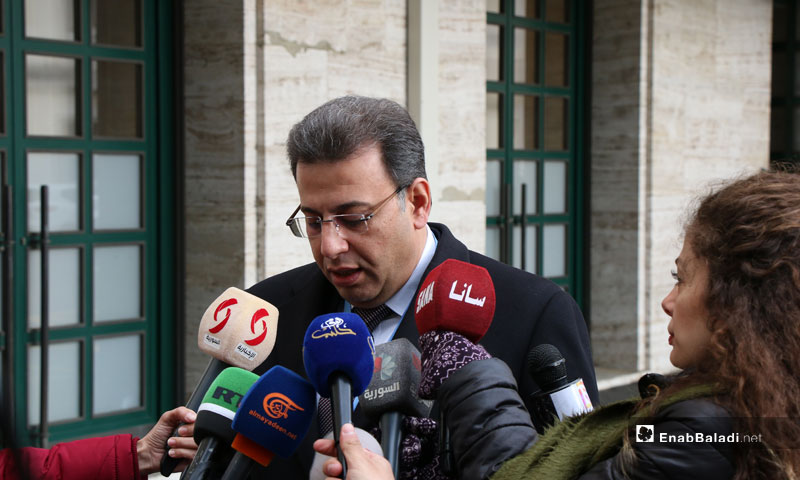 Murad Abdul Jalil – Enab Baladi | After the first round of the Syrian Constitutional Committee’s talks in Geneva, which has been described as “serious” and received praise by the International Envoy to Syria, Geir Pedersen, the Syrian regime started undermining the constitutional process in the second round of the convening of the mini-committee, which concluded its work on November 29, by submitting proposals that the opposition considered outside constitutional principles.

The five-day round of talks was held in the Swiss capital, Geneva, with the aim of holding the meeting of the 45-member mini-committee (15 members for each of the opposition, regime and civil society delegations), and starting the discussion on the constitution articles according to an agenda proposed by each party. However, the regime’s delegation submitted an agenda outside the context and work of the Constitutional Committee, as described by the Joint Head of the opposition delegation, Hadi al-Bahra.

The round of talks turned into discussions and submission of proposals by both sides, amid an attempt by the International Envoy to bring the points of views closer and reach an agreement on an agenda that would lead the delegations to sit at the discussion table. However, the regime delegation’s intransigence and rejection of any proposal that goes against its vision and desire has prevented this. Pedersen had then announced in a press conference the end of the round of talks without making any progress.

“National pillars”… The beginning of the farce

On October 31, the Syrian regime’s president, Bashar al-Assad, confirmed in an interview with the Syrian News Channel that the dialogue in the Constitutional Committee would last for months and perhaps more, describing it as “sophist”, which was evident from the first day of the second round of talks of the mini-committee, which Enab Baladi followed up from Geneva.

The opposition delegation presented a proposal for the round agenda on November 21, three days before the start of the round of talks. The opposition’s agenda included the adoption of a future plan of action, based on the discussion of constitutional articles covering the rights and freedoms, the three authorities (legislative, executive and judicial), security institutions, the army and the police, in addition to the discussion of the introduction to the Constitution, the fundamental principles and the state, in the second round.

In contrast, the Syrian regime did not submit any proposal on time, which prompted Pedersen to send his deputy, Khawla Matar, to the Syrian capital three days before the start of the round, in order to obtain an agenda, as Enab Baladi learned from sources within the opposition delegation. However, Matar returned empty- handed from Damascus.

With the start of the first hours of the round, the Syrian regime delegation put forward a proposal called “national pillars that concern the Syrian people.” The proposal included topics related to condemning foreign, especially the Turkish, intervention in northeastern Syria, combating terrorism, lifting the economic siege on Syria, and considering all those who bear arms in the face of the “State” as a terrorist.

However, the opposition rejected the proposal, and considered it irrelevant to the context of the Constitutional Committee’s work and an attempt to obstruct its work. The delegation then started submitting new proposals in order to keep up with the regime in its proposals and push it to the table of dialogue.

The regime delegation then presented a new proposal suggesting the entry of all delegations to the meeting room and each member’s discussion of what they want. This was rejected by the opposition delegation, through the statements of Hadi al-Bahra in a press conference on November 28, who said:, “We are not here in a cultural forum to have a dialogue and discussions while the explosive barrels are falling on the Syrians. We are here on a national mission to achieve a real and substantive political transition leading to peace in Syria.”

In light of the regime’s procrastination, it has become clear that Russia did not exert pressure on the regime’s delegation, contrary to the role that resulted in the formation of the Committee, as Russia was not oblivious to what has been happening in the United Nations and the repeated hindrance attempts, but did not intervene.

A source within the opposition delegation, who spoke on condition of anonymity, stressed that Russia’s goal is to send messages to the International Envoy, Geir Pedersen, because he talked in the Security Council, last week, about a consensus in the Committee, which Moscow considered outside his powers.

In his briefing to the UN Security Council on November 22, Pedersen praised the outcome of the first round of the work of the Constitutional Committee, and pointed out that it provided a wide exchange of ideas between the regime, opposition and civil society delegations.

The Russian side did not like Pedersen’s statements, prompting Russian Foreign Minister Sergey Lavrov to issue a warning to the UN Envoy’s office against intervention in the affairs of the Committee. He said, as quoted by Russia Today on November 25, that the Office of the UN Special Envoy must not make any intervention attempts, and stressed on the importance of achieving balance in the staff of the Office of the UN Special Envoy, “who must adopt the principle of equitable geographical representation enshrined in the Charter of the United Nations.

According to the source, Russia also asked the opposition delegation to discuss general constants related to ensuring the remaining of the Syrian state as inclusive messages to Syrians, and at the same time, there are common topics that can be discussed such as the social contract, the suffering of the Syrian citizen and the lifting of the siege. As such, the regime can find a way out and can send reassuring messages to its incubator that do not affect the opposition in general, which was totally rejected by the opposition delegation.

On the other hand, Moscow promised during a meeting of its ambassador in Geneva with the opposition delegation, last Thursday, that the next rounds will be better in terms of the effectiveness of meetings.

Pedersen has not yet set the date of the next round of meetings of the mini-committee of the Constitutional Committee. He assured the civil society delegation during a meeting last Friday that he will meet with Iranian, Russian and Turkish officials to determine the agenda of the mini-committee’s meetings, and that he will not invite delegations to the meetings before setting the agenda with the guarantor states.

The regime has showed a sense of procrastination in the work of the Constitutional Committee, which the opposition expected in its repeated media statements. Will the Committee enter into a sequence of figures such as Geneva and Astana? Or will the guarantor countries, especially Russia, have another stand by pressuring for a constitution leading to elections under the auspices of the United Nations?