Amid the military and political conflicts between the main actors in the Syrian file (the US, Russia, Turkey and Iran), a war of words in the past few days has emerged, over the oil wells in the northeast region of Syria; the region that US President Donald Trump has asserted his dominance over by keeping a number of US troops stationed there. 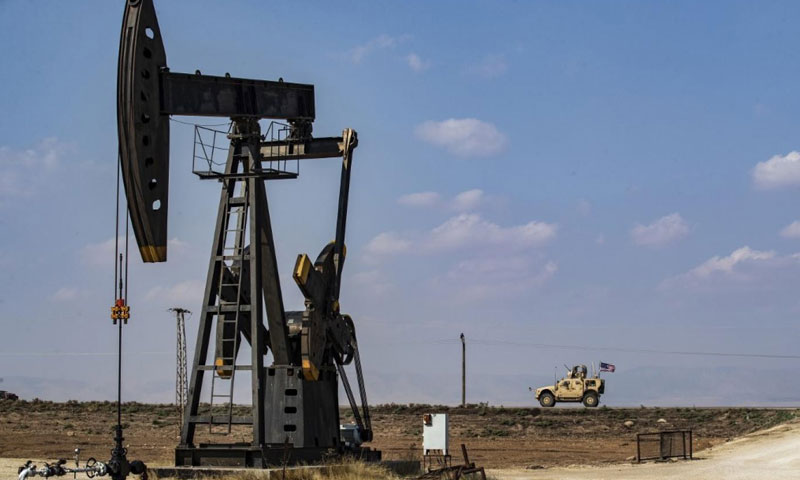 Amid the military and political conflicts between the main actors in the Syrian file (the US, Russia, Turkey and Iran), a war of words in the past few days has emerged, over the oil wells in the northeast region of Syria; the region that US President Donald Trump has asserted his dominance over by keeping a number of US troops stationed there.

Trump had bragged about the US efforts to control the Syrian oil wells on several occasions. He has maintained this stance through his official Twitter account and press conferences, especially during the period between 19 and 24 October. Hardly a day passes without him talking about the Syrian oil, and confirming his country’s intention to maintain and secure the wells.

The latest of those statements was on Friday, 1 November, when he confirmed in a meeting with his supporters in Mississippi that he wanted the US soldiers in Syria to return to their homes; however, he added: “We have secured the oil fields. I love oil.”

This statement was accompanied by threats made by US Defense Secretary Mark Esper, according to Reuters, on 29 October, to both Russia and the Syrian regime over any attempt to seize the oil fields from any party.

Amid this international struggle for oil, questions are raised about US motives. Is the amount of oil in Syria sufficient enough to induce the appetite of Americans to protect it, or are there other hidden US goals behind staying in the region and protecting oil wells?

Is Syrian oil attractive to other countries?

There are no independent and accurate exploratory studies on the quantities of oil in Syria, especially in the eastern region. The statistics on the quantities of oil were issued by the Syrian regime’s narrow circle (from the Republican Palace), as several oil engineers confirmed this to Enab Baladi. They also pointed out the absence of transparency under the rule of former President Hafez al-Assad, and his son, Bashar al-Assad. Thus, accurate studies and statistics about the Syrian oil are nonexistent, as research centers and the International Energy Agency (IEA) were satisfied by the figures released by the regime.

According to the IEA, Syria has 2.5 billion barrels in the form of oil reserves, which is equivalent to only 0.14 percent of the world’s oil reserves, according to a report published by the BBC on 29 October.

These figures are insignificant and cannot be the reason for other countries to fight over. However, the head of Economics and Business Administration Department at the American University of Humanities, Dr. Suhail al-Hamdan, claims that all the data on oil production in Syria are false, because it is defused by the regime.

In an interview with Enab Baladi, al-Hamdan said that the real figures about oil barrels entering the Syrian Petroleum Company, run by the regime’s government, are incorrect; adding that according to information from sources within the Company, oil production ranged, from the mid-1980s to the year 2004 between 1,45 million bpd, and 1,6 million bpd. Thus, the regime had announced the production of only 380,000 bpd which were integrated into the State budget, while the rest is sold by figures close to the regime.

Al-Hamdan explained that the regime avoided joining the Organization of Petroleum Exporting Countries (OPEC) as an oil exporter, as it would be then necessary to reveal the exact figures and statistics about the oil situation in Syria.

Speaking to Enab Baladi, oil engineer Ahmed al-Sawadi stated that Syrian oil quality varies from one region to another. Oil in the wells of Deir ez-Zor and its countryside is an excellent crude oil because it does not contain large amounts of sulfur, unlike the heavy oil in the wells of Hasakah.

Aside from Syrian oil’s attractiveness for countries to keep their armies or not, and the production figures that would be discovered if major countries’ companies conduct real surveys of the region, there are other American goals in keeping their troops around oil wells.

The first goal is that the oil can be used to fund Washington’s presence in the region as well as its allies in Syrian Democratic Forces (SDF), which reduces their costs from funds disbursed from the Pentagon’s budget, according to al-Hamdan.

The second goal is to deprive the Syrian regime and Russia of reaching these wells; thus, keeping the regime under an economic blockade, especially with regard to oil derivatives. This has angered Russia, which deemed in several statements last week Trump’s declaration of control of the wells illegal and accused the United States of smuggling oil worth more than 30 million USD per month from Syria.

The US has issued several warnings against those who contribute to supplying the Syrian regime with energy. Additionally, Washington has imposed, during the past years, economic sanctions on companies and people who contributed to the transfer of fuels. This has led to a fuel crisis in regime-controlled areas.

In a statement issued by the US Treasury on March 26, the Office of Foreign Assets Control (OFAC) updated its warning to the offshore oil shipping community to highlight the risks associated with transporting oil shipments to Syria.

According to al-Hamdan, the US’s third goal may be to conduct deals with the Syrian regime and Russia, through the introduction of a US company that would take over the wells of the region and legally give a proportion of oil exports to several parties, as President Trump noted in his statements.

“What I intend to do, perhaps, is make a deal with an ExxonMobil or one of our great companies to go in there and do it properly,” said the US president on 15 October. In another speech on Friday, 25 November, Trump stated that the US “will distribute oil, help the Kurds and other people, and help itself if allowed.”

Amid the conflict between these countries over the oil wells, Syrian citizens, especially those living in regime-controlled areas, fear that the coming winter will be like the previous one, when the shortage of fuel caused severe crises at gas stations and deprived many citizens of fuel oil for heating.