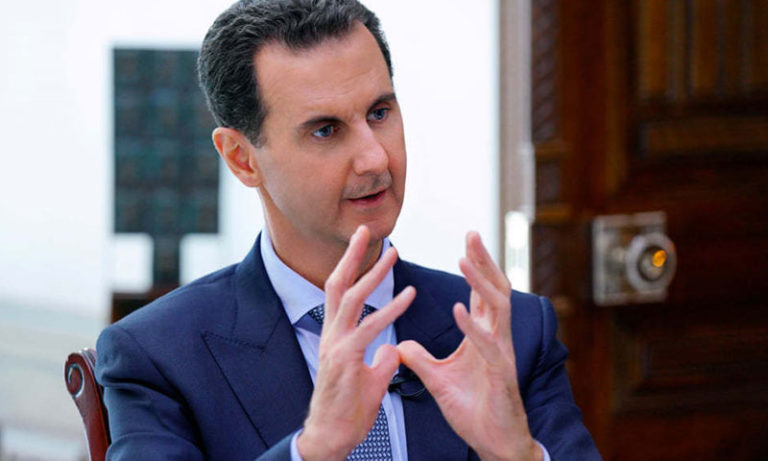 President of the Syrian regime Bashar al-Assad in an interview with the Syrian News Channel, October 31, 2019 (Presidency of the Republic of Syria) 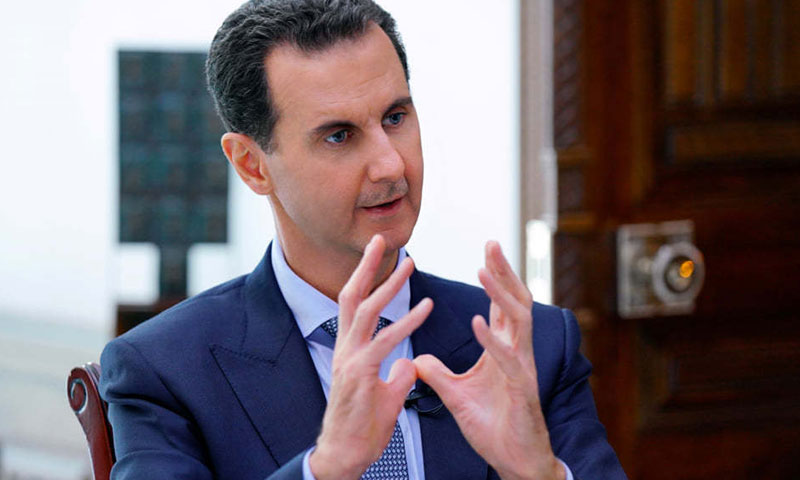 “This will only be in your dreams,” the Syrian regime’s president, Bashar al-Assad, said in a recent media interview, summarizing the messages he wanted to convey to his allies and opponents regarding his rejection of any future political solution that contradicts his vision. Assad’s statement comes against an international political and media tendency towards supporting the political settlement in Syria, mainly by Russia.

Al-Assad’s messages came within frequent media appearances with local and Russian media during the past two weeks, coinciding with the start of the meetings of the Constitutional Committee in Geneva to draft a new constitution that would lead to UN-supervised free and fair elections.

The headline of al-Assad’s three interviews was “No to anything,” implying his rejection of any future political move or solution in Syria that he is not part of or does not conform to his point of view and does not maintain his regime. This was evident when he talked about UN Security Council Resolution 2254, which is an essential reference for the UN-sponsored political negotiation process.

The resolution, adopted by the UN Security Council at its 7588th meeting, held on December 18, 2015, stated in its fourth item the Security Council’s “support, in this regard, for a Syrian-led political process that is facilitated by the United Nations and, within a target of six months, establishes credible, inclusive and non-sectarian governance and sets a schedule and process for drafting a new constitution.”

The resolution also supported the holding of “free and fair elections, pursuant to the new constitution, to be held within 18 months and administered under supervision of the United Nations (..) with all Syrians, including members of the diaspora, eligible to participate.”

However, al-Assad totally refused in his interview with the Syrian News Channel on 31 October the holding of UN-supervised elections, and stressed that “the elections will be from A to Z fully held under the supervision of the Syrian state. If we are to invite any other international party, states, associations, organizations, people, personalities, it does not matter… This will be under the supervision and the sovereignty of the Syrian State.”

Al-Assad’s rejection of the content of the UN resolution came hours after a joint meeting attended by foreign ministers of the guarantors of the Astana talks (Turkey, Russia and Iran) in Geneva before the start of the work of the Constitutional Committee.

The three parties issued a joint statement in which they announced their adherence to a UN-supported political process between the parties of the conflict within the framework of the UN resolution.

No to the Constitutional Committee

Along with his rejection of Resolution 2254, al-Assad blew up the work of the Constitutional Committee, before it even seriously launched its work after it held one round of meetings ending on 8 November.

Al-Assad also disavowed the regime’s official participation in the Committee meetings, and considered that the delegation is supported by his government and does not represent it, as “the first party is the one that represents the Syrian government’s point of view, but the Syrian government is not part of these negotiations or this discussion.” He considered that “these people [the regime’s delegation in the Constitutional Committee as the United Nations calls it] are from the same political environment as the Syrian government, but that does not mean that we, as a government, are negotiating. From a legal standpoint, we are not part of the Constitutional Committee, nor does this mean that the government recognizes any party.”

In addition, al-Assad described the second party, which represents the opposition’s Syrian High Negotiations Committee (HNC), in an interview with TV channel Russia 24 and Rossiya Segodnya news agency on 15 November, as a Turkey-US-designated delegation, saying that “this goes against logic and reality. Everyone in the Committee must be affiliated with the Syrian public and the Syrian people, and cannot be affiliated with a foreign country.”

The Syrian regime’s president also considered that among the delegation of the second party are members of Jabhat al-Nusra, which he described as a “terrorist” group, pointing out that some of the participants are “terrorists,” but “in the end we agreed on a number of these and this was perhaps a surprise (…) We said that this is the same result, same background, same affiliation and same leader,” as he put it.

No to a transitional body and the Geneva process

Al-Assad also rejected the Geneva process, which should lead to the formation of a transitional governing body under Resolution 2254, and considered it an American trick aimed at overthrowing his regime through a “temporary body.” “Geneva is an American trick based on the political gains that they could not achieve, through demonstrations first, and through terrorists later, and thus achieving this through the political process,” al-Assad said in an interview with Russia Today (RT) on 11 November.

Al-Assad added that the Geneva process had failed, because it was “aimed at overthrowing the government through an interim body, regardless of its name, and then comes the peaceful change of the government and their control over Syria, as they did in many other countries.”

As for the ongoing negotiations in Geneva, including the Constitutional Committee’s meetings between opposition and regime delegations under UN auspices, al-Assad considered that they are part of the path of Sochi (held in Russia in early 2018), but they are only being physically conducted in Geneva. “The meetings and the political process that took place in Geneva are still within the Sochi path, but it does not matter where they are being held or where negotiations begin, as Geneva is only the place and geography, while it is a Sochi path par excellence,” explained al-Assad in an interview with RT.

He also stressed, during an interview with Syrian television, that “Geneva does not exist and is not part of this issue,” pointing out that the regime referred back to Geneva from a geographical perspective, “yet this is politically part of the Sochi process. All that happens is a part, continuation and reference of the Sochi process.”

Al-Assad’s statements represent therefore his rejection of any future political process that may start from the work of the Constitutional Committee. But this may be contrary to the direction of Russia, which pushed forward for the approval of the formation of the Constitutional Committee, according to frequent statements by Russian officials and Syrian oppositionists.

Russia is also trying to pressure the Syrian regime delegation participating in the work of the Committee. This was evident by the pressure of the political advisor to the Russian UN envoy to Syria, Vitaly Naumkin, to accept the agenda and not to obstruct the meetings, as stated by a member of the Committee from the civil society delegation, who asked not to be named, to Enab Baladi.

Amid al-Assad’s statements, which were met by the silence of the opposition first and the United Nations second, the Constitutional Committee is preparing to hold the second round of meetings on 25 November, with the participation of the three parties (the regime, the opposition and civil society).