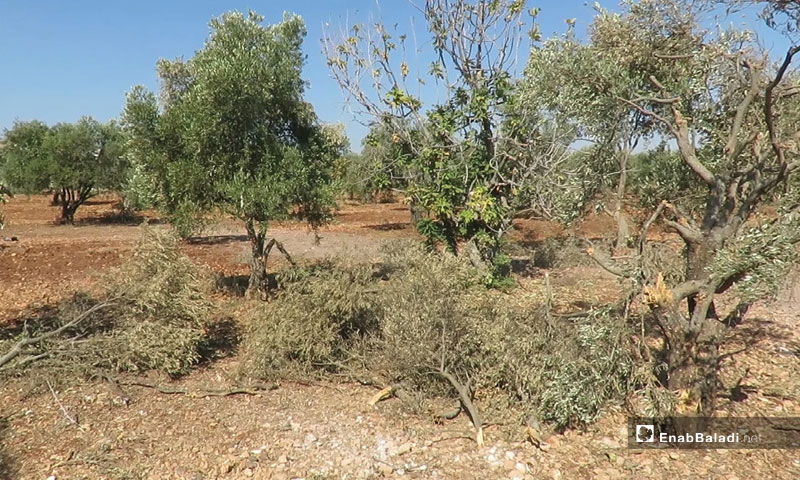 The olive groves in the southern countryside of Idlib have been adversely affected by bombardment and displacement in months of military campaigns launched by the Syrian regime forces and their Russian ally on the area since February. Although a ceasefire-agreement was declared two months ago in Idlib province, repeated violations of the agreement deprived the farmers of their long-awaited harvest.

Most residents of the southern Idlib countryside rely on the olive harvest as their source of livelihood. However, the continuation of aerial bombardment and the escalation of Russian raids on the area since mid-October threaten the farmers with losing their income. The farmers already suffer from displacement, high cost of living, insecurity and lack of basic services in the camps of northern Idlib countryside as winter approaches.

The head of the local council of the town of Maarat Harma, Diaa Haj Ahmad, told Enab Baladi that the town has about 2,500 dunams (2.5 sq km) of olive trees, which were expected to produce about 275 tons of olive oil this year. Nevertheless, the continuous shelling caused damage to “a large number of trees” and hindered the return of the farmers to collect the harvest.

Ahmad al Haj Mustafa, a farmer from the village of Arinba, in an interview with Enab Baladi, said that olive trees were not only affected by bombardment, but also by lack of care. Farmers left the trees with no care which made them liable to diseases and pests. “I have 15 dunams of olive trees that I could not care for this year. I was not able to water or offer them any special care because of the ongoing bombardment on the village and agricultural lands. Moreover, I could not clear the weeds nor provide treatment to sickly trees.” Last year’s olive harvest suffered from an insect epidemic on addition to the olive fruit fly infections.

The town of Maarzita, which lies on the contested border between Syrian regime forces and opposition forces, has been under shelling for months, preventing the farmers from accessing any of their lands, according to farmer Khaled Qutaish.

Qutaish lives in a slum-like refugee camp in difficult conditions and little protection from the elements. He hopes he will get some aid to get by. Either by somehow being able to reach his land, or through compensation. He told Enab Baladi that he fears that the regime forces will confiscate his olive crop, “as it did with the pistachio crops in Khan Shaykhun” during its advances in Idlib last August.

Agriculture in Syria has suffered damage and decline during the eight years of the Syrian conflict, which has killed hundreds of thousands of people and displaced half of the population.

According to the state-run news agency (SANA), Mohamed Habou, director of the olive office at the Ministry of Agriculture, said that olive production is to reach 830,000 tons while olive oil production is estimated at 150,000 tons. The province of Latakia comes first in production with 168,000 tons, followed by Idlib with 161,000 tons.

The Food and Agriculture Organization (FAO) of the United Nations in its humanitarian response plan set a goal of assisting 3.5 million people with 120 million USD in projects that support agricultural production and reduce food insecurity. 6.5 million people are currently suffering from food insecurity and a further 2.5 million are at risk of falling into that category.