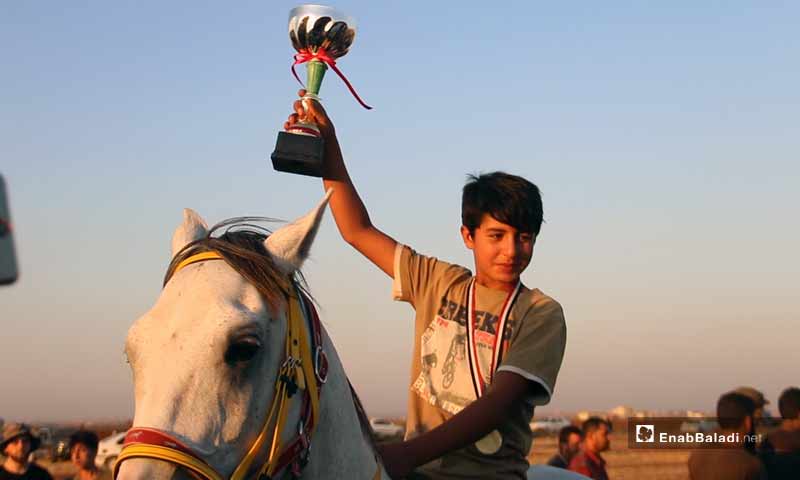 Binnish, a city in the Idlib countryside, held a festival to celebrate the local traditions of equestrianism. The Arabian Horse festival included horse racing events and showcased local horse breeders. The festival, held on 9 October, was the result of collective efforts from the Binnish Sports Club, Al-Fajr Arabian Horse Association, and Shafak and Makani civil society organizations.

The participating horses came from three main breeders, Mahasina, Wataniya and al-Ghashm. The horses competed on a race track on 1,200 meters over three rounds.

Badea Abras, one of the festival organizers from Makani Center, told Enab Baladi that between 30 to 33 horsemen competed in the race. The winners were awarded trophies and gifts presented by the organizers.

The first-place winner, Ali Daham, is a 12 years old boy, who overcame more experienced horsemen to collect the first prize. According to Dahham’s father, it was Ali’s passion for horses, and his dedicated training regime over the past two years that allowed him to compete successfully in several races this year and culminated with his win at Binnish.

The festival attracted a large crowd of equestrian aficionados and was celebrated by a traditional Arada (a Damascene folk dance).

In an interview with Agence France-Presse, Mohammed Ghayath al-Shayeb, director of the Thoroughbred Arabian Horse Office, pointed out that the horses have also been affected by war.  The war has led to a reduction in the number of horses from 8500 to 5500 since 2011,

The Al-Fajr Arabian Horse Association, founded in northern Syria in 2016, initiated many campaigns to preserve important horse breeds. The association organized several horse races and events in the countrysides of Aleppo and Idlib.

The head of the association, Mohammad al-Efendi, stressed that there were 200 horses not officially registered in the list of the World Arabian Horse Organization (WAHO). Moreover, the association estimated that by 2017, almost 40% of the local horses had perished due to the war in northern Syria.

Last September, the association established an equestrian club in northern Idlib. The association had already opened a club in the western countryside of Aleppo two years ago. It has also organized multiple horseback riding programmes for youth since its inception.