Darkush: A festival for pomegranates 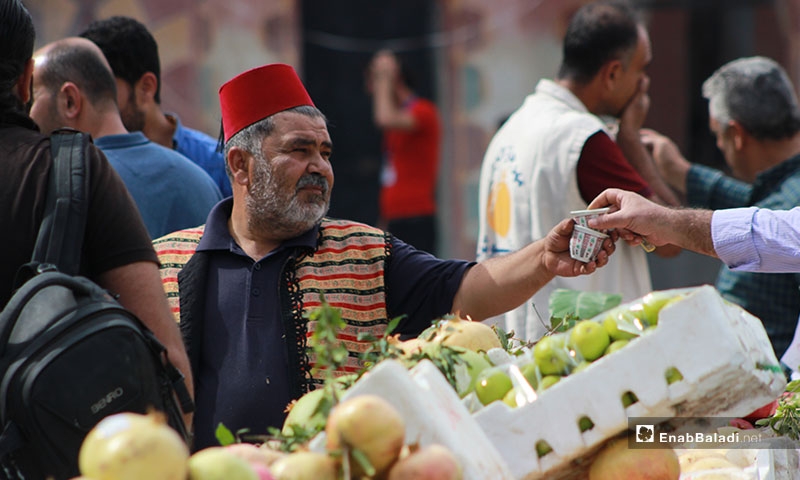 The local council of Darkush town in the western countryside of Idlib held the town’s second pomegranate festival on 11 October 2019. The festival hosted events and new competitions, celebrating the town and its crops.

The organizers and participants of this year’s festival shared their message of resilience with the world, amid the prevailing difficult security conditions in the region. The Syrian regime with its Russian ally has been conducting a military campaign on these areas for six months, leading to the displacement of more than one million persons.

The town of Darkush, on the Orontes River, is famous for cultivating pomegranate trees. According to Obaida Dandoush, a first time visitor, many of the visitors of the festival had never known the town before.

Dandoush told Enab Baladi, that locals introduced visitors to their customs and the town’s traditional cuisine. They also introduced them to the types of pomegranate fruit which varies widely in color and taste.

The festival also gave awards to farmers according to the quality of their produce in each pomegranate type . The first category, the al-Asfori pomegranate prize went to the farmer Nidal Jazzah. Jazzah expressed his happiness and pleasure when receiving the trophy and the medal, noting that this prize is ‘meaningful, great and very precious.’

Jazzah added that these awards aside from their symbolic value, encourage farmers to make the best possible crops and products.

Jazzah told Enab Baladi that the farmers took part in the festival to show “the difficulties they face in finding a market to sell their crops and products as well as the higher costs of production that do not match the selling price.” Jazzah added that he wished the festival’s events would contribute to improving the agricultural conditions of the town.

Saber Umrani, a member of the organizing committee, added that the festival was held to send a “message to the world that, despite the ongoing bombardment, destruction, killing and displacement, we are a living people that is opposed to this regime and its Russian and Iranian allies. We are rooted in our land.”

Debuting at this year’s festival was a food fair, a Darkush handicraft exhibition as well a boat race and exhibition, according to Umrani.