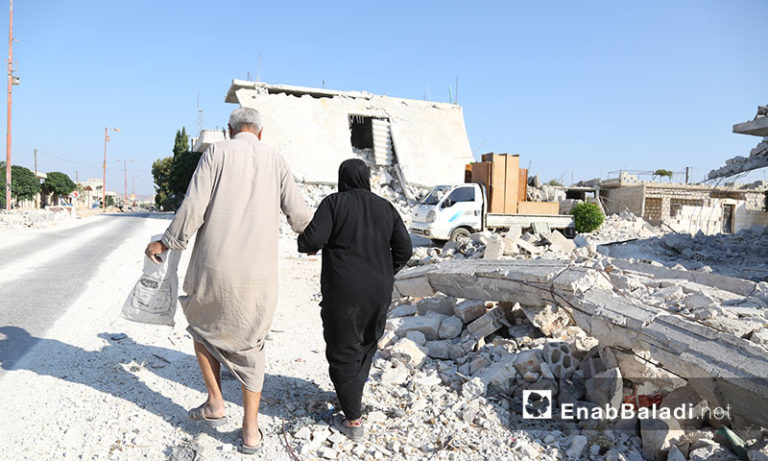 Displaced people taking advantage of the relative ceasefire to move the furniture of their destroyed houses in the southern countryside of Idlib, September 6, 2019 (Enab Baladi) 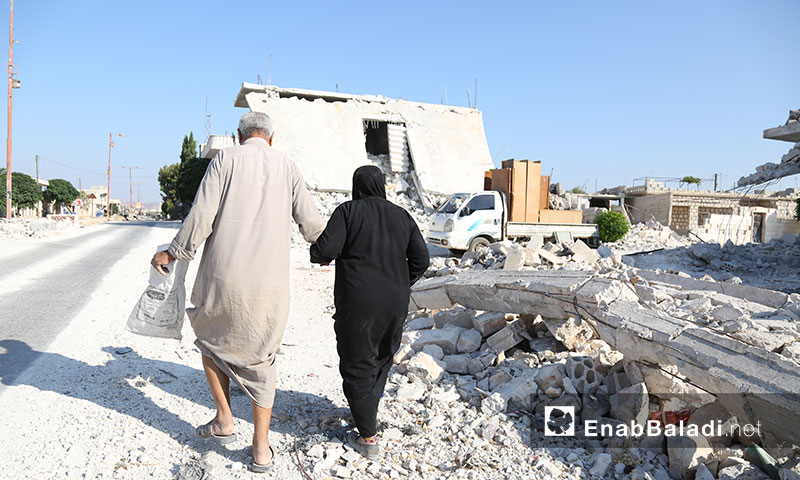 Amid a cautious calm, areas in the southern countryside of Idlib started witnessing a relative return of residents to their houses, after Russia’s announcement of a ceasefire in the area on August 31, prompting some organizations to organize awareness and guidance campaigns to alert the displaced returnees to the presence of war remnants and cluster munitions in the areas to which they have returned.

Since the beginning of September, the field teams of the Syrian Humanitarian Response Coordinators have been distributing awareness brochures to the displaced people returning to the villages and towns of the southern countryside of Idlib, through teams at the entrances to cities, villages, and towns where population is returning, that provide advice and guidance on what to do when finding explosive remnants.

The director of the Syrian Humanitarian Response Coordinators team, Mohammad Hallaj, said in an interview with Enab Baladi that the awareness program included the distribution of leaflets to returning displaced residents and local councils, pointing out that the main focus would be on the category of children, as it is the largest segment that could be affected by war remnants and explosives.

What are the war explosive remnants?

The term “war explosive remnants” is used to describe a wide range of explosive or unexploded ordnance left behind in certain areas after the end of military operations, including artillery shells, grenades, mortars, sub-munitions, missiles, mines, etc.

According to the figures of the Humanitarian Response Coordinators, 13,671 civilians have returned to their areas in the villages and towns of the southern countryside of Idlib, from August 31 to September 6, as a result of the relative ceasefire in these areas, amid expectations of the arrival of more displaced civilians and their return to their houses, in case the situation continues the way it is now.

The director of the Humanitarian Response Coordinators told Enab Baladi that raising residents’ awareness about the war remnants has become an urgent need during the recent period, during which the northern countryside of Hama and the southern countryside of Idlib have witnessed intensified bombing by the Syrian regime and Russia, during the military campaign that started in April.

He pointed out that the area is expected to have cluster munitions and unexploded remnants, as a result of the heavy shelling. Therefore, the return of displaced people to their areas poses a great threat to their lives even if the shelling has stopped. It is necessary to organize awareness campaigns in coordination with the competent organizations working in the region, especially as the remainings of war explosives can cause several injuries amounting to amputation.

Hallaj explained that in case unexploded remnants of war are found, relevant military staff must be notified so that they could dismantle it. Also, the Syrian Civil Defense Organization are operating in the area and “effectively” contributing to solving such an issue, according to the Director of the Syrian Humanitarian Response Coordinators.

Entitled “I know that the first mistake may be the last,” the Response Coordinators team provided a set of guidelines that displaced returnees must follow to prevent the explosion of remnants of war, in case there are any in their areas.

Enab Baladi reported some of these guidelines, which go as follows:

Humanitarian Response Coordinators noted that suspicious objects could occur in attractive forms, prompting children to approach, carry or step on them, calling on relevant authorities to take the necessary action to clear areas of explosive remnants of war.