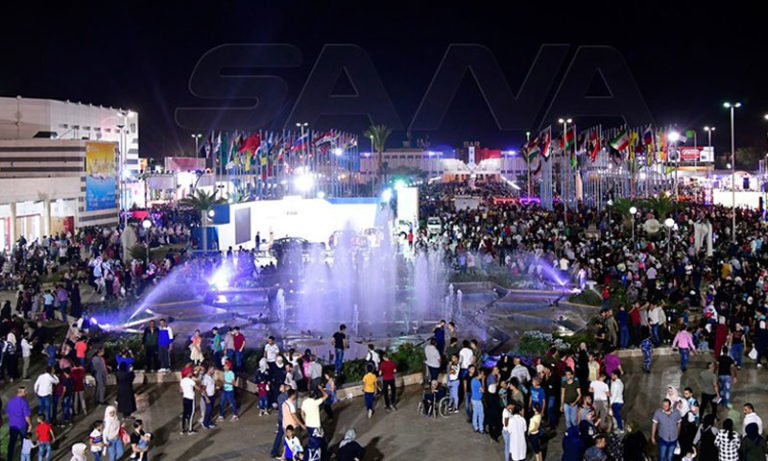 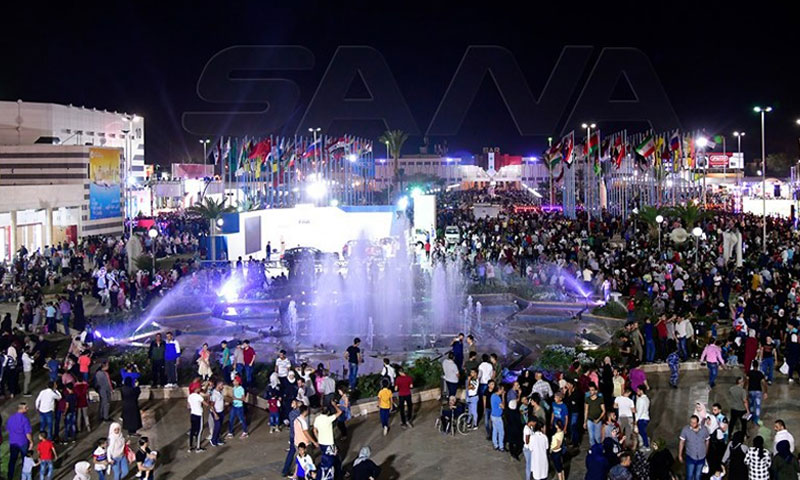 The activities of the 61st Damascus International Fair, which was held in the Syrian capital between August 28 and September 6, were launched under the slogan “From Damascus to the World.” Through this event, the Government of the Syrian regime aimed at creating a new decisive stage and a turning point in Syria’s political and economic future, stressed Prime Minister Imad Khamis before the start of the fair.

The government tried through its official and pro media outlets to widely promote the fair and frame it by messages conveying that Syria has recovered from the effects of the war and started the reconstruction phase, with the aim of attracting investments and encouraging the return of Arab and foreign companies to contribute in the future reconstruction phase, said Doctor of Business Management, Omar Mohammad, to Enab Baladi.

Were the exhibition goals met?

Despite the extensive media coverage of the fair before its launch and the promotion of its events during its organization, its presence remained below expectations, in terms of the number of visitors and participating countries compared to the previous two sessions, according to figures issued by the Public Establishment for International Fairs and Exhibitions.

Few concluded contracts due to US sanctions

As for the number of concluded contracts on the sidelines of the exhibition, it reached in the fair’s previous session in 2018 about 740 contracts, worth $ 15 million, in the food, agricultural, engineering, chemical and textile sectors, stated the Minister of Economy and Foreign Trade to local newspaper al-Watan. In contrast, the number of concluded contracts in the 2017 session reached about 650, and the value of freight subsidies for export contracts exceeded one billion Syrian Pounds (two and a half million dollars at the exchange rate of 400 Pounds per US dollar at the time).

The number of signed contracts in the current session is still unknown, stated the Minister of Economy, Samer al-Khalil, to al-Watan newspaper, on September 5. Al-Khalil stressed that “the value of contracts cannot be determined in the foreseeable future, especially as the signed contracts are varieties. Part of these is signed between local traders and businessmen, and another part is signed between foreign and Syrian businessmen, including export contracts.”

Despite the unknown number of concluded contracts, these were limited to countries supporting the Syrian regime, such as Russia and Iran, in several sectors, such as oil and exportation of products.

The Minister of Economy and Foreign Trade told Russian News Agency “Sputnik” on September 5 that “a number of agreements and contracts have been concluded with Russia, Crimea and South Ossetia during the current session.” Three contracts were signed with Russian companies, which are concerned with surveying, drilling and production in the oil sector, in addition to import and export contracts with Crimea worth 250 million dollars.

The absence of important contracts with Arab companies attending the exhibition was remarkable, namely the UAE and Oman. Dr. Omar Mohammad attributed this to the US threats, stressing during an interview with Enab Baladi that the Damascus International Fair is an opportunity to make deals with companies and businesspersons, and for the regime to promote for itself. However, the US threats to impose sanctions on any company or economic entity choosing to sign any contracts with the regime prevented this from happening.

The United States warned companies and individuals against participating in the Damascus International Fair, and issued a statement via the official Facebook page of the US Embassy in Damascus, on August 23, saying that the participation of commercial companies and individuals in the Damascus International Fair and establishing a business relationship with the Syrian regime shall expose them to US sanctions.

“The United States strongly discourages businesses and individuals from participating in the Damascus International Trade Fair, [for] al-Assad regime continues to use its financial resources to carry out vicious attacks against the Syrian people. Anyone doing business with al-Assad regime or its associates will be enabling the regime to continue its campaign of murder and oppression against Syrians,” the statement said.

The coverage of official and pro-regime media reveals the amount of attention the UAE and Omani delegations are enjoying, while other delegations, especially Russian and Iranian, are being ignored unlike the last two sessions.

Bakkar told Enab Baladi that the Syrian regime would benefit from Gulf and foreign partnerships at the level of individuals and companies, in addition to the importance of the participation of government delegations, as they carry diplomatic messages engaged with the economic messages of the regime and the international community aiming to set ground for future relations and cooperation with the Syrian regime.

However, Bakkar believes that the Gulf openness will not produce any positive results, because the Syrian regime is not politically and economically ready. It is weak and only shows signs of strength with strong partners. In case any one of them (Russia and Iran) would decide to abandon the regime or create a new balance in the region, the system will be doomed.

Bakkar stressed that the country shall be evaluated according to productive force, labor force, trade balance deficit and the basic products it exports. However, nowadays most of the products available in Syria, including sovereign products such as wheat, are coming from imports rather than domestic production.

Recently, the UAE and some Arab countries were trying to restore economic and political relations with the Syrian regime, opening embassies and reopening land routes linking Syria to the Persian Gulf. However, the US has warned against the return of the regime to the Arab League and the restoration of economic relations.