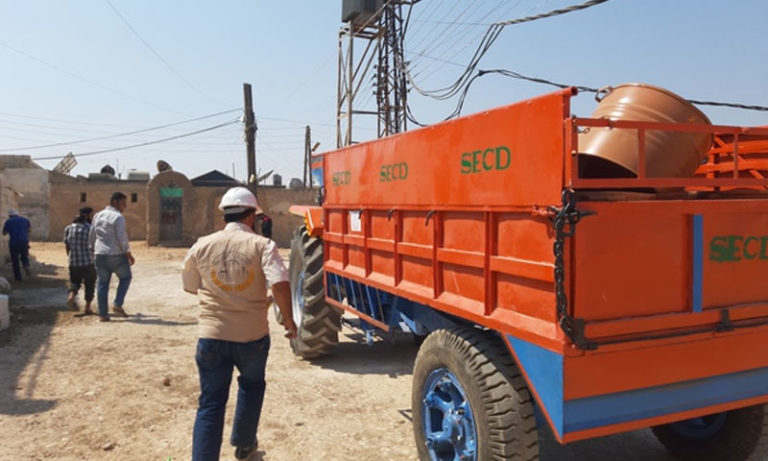 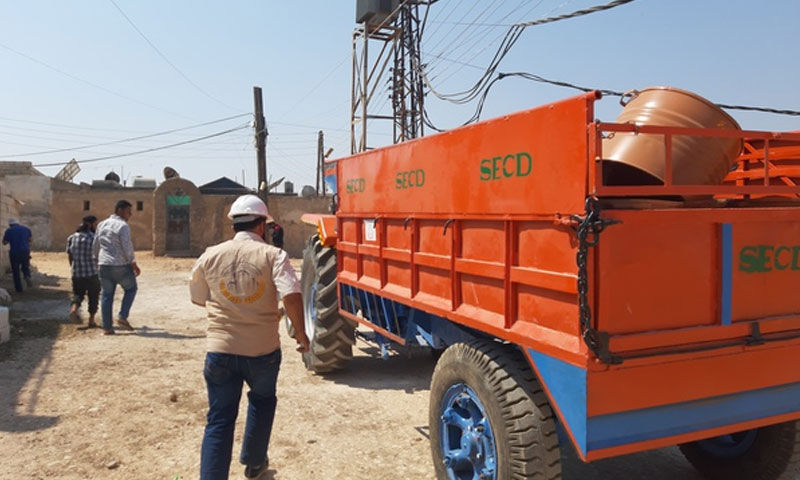 The town of Ayn al-Bayda, in Jisr al-Shughur area of ​​the northern countryside of Idlib, has been neglected and forgotten over the years, until the Syrian Engineers Organization for Reconstruction and Development (SECD) started two months ago implementing its project of cleaning and fixing water and sewage lines.

SECD was the first organization to fulfill its promises in the forgotten town, said Mohamed Ali, Deputy Head of Ayn al-Bayda Local Council.

During the years of conflict, the town has been left without services, Ali clarified, attributing this to the town’s proximity to the fighting fronts since the beginning of the armed conflict.

The SECD conducted a study on the area and developed a plan to meet the needs of the town, which lacked a sewage network, potable water and garbage drainage. The organization also developed plans for two villages of al-Hambushiyah and Foz – Zuf in the countryside of Jisr al-Shughur, the village of Yakid al-Adas in the western countryside of Aleppo and the village of Qanater in the southern countryside of Aleppo, before starting the implementation of its ongoing project for the following two months.

Aids and complete fulfillment of needs

The project aims at maintaining water and sanitation systems, equipping wells and providing generators and machinery needed for the work of the anti-pollution teams in needy villages, claimed Hazem Ghurab, the organization’s logistic assistant.

The organization also provides the needed fuel and oil for the operation and maintenance of generators and machinery, as well as chlorine to sterilize water throughout the project implementation period.

According to its official information, the SECD, a non-governmental and non-profit organization established in Aleppo in 2011, has devoted several days within the project’s period to sweeping and cleaning the streets of villages with equipment handed over to local councils, starting a permanent cleaning cycle every three days.

The organization provided the required machinery and tools for the councils, containers and clothes for the cleaners, and prepared awareness leaflets to be distributed to the people at the beginning of the campaign, which aims at combating environmental pollution in those areas.

Mohamed Ali believes that the benefits to the villagers will be of physical, environmental, health and aesthetic dimensions.

Diseases have been spread in the town as a result of contamination caused by sewage pits and garbage that people had to collect and burn themselves, before a villager donated a tractor that facilitated the task, and the rest of the people contributed to its operation by providing monthly donations of up to 500,000 Syrian Pounds.

Citizens were paying a monthly sum of 8,000 to 10,000 Syrian Pounds to access to drinking water, which has been cut off from the town since 2011. Fortunately, this project will reduce that cost to only 2,000 Pounds, according to Ali’s estimates, after the completion of the project and the organization’s support, which will continue for three months.

According to UN estimates, 270,000 residents of the northwestern region of Syria need assistance in the hygiene, water and sanitation sector, as a result of the recent military campaign, out of 15.5 million residents who need assistance throughout Syria, while 6.2 million people suffer from a severe shortage in this sector.