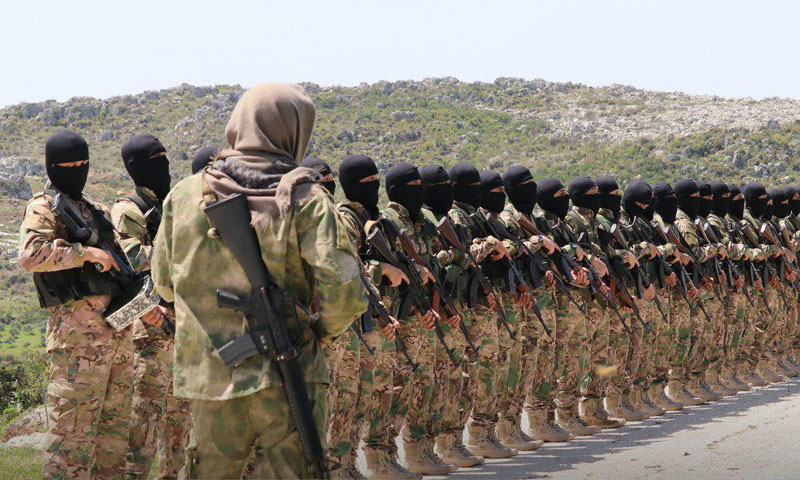 Unlike the circumstances that the areas of eastern Ghouta and Daraa bore witness to, Idlib had its own version of territorial reality.  Assad forces failed to achieve a progress, resembling the one they realized in the past years in the areas that underwent “settlement” deals, for they were taken aback by the resistance of the factions of the Free Syrian Army (FSA), which followed special tactics in their actions, deploying anti-armor rockets that did not cease in the past 13 days.

The discrepancy between Idlib’s status and that of the areas included in the “settlement” deals which Astana talks facilitated for has to do with the militants operating in the governorate. These militants all belong to a set that refused the deals, and they have all left their original areas in disapproval of the Syrian regime’s policies and its authorities regaining the shape they had before 2011. This is in addition to the fact that they have no other destination to proceed to in case of surrender, for Idlib is the last area that the Syrian opposition keeps hold of.

The militants-related reasons are not the only justification for the different scenarios, as Idlib’s current state is also related to the active international actors. Turkey, for instance, is yet preserving its 12 observation posts in the governorate, which have been established throughout the past tow years under the “Astana” talks, while it continues to support the Free Army’s factions, on top of which is the National Front for Liberation (NFL) that al-Sham Legion leads.

The statements made by Ankara are also an indicator of Turkey’s intention not to let go the position it has concerning Idlib, being a guarantor state to the Sochi deal, reached in September 2018, and an international player that does not want any of the Syrian affair’s cards slipping out of its hands.

In the latest developments of the territorial conditions, Assad forces managed to control the town of Kafr Nabudah and Qalaat al- Madiq, advancing as far as the town of al-Hwaiz in al-Ghab Plain, western rural Hama, covered by the Russian warplanes and helicopters.

Assad forces, as the territorial control map shows, are attempting to go deeper from the south to the north of al-Ghab Plain area, in a step to arrive in the city of Jisr al-Shugur, western rural Idlib. This front is different from the one they started in the beginning, which was the southern rural Idlib’s axis. There, they stopped at the al-Habit town, administratively bound to Khan Shaykhun, despite it being easy to control, for the area was already considered militarily fallen.

In spite of the progress that Assad forces achieved, they were met by an intense resistance from the opposition factions, which utilized a special policy during the battles, using the anti-armor rockets they recently received from Turkey.

In the past a few days, NLF’s platforms posted videos and footage incessantly, documenting attacks on the Syrian regime’s vehicles and its military groups while they advanced in the western rural parts of Hama, which terrain gave a large space for deploying rockets and heights helped in monitoring Assad forces and their vehicles on their progress.

The opposition factions’  resistance and their deploying the rockets can be considered as the first Turkish message to Russia, indicating that the area is not similar to those they previously controlled and that there must be a commitment to the borders agreed upon in “Astana” and to the retreat of the Syrian regime, which the Turkish Minister of Defense, Hulusi Akar, has stressed in recent statements.

Even though the rockets were extensively used in the western rural Hama, the front of the al-Kabaneh, in rural Latakia, bore witness to fierce battles during which Assad forces failed to progress, not even for a meter and lost dozens of troops and vehicles during their incursion of the area, classified as one of the most strategic areas in Northern Syria.

The village of al-Kabaneh, which Assad forces are trying to control, is located on the most strategic hilltops in rural Latakia and is one of the opposition’s key posts in the mount al-Akrad.

The village’s strategic location enables the side that controls it to monitor large areas of the western rural parts of Hama and Idlib, in addition to the villages of the northern countryside of Latakia.

The village separates the coast from Idlib governorate, while it constitutes the latter’s gate from the west. It also overlooks the al-Ghab Plain, Jisr al-Shugur and the Turkish borders, as well as a huge space in Idlib, Hama and Latakia.

A Controversial Condition between Turkey and Russia

The complexity of the affairs and the on-ground developments in Idlib are not limited to the local fighting sides, but they also apply to the two major international actors, Turkey and Russia, which are discussing a ceasefire that a controversial condition challenges: Syrian regime’s withdrawal from or stay at the areas it advanced to.

Abu Subbhi Nahass, the Head of the Political Office of the “National Front for Liberation” (NFL), said that there are negotiations between the Russians and the Turks as to reach a ceasefire in Idlib, at Russia’s request.

Turkey approved the ceasefire. However, it stipulated that the Syrian regime withdraws from the areas it advanced to. Turkey presented the suggestion to the NFL factions, which they refused unless the regime retracts.

A ceasefire was brought to the table in the governorate, following the first meeting of the joint Turkish-Russian workgroup in the capital Ankara, which has been examining the situation in Idlib governorate in the past a few days.

The remarkable thing is that the ceasefire was demanded by Russia, which means that Moscow has clearly received the Turkish message , especially that it was militarily challenged by the FSA factions, while it was met by a Turkish stubbornness, as the latter refused to dismantle the observation posts in the area, particularly the one in Share al-Maghar, Shashabo Mountain, which was repeatedly targeted and Assad forces reached its western perimeters by controlling the town of al-Hwaiz.

It is clear that the Russians are today trying to announce a truce in Idlib, and though the goals behind this step are yet unclear,  the pacification might be used as to exploit what has been gained throughout the past two weeks in western rural Hama or to win time as to rearranged its affairs on the ground, in preparation for a greater plan for the governorate and its surrounding in the northern Latakia countryside and the rural parts of Hama and Aleppo.