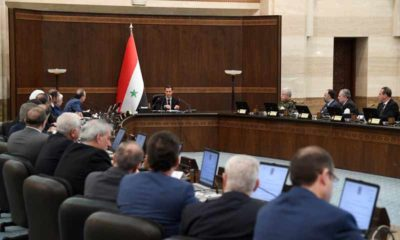 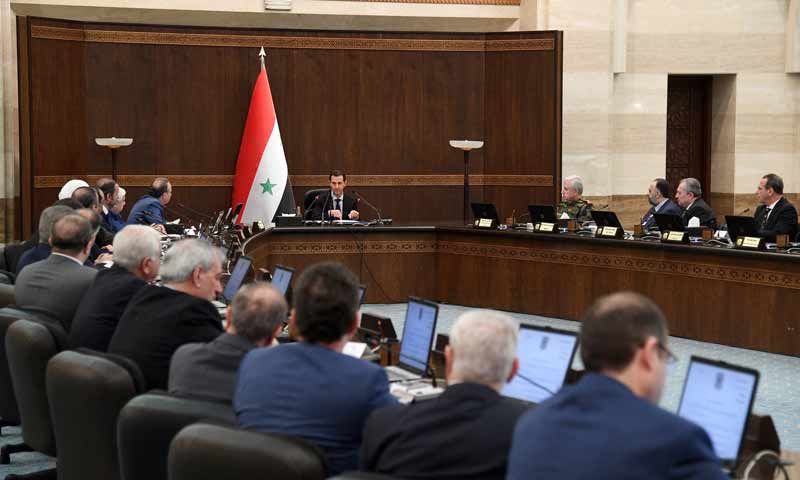 In October of 2018, and during the approval Syria’s upcoming budget by the Supreme Council of Economic and Social Planning in the Syrian regime’s head of government, Imad Khamis, promised citizens that 2019 would be a year of revitalization and return of the country to the pre-war period, saying that “the budget focuses on securing requirements of state operations, and the expansion of agricultural and industrial production and the role of the private sector.”

On October 21, 2018, the official news agency SANA considered that “the draft budget took as a starting point the gradual improvement and recovery that began to appear in the Syrian economy, with the return of many economic sectors to production.”

However, the economic reality in areas under Syrian regime control, and the crises plague it such fuel shortages and inflation, contradict Khamis’ remarks and render his mission impossible and meaningless, as his “cosmetic” comments no longer have any media impact, according to the head of the Syrian Economic Task Force, Osama al-Qadi, speaking to Enab Baladi.

In light of the livelihood conditions of most citizens, questions are raised about where the promises Khamis had made disappeared, and how the budget of 2019 was spent?

However, al-Qadi explained that the wheat and oil derivative subsidies, and the payment of salaries of public employees alone had devoured the 2019 budget, and that the budget deficit would become evident soon, saying, “By raising the procurement price of wheat from farmers to 185 SYP per kilogram (185,000 SYP pounds per ton), the purchase of 2.5 million tons of wheat (according to the government), will cost the regime’s government a sum of 462 billion SYP, on top of the 1,766 billion SYP for fuel subsidies. According to the Minister of Oil, Ali Ghanem, there is a need for 8.8 million USD per day (at an exchange rate of 550 SYP per USD). As for the aggregated salaries of one and a half million employees in the public sector, or a million employees less than 2011, this amounts to at least 1,200 billion SYP annually.” 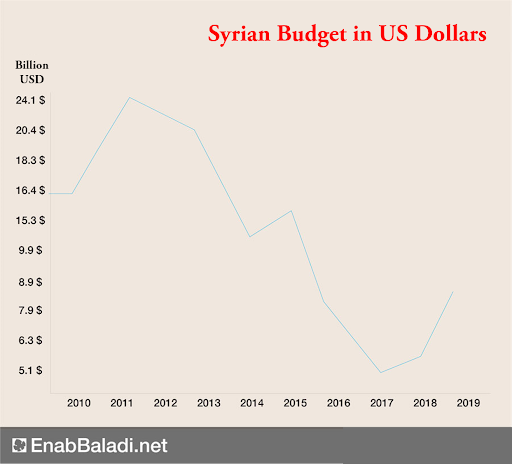 Al-Qadi added, “We are talking about the need for at least three trillion SYP for wheat, fuel and public salaries alone, and this devours almost all the 2019 budget. There will remain no budget for investment spending, health, construction, electricity, official media or other items of the budget.”

On April 30, the Syrian regime’s government allocated 400 billion SYP to the procurement of wheat from farmers, while it allocated 361 billion SYP to the general budget. As for fuel subsidies, the Minister of Oil, Ali Ghanem, stressed in an interview with Syrian state television, on April 29, that Syria needs 4.4 billion SYP per day (8.8 million dollars per day at an exchange rate for 500 SYP against the US Dollar), which amounts to 1,600 billion SYP annually (2.9 billion USD). 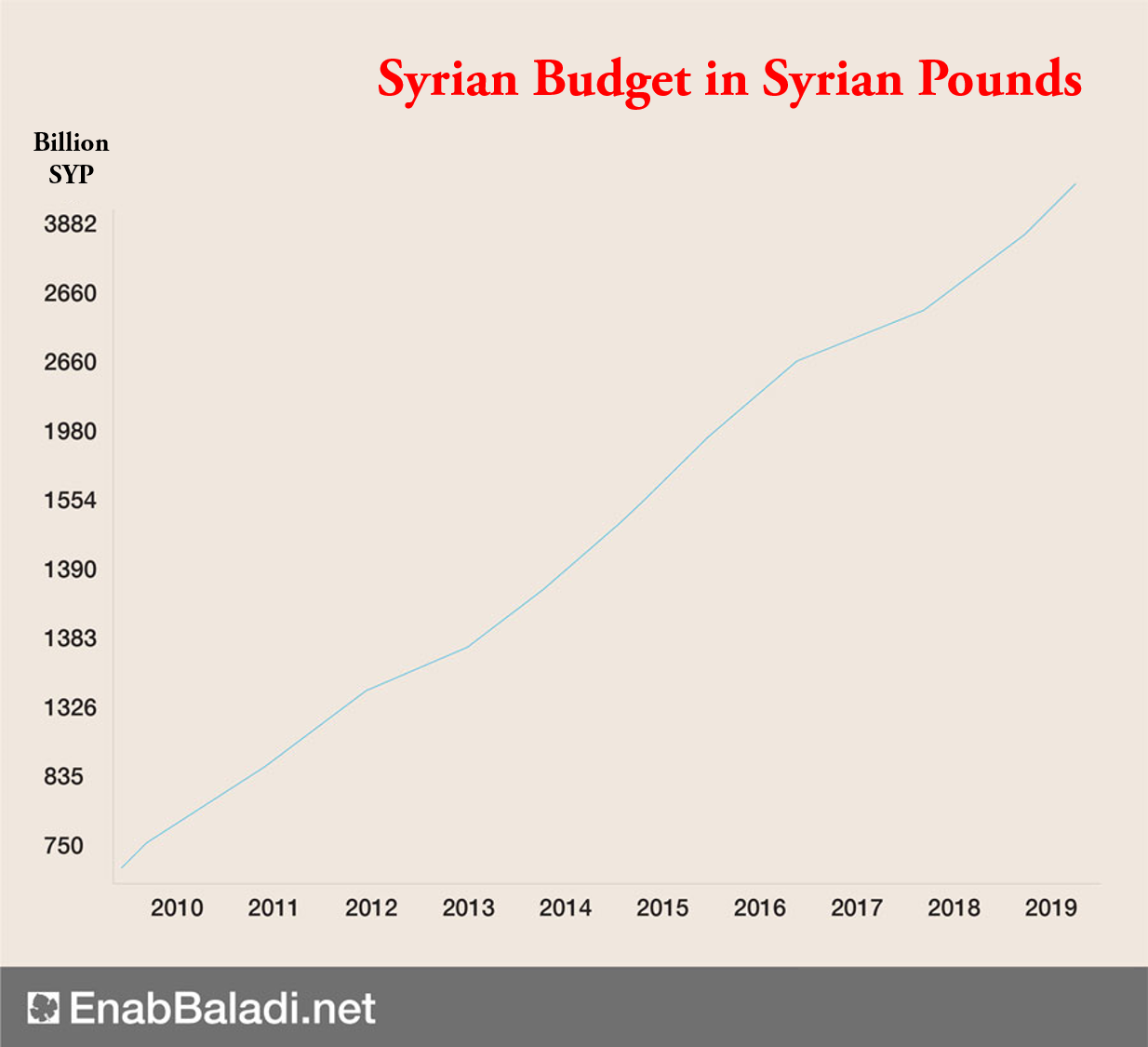 The devouring of the budget by wheat and fuel subsidies has pushed the government to attempt to find solutions, as the Higher Council for Economic and Social Planning met on March 16 and approved the restructuring of administrative spending and the provision of around 100 billion SYP to support the most productive economic institutions, in order to meet the difficulties and challenges in the oil and energy sectors.

However, such savings in expenditure, if true, seem slim, as 100 billion SYP is a very small amount that cannot really support economic institutions, according to al-Qadi, who stressed that any government that has a budget deficit offers treasury bonds in order to borrow from the people, or from abroad, and pays interest on these bonds until their due time.

Treasury bonds are bonds issued by any government whose expenses exceed its revenues, either to local banks, investors or international banks, in order to obtain liquidity and meet the deficit, in return for payment of interest by the government to the investor. These bonds have repayment timelines of 10, 20 or 30 years.

However, the condition for the success of this solution is to deal with a credible government with a promising rate of economic development, which gives confidence to bond buyers. Moreover, the economy should not be susceptible to large rates of inflation, according to al-Qadi, who considered that hyperinflation and the nonexistent, or even negative, economic growth rate in Syria to alienate any local investor or saver who could buy treasury bonds issued by the Syrian regime.

On February 4, the Central Bank of Syria, and for the first time in Syrian history, announced the issuance of certificates of deposit in Syrian pounds with a nominal value of 100 million SYP and an interest rate of 4.5%, to manage local liquidity within the framework of the implementation of its monetary policy. This is due to the instability of the Syrian pound, and the lack of confidence in the government’s performance, amid large rates of inflation.

The budget deficit will have economic ramifications, especially on citizens, from whom the government will resort to the collection of more direct and indirect taxes to cover part of the deficit, according to al-Qadi.

However, after the regime’s government has been persuaded that the amounts collected will not suffice, and that the market does not respond to monetary policies and tools in order to employ and invest the accumulated cash by savers and bond owners in the local market, they will only have to print local currency that is not supported by large quantities of local goods and services, or a sustained economic growth. Such a scenario could lead to continued hyperinflation, and a weak or negative growth rate, which would increase the suffering of the Syrian people.

Al-Qadi indicated that it is impossible for the economy to return to a healthy or steady development without a just political solution to stop the ongoing demographic, social and economic fragmentation.