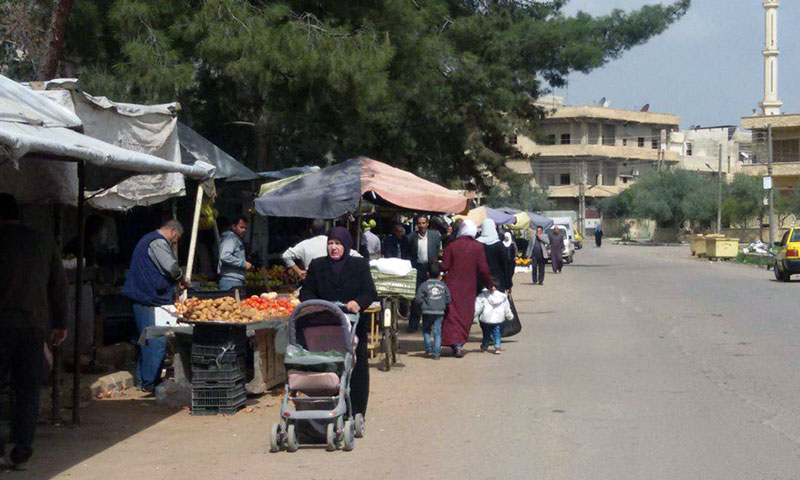 Markets in Southern Syria are undergoing a marked economic drop-off after the donor organizations left the area, following the Syrian regime’s control of it in August 2018.

The state of recession is represented by the closing down of many workshops, shops and startups throughout Daraa governorate, for the international and local organizations used to contribute to providing work opportunities through their developmental projects in the wake of the opposition’s control, in addition to the money they pumped into the markets.

The jobs that the people in Southern Syria used to do vary between relief, healthcare, services and other projects. Alaa, a former employee at the Afaq al-Mustaqbal/Horizons of the Future Organization for capacity building said: “The organization had a staff of 600 employees, workers, managers and guards. It also had contracts with 40 trucks as to transport the food packages from the storages to the villages where the food materials were to be distributed according to the work plan.”

In an interview with Enab Baladi, the young man, in his twenties, said that the organization had a contract with the UN’s World Food Program and that it has created a massive gap in the area, for all the young people who used to work for it are today unemployed.

During the opposition’s control of Southern Syria, Afaq organization covered many of the humanitarian fields’ needs of manpower, in addition to other dozens of organizations, such as “The Syria Essential Services,” “Watad,” “Watan,” “Medical,” “Uossm,” “ARC,” “Doctors without Borders,” and other local humanitarian organizations.

In addition to the organizations mentioned above, several charities, concerned with supporting orphans and poor people, offering psychological support and agricultural organizations also meet many needs in Southern Syria, which energized the market and the labor force at all levels, including warehouses, vehicles, and the lands they rented.

However, these entities and organizations were viewed as pro-opposition, being unlicensed by the Syrian regime which disapproves the work of any entity operating out of its shadow and conditions.

Supplementing the Markets with Liquidity

Besides the hundreds of young people whom these organizations have offered work opportunities, they also presented an abundance of liquidity in the area, supplemented by the exchange process, for the employees used to exchange their dollar monthly salaries into Syrian pounds, buying their needs from the local markets, which back then resulted in a remarkable financial and economic activity.

Ahmad Mahameed, a worker in the city of Daraa, told Enab Baladi that the daily wage of a worker is estimated with 3500 Syrian pounds (the exchange rates swung between 400 and 500 Syrian pounds throughout the opposition’s control period), speaking of movers or car drivers and other of the organizations’ activities in the area, describing the earlier state of affairs as better if compared to the present time.

“I worked in loading and unloading food packages, in addition to storing the amounts coming from Jordan in warehouses. Then, we loaded them onto cars on a daily basis according to the plan that the organization made for the distribution mechanism,” he said.

According to the young man, in his twenties, “the work was exhausting at times, but the wage we received matched the effort, for today we cannot find a job to cover our needs” as he put it.

For two years, Abu Jamal, a man in his sixties from the border town of Tell Shihab, used to rent his warehouse to relief organizations in the town for $200 a month, only to lose this sum of money this year, for his warehouse is empty.

In an interview with Enab Baladi, Abu Jamal said that “the warehouse’s rent used to cover some of the household’s expenditures, but today it is empty, consisting of walls only,” as he put it.

Many of the area’s people are in the same situation due to the gap created by the organizations’ absence, a state that Mohammad al-Refai, a cargo vehicle driver, described to Enab Baladi: “We used to sign contracts with the organizations as to load the food packages, for which we received a 500 Syrian pounds per kilometer; the distance would get longer or shorter according to the plan set up.”

The organizations implemented many service projects, which relied on local workshops, in terms of construction, restoration and employment, as they signed direct contracts, under which they purchased services, obtained price offers and tenders.

These projects were carried out by contractors from Southern Syria, which motivated service workshops such as blacksmith shops, paint, carpentry and building materials traders, in addition to the needed supplies that energized the commercial market in terms of supply and demand.

“The organizations have brought action to the labor market in the region and triggered competitions between contractors [to implement certain projects]such as the renovation of schools in al-Hirak and other areas,” said Yassin al-Qadah, from the city of al-Hirak and a former employee of the Union of Medical Care and Relief Organizations (UOSSM).

The role of the organizations in supplying food and medical packages to the population provided about 80% of the necessary household needs. They were distributed every 45 days on a regular basis, while the aid that the Syrian Red Crescent offers is limited in terms of quantity and materials and is distributed every six months only, according to al-Qadah.