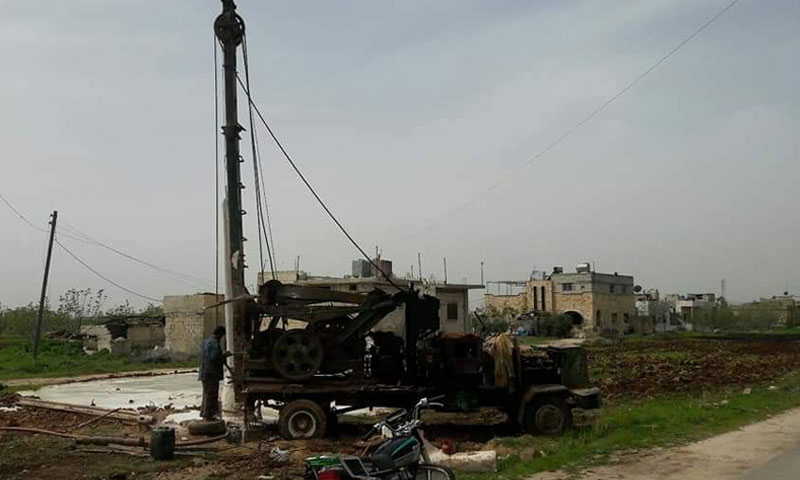 Citizens in the southern countryside of Idlib were working to find alternatives sources to secure potable and daily use water by drilling their own wells.

However, the process of well drilling has become a random phenomenon in the region causing drilling rigs to spread all over South Idlib and pose a threat to underground water resources, especially that the phenomenon has taken a commercial dimension.

The drinking water plants and reservoirs were not safe from the adverse effect of conflicts in Syria. The infrastructure of these installations was destroyed due to indiscriminate shelling; thereby many villages were suffering from water deprivation, for they no longer receive water through main networks.

The wells are spread along the vicinity of the Orontes River area, stretching from al-Ghab plains in east Hama east to the northern Turkish border.

Farid Musa, a well investor from the city of Kafr Nabl, declared that there are seven authorized wells out of 125 providing the city and surrounding villages with water.

During an interview with Enab Baladi, Musa explained that 85 wells were used to sell water, 15 wells in the city of Kafr Nabl were private, and 20 were left for domestic use only.

During an interview with Enab Baladi, the technical engineer Fatih al-Mursal, originally from the city of Kafr Nabl in the southern countryside of Idlib, attributed this phenomenon to the absence of censorship and the fact that the majority of people think  they have the right to do whatever they want with their property and towns ignoring the repercussions the next generation will suffer from.

Random wells may cause groundwater level to decrease, said al-Mursal. He stressed that water resources are threatened, especially that the distance between some wells is no more than 100 meters, leading to the previously mentioned threat.

Al-Mursal added that the organizations which are supposed to be responsible for this are not digging new wells in the area, but are working on “equipping the old wells only.”

Solutions to the issue

The Local Council in the city of Kafr Nabl is working to limit the proliferation of random wells in the area and prevent any future random drilling. The Council took a number of measures, including issuing a decision to prevent random drilling and stop the work of a number of drilling rigs, after monitoring  the large number of drilling operations and the transformation of some wells into sewage channels due to the lack of drainage lines, according to the head of the service office at the Local Council in Kafr Nabl in south Idlib, Mohammed Hanak.

Hanak told Enab Baladi that the Council prevented the drilling of wells and took additional steps to curb this phenomenon, including cutting the price of the water tank to half, from 800 to only 400 Syrian pounds, from different sellers whether private or public wells.

According to the head of the services office, this measure was “a success” and maintained the price of the tank. However, the increasing price of fuel and the continuous shelling on the buffer zone in south Idlib, contributed to the increase of the price of water tanks, which rose to 1,200 Syrian pounds. As a result, the wells owners started to monopolize the process of water selling.