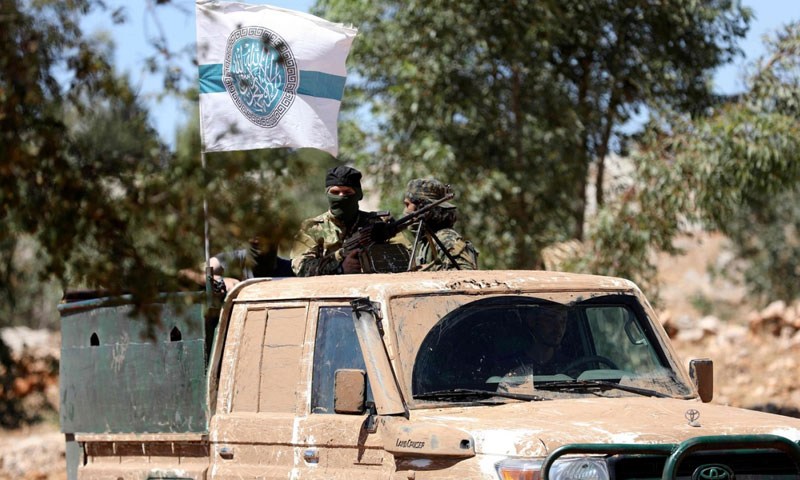 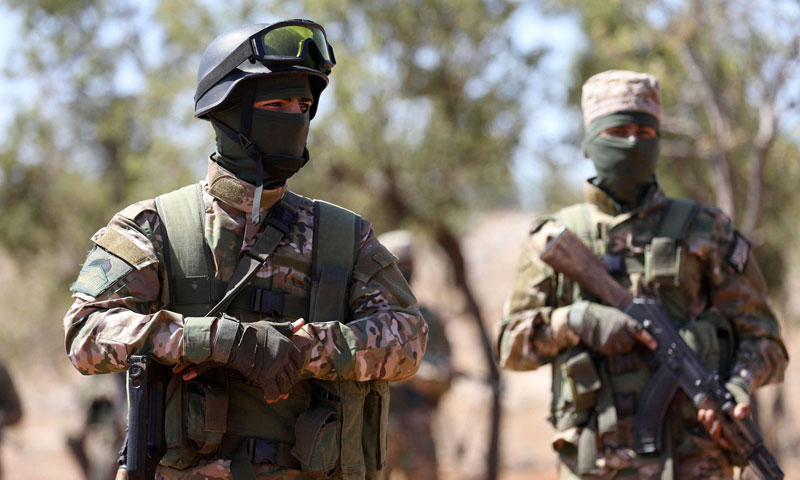 In three days, the “Hay’at Tahrir al-Sham” managed to eliminate the influence of the “Nour al-Din al-Zenki Movement” in western rural Aleppo, which, thus, joined a trail of factions terminated throughout the past years by “al-Nusra Front,” functioning under “Tahrir al-Sham.”

“Hazzm” (Determination Movement), “Jaish al-Mujahideen” (al-Mujahideen Army), “Fastaqim” (straighten up Union), the “Syrian Revolutionaries Front” and “Division30” are all among the defeated factions.

The “Tahrir al-Sham’s” rapid takeover of all western rural Aleppo was not an uncalculated process; on the contrary, it was a strategy, set up and planned in advance, for the reinforcements it brought in the area and participated in the incursion showed that “Tahrir al-Sham,” since day one, intended to fully eliminate “al-Zenki,” unlike the pervious confrontations, which ended with agreements of “concord and compromise.”

What backed “Tahrir al-Sham’s” strategy in its deepening progress within western rural Aleppo was the Turkish government giving a blind eye to the on-ground operations, though the Turkey-backed factions of the “National Front” entered the confrontations against “Tahrir al-Sham,” including the “al-Sham Legion” which appeared as a key side to the confrontation, while expressing no seriousness in its fight against the “Tahrir al-Sham.”

Military sources informed Enab Baladi that the “Legion’s” posts and strongholds were not stormed by “Tahrir al-Sham,” for the first has chosen a strategy of neutrality, a step that resembles what it has done in the previous years and which opposes to the intention the “legion” advanced through media.

With “Tahrir al-Sham’s” increasing rule over western rural Aleppo and the state of anticipation in Idlib, many questions are raised about the developments to take place in the area in the upcoming days; would the confrontations between the “National Front” and “Tahrir al-Sham” be resumed or are they to stop when the latter realizes its objectives?

The Loser, the Winner?

A simple reading of the on-ground reality shows that the control map of “Tahrir al-Sham” in Idlib and western rural Aleppo has expanded to cover all the western countryside.

The major point to contemplate is the strategic importance of the area, for the Sheikh Barakat mountain, currently under the control of the “Tahrir al-Sham” overlooks all the rural parts of Aleppo, western and north-astern, revealing the city of Afrin and the two towns of Nubl and al-Zahraa, which the Syrian regime controls, in addition to the area from which “al-Zenki” retreated, which is the link between the area of the “Olive Branch” operation, Afrin, and Idlib, not to mention the area’s importance to the Syrian regime.

It could be said that the “Tahrir al-Sham” has ripped away the major joints of the “liberated north,” in a proactive step to the implementation of the “Sochi” deal’s terms, providing for the establishment of a demilitarized zone between the areas held by the Syrian regime and those of the opposition, which cover the western rural parts, in addition to the reopening of the two international highways, Damascus-Aleppo and Aleppo-Latakia.

With no doubt, “al-Zenki” is the loser here, unlike the factions of the “National Front” which are yet in control of their posts in Idlib, both in the south-eastern countryside, located within the circle of the confrontations, and the western countryside in the Shashabo Mountain area.

In the past a few days, the “al-Zenki Movement” did not offer any concessions in relation to the “Astana” talks and the project providing for Assad’s forces and Russia’s progress to western rural Aleppo as to mitigate the “bickering” between the talks’ guarantor states, Russia, Turkey and Iran, a commander of the “Free Army” told Enab Baladi on the condition of anonymity.

He added: “The al-Nusra’s attack of the al-Zenki has a single strategic goal; weakening it and terminating the equivalent to half of its force, so it would not be present at the futuristic negotiation table.”

Al-Nusra’s attack has two goals, he believes: The first is the elimination of the “al-Zenki” and weakening “Tahrir al-Sham”, and the second is keeping two major bodies in power in Northern Syria, “Tahrir al-Sham” and the “National Front.”

The “National Front” is headed by the “al-Sham Legion,” known for being close to Turkey and for the massive secrecy engulfing the progress of its operations in Northern Syria.

The source explained that the “Legion” is the biggest winner of the confrontations witnessed by the area previously, for they costed it no loss of troops or weaponry while it kept a balanced relationship with the rest of the military factions.

The “Sham Legion’s” major benefit is manifested in its being the strongest block of the moderate opposition factions after the ultimate elimination of the “al-Zenki.” According to this, it is the “Legion” that will make the decisions for Idlib and the shape of the relationship with “Tahrir al-Sham” in the future.

In the first day of the confrontations, the “National Front’s” accent was of a highkey against “Tahrir al-Sham.”

In its first statement, it announced a state of complete readiness of its forces against “Tahrir al-Sham,” baking it with a second, in which it called its troops to commit to the confrontation posts with Assad’s forces.

The third statement had a rather light tone, showing a confusion within the “National Front” in terms of supporting the “al-Zenki,” one of the “Front’s” major components.

The foundation of “Tahrir al-Sham” was announced in March 2014, with the unification of 19 different legions and divisions, spreading in Aleppo, Homs, Hama, Idlib and rural Damascus.

The “Legion” is known as the military wing of the “Muslim Brotherhood” and is an alternative to the “Civilians Protection Commission,” founded in the beginning of the Syrian revolution of various groups, several of whom were members of the “Brotherhood” and the “Shields of the Revolution Council.”

The “al-Sham Legion” is also known for being discreet about is military command, on top of whom is the General Commander Fadluallh al-Haji, who Turkey massively supports, and commander Khaldoun Medawear, from Homs, who has been lately assigned a commander of the northern rural Aleppo sector.

According to Enab Baladi’s information, the sectors of the “Legion” are led by officers who have defected from the Syrian regime, the majority of whom are from Homs governorate. The “Legion” has conducted many alliances in the opposition-held areas, including those with the “Fatah Halab” (Aleppo Conquest Operations Room), “Jayish al-Fatah” (Army of Conquest), “Northern Rural Homs” operation room and “Hawar Kilis” operations room.

In the past years, the “Legion” followed a policy of neutrality, distancing itself from the intra-fighting in Idlib governorate and the rest of the areas controlled by the opposition. The “Legion’s” attitude was the same in relation to “Tahrir al-Sham” and other factions.

In the last confrontations witnessed by Idlib, 2017, the “Legion” defined its position of the fighting with neutrality after the two sides to the conflict, the “Syrian Liberation Front” and “Hay’at Tahrir al-Sham” called on it as to participate.

In a statement, published on its official platforms back then, the “Legion” said that it does not approve the “iniquity, suppression and transgression under the Syrian Revolution,” for combating Assad’s forces and their allied militias is more necessary than participating in the “confrontations,” and called all the sides to rely on reason and take a step back to “righteousness” away from being dragged into “falsehood” pointing out to its responsibility for the protection of civilians who have been made into targets.

The state of “neutrality” which the “Legion” committed itself to triggered a sense of harmony with “Tahrir al-Sham,” especially that it was called on to fight along the factions of the “Free Army” to combat “Tahrir al-Sham.”

Going back to the gains that the “Legion” will be achieving through the confrontations in western rural Aleppo, the former source indicated that Turkey wants to regulate Idlib’s situation with a single power, instead of the “factional” state it is currently living.

“It is not unlikely that the upcoming days are to witness joint movements by the factions, in a step to set up a single military and civic administration. However, this will happen after changing the ideological status of Tahrir al-Sham and the extremist sides that are running its affairs,” He said.

Under the latest developments of the on-ground situation in Idlib, “Tahrir al-Sham” resized control of the town of Tell Mannas, rural Maarrat al-Nu’man, a day after the “National Front” advanced to it. But the return was not achieved through fighting but according to an understanding between  “Tahrir al-Sham” and the “al-Sham Legion,” and was followed by the areas of Maar Shurin, al-Ghadfeh, Jarjanza and Maasaran.

The remarkable thing that followed “Tahrir al-Sham’s” complete control of western rural Aleppo is the decrease of the confrontations in Idlib governorate, except for sporadic clashes in the border area of Atmeh.

Fatih Hasson, head of the military delegation to the “Astana” talks, provided Enab Baladi with a follow-up at the field level of the the situation in Idlib, published by the “Military Liaison and Studies Office” of the “Free Army.”

The follow-up mentioned that the “National Front” is in front of two options today, following the complete departure of the “al-Zenki” from its control areas in western rural Aleppo. The first option is deterring “Tahrir al-Sham” and seizing the major joints it is controlling and ruling over the entire “liberated” areas in Idlib and its countryside; otherwise, it will be losing its role in running northern Syria. The second option is that “Tahrir al-Sham” present itself as the body with the ability at administrating Northern Syria with conducting essential changes to its military, ideological and political structure compatible with the actors’ attitude towards the Syrian affair.

According to the filed follow-up, the “Tahrir al-sham” wants to control all the joints of the liberated areas in Idlib and get rid of any faction that poses a danger to it “under the cover of false pretenses and baseless excuses,” in a step to position the Turkish side before the choice where “ it is the only military formation capable of running the liberated area in Idlib and its surrounding and the one in control of its joints.”

Awaiting the Reopening of the International Highways

Now that “Tahrir al-Sham” has controlled all the western countryside and the gate to Afrin area, it is running wide spaces of the two international highways of Damascus-Aleppo and Aleppo-Latakia, which are supposed to be reopened under the “Sochi” deal, signed in September 2018.

In a press conference, last September, the Turkish Minister of Foreign Affairs Mevlüt Çavuşoğlu said that provided by the “Sochi” summit’s deal, the borders of the Syrian governorate of Idlib will be preserved.

Çavuşoğlu also defined the period during which the two international highways “M4” and “M5,” passing through Idlib, are to be reopened late in 2018, as to reactivate trade in the area. The highways are Damascus-Aleppo and Latakia-Aleppo.

The deal’s terms cannot be viewed as separate from the action undertaken by the “Salvation Government” after its new ministerial formation, announced last December, for it seeks to coordinate the operation of the crossings in Idlib governorate and is making action to coordinate with Turkey as to receive service-based benefits in the area.