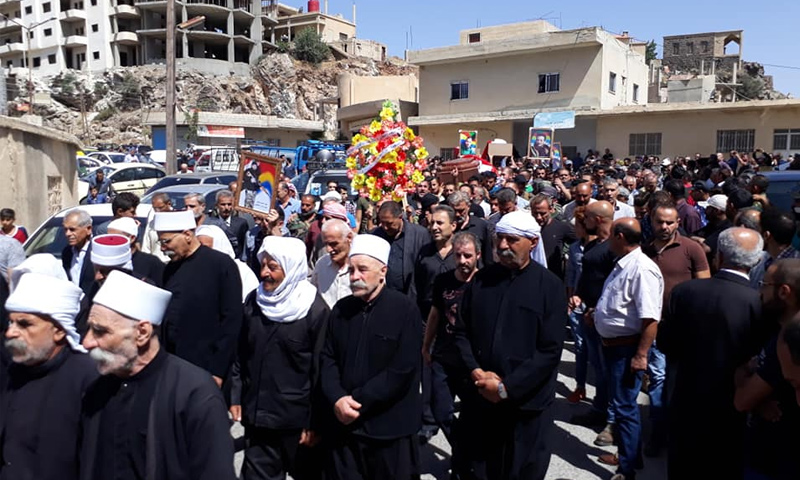 The funeral of the victims of ISIS attack on As-Suwayda in Shahba city- 26 July, 2018 (Facebook)

Financial support from the Druze Unitarian Community in Lebanon has not ceased reaching As-Suwayda province since the ISIS attack on the region on July 25, 2018, during which the terrorist organization has launched a sudden armed aggression on several neighborhoods and villages in As- Suwayda, leaving hundreds of civilian victims, in addition to casualties from the local armed formations.

A religious delegation visited As-Suwayda, commissioned by Sheikh of the Druze Unitarian Community, Sheikh Naim Hassan, to provide approximately $175,000 (equivalent to 86 million Syrian pounds) in support of the wounded and victims of the attack, in which approximately 300 people were killed in villages of the eastern countryside of the province.

According to the Facebook page of the Druze religious centre’s media office, this amount of money sent from the Lebanese Druze was handed directly to Sheikh Hikmet al-Haj, who soon formed a committee of six persons authorized to distribute the money on the victims, according to their knowledge and under their supervision, by an official decision issued by the cult religious centre on 13 January.

These sheiks were granted the authorization to cash and distribute donations, as well as hand gifts and donations, using regularized registers and numbered receipts to control cash inputs and outputs appropriately.

The committee also holds meetings, as it deems appropriate, to study the distribution of these donations. Accordingly, the money is be disbursed using signed receipts, to be presented to the spiritual leader of the community and deposited in the office of the spiritual leadership.

The committee is authorized to certify the financial experts to revise financial, technical and even architectural aspects when necessary. The Druze spiritual leadership is considered as a reference to the committee. Yet, the tasks and mandate of this committee shall be terminated immediately upon the distribution of the amount of donations received from Lebanon.

A volunteering activist, who preferred not to be named, told Enab Baladi that the money is to be distributed equally to the victims’ families, giving $400 for each dead person and $200 for each injured, activist Moeen (who refused to be identified for security reasons) told Enab Baladi.

Moeen believes that the distribution is “unfair”. There are families with three victims who are not breadwinners that receive $ 1,200 under the plan, while other families that have lost one person who is their sole breadwinner receive only $ 400.

He pointed out that the distribution is often done in the Druze Islamic Sect House and in the form of exaggerated showing off, which leads some families to refrain from going in the interest of dignity despite the need for financial support, as he put it.

A difficult task: Does it raise the shares of al-Hajri?

One of the activists involved in civil initiatives to support the eastern villages financially and psychologically, told Enab Baladi that the religious centre had been previously negligent in providing assistance, especially Sheikh Hikmat al-Hajri, who has been an obstacle to all civil attempts to pressure the case of the abducted, raise funds, and search for official lists of the victims and injured which assist them in their initiatives.

The activist, who asked not to be named, said that after the incident, al-Hajri issued several invitations to young people to join the military service, despite his great knowledge of the reluctance of the regime forces to participate in the battle, which caused the province to lose more than 300 dead and injured.

According to him, all this made people lose confidence in the spiritual Sheikhs in general and Sheikh al-Hajri in particular. He added that in spite of his gratitude for any donation that serves even one oppressed person in the province, he doubts the purpose of choosing the unpopular Sheikh among the three sheiks who represent the spiritual leadership in As-Suwayda province.

Some of the people of As-Suwayda consider sheikh al-Hajri to be the man of the regime and Iran. Therefore, he lacks popularity, as one of the spiritual sheikhs in the province, along with Sheikh Hammoud al-Hanawi and Sheikh Yusuf Jarbou.

As for the activist Moeen, he thinks that the Lebanese sheikhs considered al-Hajri as an “easy-to control pawn,” saying that donors will not find better than al-Hajri to carry out their orders. Al-Hanawi and Jarbou are more independent, popular, and have autonomous decisions. He pointed out that the delegation visited both Sheikhs but in the end deposited the amount with the sheikh al-Hajri.