“Al-Julani” Calls for a Unified Military Council in Idlib 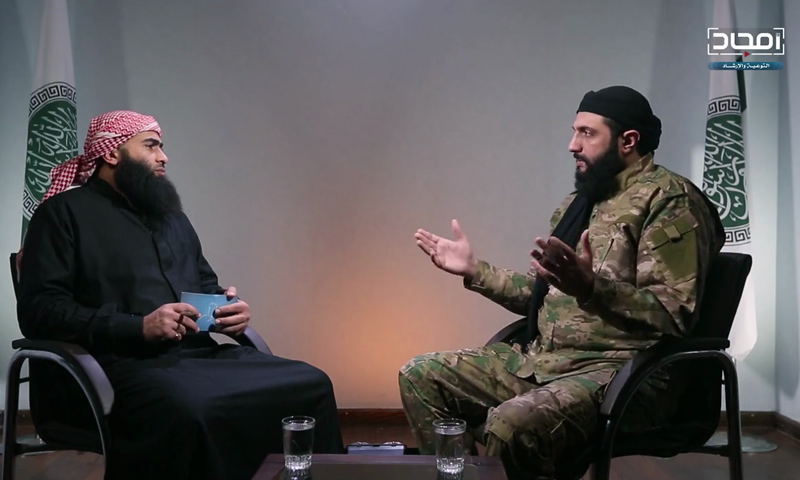 The Commander-in-Chief of “Tahrir al-Sham,” Abu Mohammad al-Julani, called for the foundation of a unified military body in Idlib governorate, one to join all the factions and military formations.

“In the meantime, the key step to seek is that the factions’ mission be military only, away from the management of the city,” al-Julani said, appearing on the Awareness and Guidance program, posted by Amjad Media agency today, Monday (January 14).

He added: “We should assembly under a military council or military entity, through which we can defend the liberated [areas].”

In the past days, “Tahrir al-Sham” launched a military operation, via which it managed to seize most of the areas in Idlib governorate and western rural Aleppo.

The operation forced “Harakat Ahrar al-Sham al-Islamiyya” to dissolve itself and drove the “Nour al-Din al-Zenki Movement” out of its areas in Afrin.

“Al-Julani’s” interview corresponds to the talks addressing Idlib governorate’s fate in the upcoming days and the arrival of Turkish military reinforcements in Hatay province, adjacent to Idlib in the north.

In the interview which Enab Baladi monitored, al-Julani said: “The residents of the liberated areas will be able to observe that if the factions are to be distanced from the civic administration, they will play a major role in the upcoming days.”

“We are seeking to involve everyone in the administration, which is to be run by high-level academicians, from various fields including medicine and others,” he said.

The remarkable thing about the confrontations, launched by “Tahrir al-Sham” against the factions, is the “Salvation government’s,” accused of affiliation to “Tahrir al-Sham,” immediate entrance to the recently controlled areas.