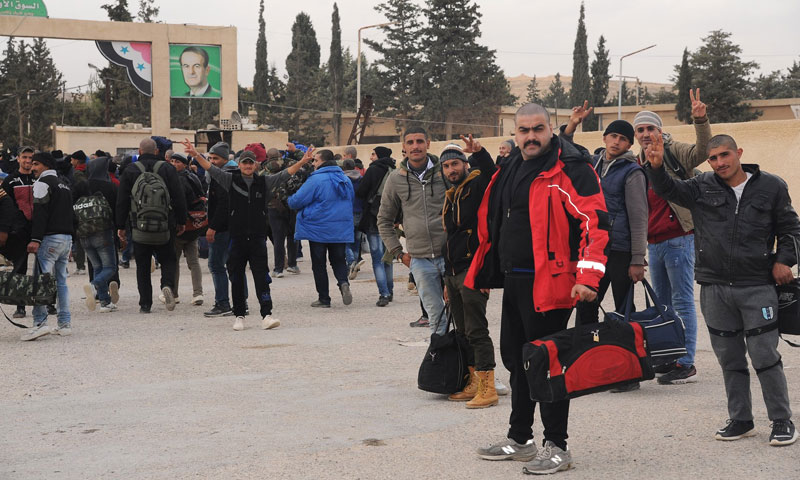 “There is no other religion but Ba’ath and no other god but al-Assad,” is the slogan with which the new army conscripts are welcomed by the guards of the al-Nabak Assembly Center, rural Damascus, considered a key recruitment center.

Expressions honoring al-Assad and his forces, in addition to financial exploitation by officers and troops are things that fresh conscripts are exposed to, said one of these conscripts, refusing to reveal his name for security reasons, following the end of the legalization of status, settlement,  notice, imposed by the Syrian regime on the young men in rural Homs after it controlled the area last May.

The Syrian regime’s affiliate media outlets have tackled the enlistment of hundreds of young men last month, as quoted by the Syrian Arab News Agency (SANA) on November 30, which praised the young men’s action, saying that they have came from all governorates ‘’brought together by the love of homeland.”

The agency also referred to the “young men’s massive sense of comfort” triggered by the good reception, treatment and the provision of all their needs for the short period they will be spending at the center, located 80 kilometers in northern Damascus. However, some of the conscripts told Enab Baladi the total opposite.

Though the center’s policy is not new, it is imposing a huge pressure on the young men, particularly those coming from the settlement areas, that were under the control of the opposition, who have been a part of either peaceful or military action.

The conscripts’ suffering starts with being received by expressions such as “there is no other religion but Ba’ath and no other god but al-Assad,” before their possessions are inspected and other belongings, including cellphones, “lighters” and shaving razors, are confiscated, where the exploitation process begins.

The guards ask for a 500 Syrian pounds for allowing the conscripts contact their families for a single minute. They also force the young men shave their beards every day, making them buy razors from one of the center’s kiosks for doubled prices, in addition to paying another 500 Syrian pounds to get a single “blanket” to deter clod, knowing that temperature goes below zero at night, especially since the stay at the center might take weeks before the recruits are sent to the posts where they will be accomplishing the service, one of the conscripts told Enab Baladi.

There are four kiosks in the center, the conscript added, run by officials and troops, exploiting the conscripts in a systematic way through selling them bad cigarettes for high prices, in addition to selling them canned food four doubles their original price.

The young men are forced to buy canned food due to the poor food they are offered at the center, as the center’s officers are stealing the food shares designated for the conscripts.

This corresponds to the issuance of new reserve military service lists by the Assad’s forces and the return of the security demand of the reservists whose names were delisted following the pardon degree, issued by Bashar al-Assad, head of the Syrian regime, in October, which provided for pardoning army defectors and compulsory and reserve military service evaders.

Under the pardon, many young men were exempted from the draft, which caused a positive reaction. Nonetheless, new lists were issued in the last tow weeks, with about 300 thousand new names, as crossed sources, including employees at the recruitment departments, told Enab Baladi.

In addition to all that mentioned above, the young men are coerced to attend to the speech of the center’s commander brigadier general Suhail Ali al-Mustafa, which includes cheering for Bashar al-Assad, head of the Syrian regime, glorification and a highlight of the legendary power of the Assad’s forces and their ability at undertaking battles against Israel, as well as the possibility of getting Golan back in a single day.

The commander’s speech, whose left hand was injured during the battle of breaking Aleppo’s siege, late in 2016, did not forget to praise Iran and Russia, the regime’s allies, in addition to expressing his anger at the young men who migrated, describing them as traitors and lacking patriotism. At the same time, the present young men are ordered to invite their friends to join the army’s ranks.

Saudi Arabi also had its share of the commander’s speech, for he spoke of its “criminality” when it comes to the Jamal Khashoggi’s affair, who disappeared t the Saudi consulate in Turkey, while accusations of murder were directed at Saudi officials, ignoring the United Nations’ report, in which it accused the Syrian regime of murdering opposition figures in its prisons and torturing them with all available means.

Under absent official statics, a census issued by the Syrian Observatory for Human Rights last March estimates that the Assad’s forces have lost 63 thousand and 820 troops due to the ongoing battles.