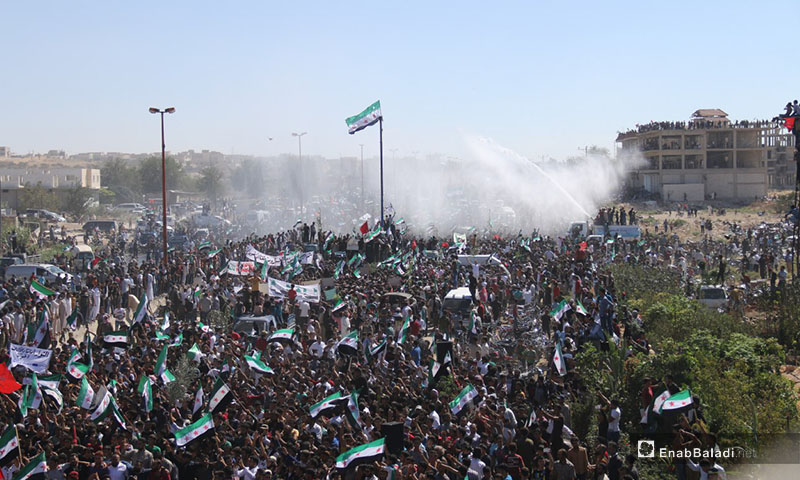 Demonstrations calling for the goals of the revolution, rural Idlib – September 14, 2018 (Enab Baladi) 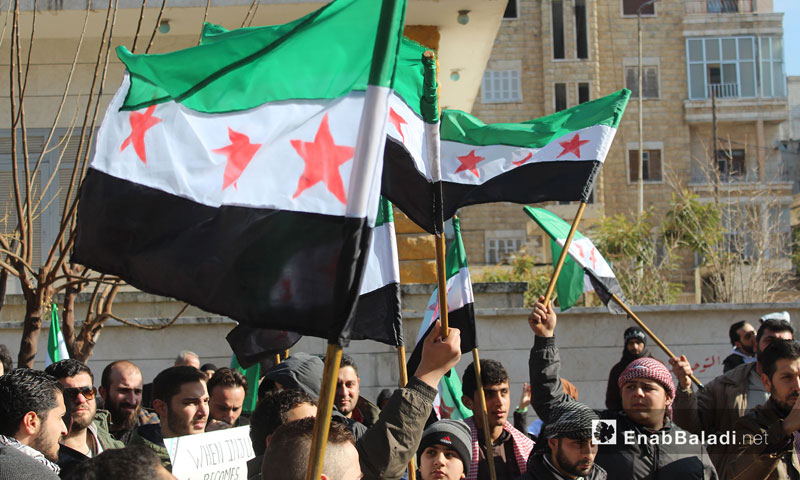 A state of security chaos is storming Idlib governorate, Northern Syria, where several kidnappings and assassinations targeted many of the Syrian revolution’s peace advocates, known as icons, which doubled the fears of media and humanitarian fields’ activists, forcing them to take precautionary measures to protect themselves.

A week barely passes without a case of kidnapping in Idlib and its rural parts, which aim at activists, by anonymous persons wearing “letham” (face cover).

Similarly, assassination incidents of key activists are recurrent, the last of which took place on November 23, where Raid Fares and Hamoud Junaid were shut to death by anonymous persons driving a “van” at Kafr Nabl city center, rural Idlib.

In answer to the many questions that seek to reason why the kidnappings and assassinations focus mostly on activists, Obida Abu al-Baraa, an activists, said that the action of those functioning in the media sector in Idlib “is not limited to documenting the peaceful movement and the regime’s crimes against the Syrian people; they actually have an influence on the public opinion, guiding society and uncovering the hidden affairs.”

Targeting the activists aims to silence the revolution’s voice, said “Abu al-Baraa,” pointing out that they have been fought since the beginning of the revolution by the Syrian regime, and, today, they are being attacked by the opposition factions, in control of Northern Syria.

Qusai al-Khatib, activist functioning in the humanitarian filed, attributed targeting the activists to the fact that “they contributed to aborting the project of extremist factions, such as the Islamic State,” believing that activists have an important and essential role in Syria, backed by the effect they have on society and the public opinion in the area.

The “Response Coordination” group, Northern Syria, has warned that the humanitarian organizations might cease to work in Idlib governorate because of the kidnappings that are targeting the relief field’s employees.

In a statement published on November 21, the group said that several entities in Northern Syria are yet imposing pressure on the workers of the relief and humanitarian fields, the last of whom was Abdul Razaq Awad, an official from “Violet” organization, who was arrested by the “Salvation Government” to be released later.

The latest kidnappings and assassinations had a negative impact on Idlib’s activists, according to Obida, who was forced to cancel many of his tours in the area due to the security deterioration, holding the Syrian regime accountable, for Idlib and its countryside are the only areas left out its control, and it is to its interest to spread terror there.

Khalid Idlibi, media activist, believes that the security chaos did not only affect activists, but it also influenced many segments of Northern Syria’s society, “activists, merchants and faction troops.”

“It is hard to leave your home without knowing if you are to return or not,” he described the situation.

As for the entity behind the assassinations, Idlbi explained that there is a missing link as to whom is responsible for these incidents, pointing out that there are many views. Some militants and factions’ spokespersons say that they are “Islamic State” affiliate cells; others accuse thieves and bandits, while the cases are registered as against persons unknown.

The current state urged many activists to take security measures, which do not fully protect them but relatively; keeping a secret of appointments and avoiding periodic arrangements, less wandering in public space and refrain from appearing a lot, according to Khatib, who said: “As activists, we have suspend our work in various areas, according to each of the activists’ sense of the safety level in the area, which is, for sure, a relative indicator.”

Obida mentioned lessening the activists’ presence in public spaces, refrain from going to far areas at night, and if the activists happen to be out of his house at night, he has to sleep where he is, in addition to avoiding the places where assassinations proliferate.