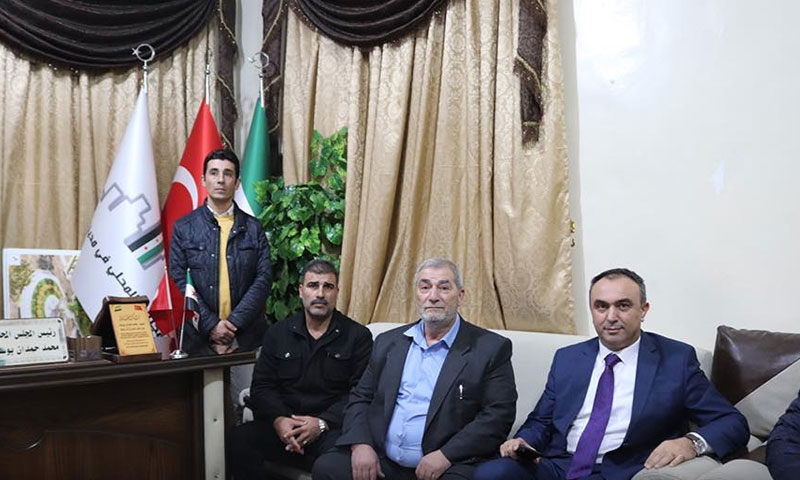 A visit by a Turkish delegation, headed by the governor of Kilis province, to the Azaz Local Council – November 21, 2018 (The Local Council’s page on Facebook)

In the past a few weeks, the Turkish interest in the economic and service related fields in northern rural Aleppo has increased, manifested in the visits of economic and political delegations to the area.

Turkey is attempting to enhance its economic presence in the area before the start of the reconstruction phase in Syria, especially with the increasing Russian calls to participation in the process following the end of the military operations between the Assad’s forces and the opposition factions.

The Turkish attempt is undertaken through the design of the economic structure it produced in the area after it controlled it through the military operation titled the “Euphrates Shield,” which ended in March 2017 and during which it supported the factions of the “Free Army” to recapture the area from the grip of the “Islamic State” (ISIS).

Last week witnessed visits by several political and economic delegations to the northern countryside of Aleppo, for a delegation of the Turkish presidency has on Saturday, November 17, visited the city of Azaz. Accompanying the members of the city’s local council, the delegation had a tour to the Council’s establishments. Another delegation, headed by the governor of the Kilis province, has also visited the Azaz City Local Council.

On November 15, a high-level delegation from Ankara province has visited the city of al-Bab, where the service challenges and obstacles that are facing the city have been discussed, and the services provided by the local council were reviewed.

Another delegation, consisting of the mayor of Gaziantep and his deputy, has also visited the city on November 13. The mayor learned about the office’s activities and projects, according to what the al-Bab City Local Council has mentioned on its “Facebook” page.

As for the reasons behind the visit, Mohammad Yousef Keno, Director of the Azaz City Local Council, told Enab Baladi that the visits came as to learn about the situation of the area at all levels, security, service and trade related, and the methods to develop these sectors.

For his part, Ibrahim Durbaleh, the director of the Trade Office of the Azaz and its Countryside Local Council, explained that the Turkish presidency delegation has visited the governmental institutes of the local councils and listened to the area’s people’s demands, promising to cover all that is lacking.

For the First Time, a Delegation of MÜSİAD Expo Businessmen

These visits have corresponded to another by a delegation of Turkish businessmen to the city of Azaz on November 11, which aims at supporting the area’s merchants and economy.

Durbaleh stressed that the Turkish businessmen delegation is from the Turkish “MÜSİAD” Association’s office, which opened an office in the city as to activate trade, economy and industry in the area, in addition to establishing a free zone for the export of the area’s surplus commodities.

Following this, the “Syria MÜSİAD” office participated in the 17th version of the “MÜSİAD” Association’s International Exhibition, held in Istanbul from 21 to 24 November. The participation was an answer to the invitation of the Turkish presidential office, as to exhibit the agricultural and industrial commodities which the areas of rural Aleppo produce.

This is the first time that businessmen from rural Aleppo participate in the international conference, which the organization, consisting of a massive group of Turkish businessmen and industrialist, holds since its formation in the city of Istanbul in 1990.

It focuses on large investment and economic projects and contributes with 18% in the Turkish gross national income. The Association also plays a role in developing the Turkish economy through hosting trade bodies from outside Turkey.