Russia has its Eyes on Syrian Labor Force Abroad 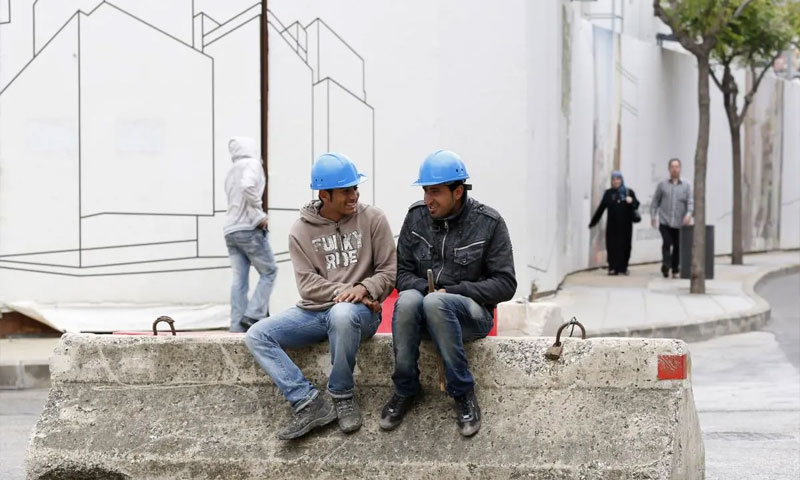 For the duration of the war, the Syrian market has been suffering the scarcity of labor force and productive young people, as a result of migration in search of safe shelters, which negatively affected the Syrian economy and production process.

In the past a few months, the Syrian regime and its Russian ally have been launching calls to bring refugees back home through a Russian plan, based on cooperation with the neighboring countries, which host the largest percentage of Syrian people, Lebanon, Turkey and Jordan, offering these countries guarantees that returning refugees would not suffer any form of harassment, which is Moscow’s attempt at  bringing labor force, particularly young people, back to Syria, for Russia is dependent on this class for the reconstruction it is trying to start because it is difficult to get foreign labor force, according to what the Deputy Executive Director of the Syrian Economic Forum Rami Sharaq has told Enab Baladi.

During the war, Syria has been emptied of its skillful labor force due to the military operations and the young people’s evasion of draft and escape from security-related detentions. In addition to this, the deteriorating economic conditions and the always rising prices triggered the workers to migrate, seeking a better economic reality in the markets of the neighboring countries.

At a time, where stable statistics about the number of laborers who left Syria do not exist, the Head of the Workers Union Jamal al-Qaderi said that the Syrian market is suffering an acute shortage of workers due to the labor force drain under the pressure of war and the living difficulties.

In an interview with the Russian news agency “Sputnik,” last April, al-Qaderi added: “Companies and foundations are lacking labor force,” explaining that the number of the Union’s members used to be a million and 200 thousand persons, while it is 950 thousand today.

The government newspaper of “al-Thawra” quoted the Head of the Economic Office of the General Union of Workers Omar Houriyeh, in September 2016, as saying that the migrant labor force is more than two million workers, the majority of whom are specialists, technicians, craftsmen and employers.

The number of laborers at the private and public sectors has also decreased because of the destruction of many of the two sectors’ facilities, according to what Haiyder Hassan, Head of the Labor Department of the General Federation of Trade Unions, has told the local “Damas Post” in March 2017.

Hassan pointed out that the number of workers at the Cotton Foundation of the Ministry of Industry has decreased from six thousand to 600 workers only. Similarly, the number of workers at the textile industry in Aleppo has decreased from 561 to 194 workers and from 469 at the al-Shahbaa for Textile to 158 workers. In the modern industries sector in Damascus, the number went down from 397 to 81 workers only.

The migration of the labor force had a negative impact on the national economy, for it weakened the production process. It also contributed in the none return of industrialists to their areas and factories after the battles tuned down, according to Rami Sharaq, the Deputy Executive Director of the Syrian Economic Forum, who confirmed to Enab Baladi that the industrialists who came back to the industrial areas are complaining about the shortage of skilled labor force, especially youthful one, which does not exist in Syria.

This motivated the majority of the factories that used to function for three shifts, around the clock, to work for specific hours, for there are not enough workers and infrastructure, in addition to raw materials, such as electricity and fuel, and transportation which are absent.

According to a report issued by the Labor Market Observatory of the Social Affairs and Labor Ministry, which “al-Thawra” newspaper published last July, the present scientific and professional capabilities do not meet the market’s needs and the people’s demands, which strongly indicates the gap in the labor force’s expertise and capabilities.

The shortage of labor force has also contributed in the participation of young people between 18 and 31 years old in the market, compared to the massive participation of the people between 32 and 49 years old, in addition to the emergence of the women workers, who today are triple the number of the male workers at the public sector’s foundations, according to the report.

Nonetheless, the migration of the Syrian labor force had a positive impact on the neighboring countries as a result of the economic role it played there; the number of Syrian workers at the Jordanian market is 600 thousand people, working in service, agriculture and reconstruction, according to what the Head of the General Federation of Trade Unions in Jordan, Mazen al-Ma’ayta, has told “Anadolu” agency in September 2017.

As for Turkey, the Syrian investments form 14% of the foreign investments and the annual Syrian contribution in the Turkish economy has reached a billion and a million Turkish liras, the equivalent to a million dollar, as mentioned by the Turkish newspaper “Yeni Şafak” in September 2017.

Under the absence of official statistics about Syrian workers in Turkey, the registered number in the insurance guide is between 1.2 and 1.3 million workers, according to the figures published by the official site in December 2017.

In Lebanon, despite the “racists” calls for deporting refugees and workers who imposed a pressure on the local labor force, the Lebanese Minister of State for Displaced Affairs Mouein Merehbi estimated Lebanon’s need for the Syrian workers with an annual of 300 thousand.

The Return of Syrian Workers, a Russian Goal

While talks are addressing the reconstruction phase in Syria, Russia seeks to bring Syrian refugees and workers back to Syria, through a number of procedures, including coordination with the neighboring countries. The Syrian regime also, through his officials, is repeatedly calling on Syrians abroad to return.

The last of these procedures was the Syrian President’s, Bashar al-Assad, issuance of a decree, in which mandatory and reserve military service escapees are pardoned, on October 9, and the cancellation of former calls for joining the reserve army lines.

Russia, for its part, related the application of the pardon to the return of the refugees, for the Russian Minister of Foreign Affairs Sergey Lavrov said: “The decree is a step towards national reconciliation and finding convenient conditions for the refugees who would like to return to Syria in addition to the internally displaced people.”

Fahd Basha, a Syrian economic analyst, said that the regime is trying to polish its image, helped by Russia, but it is difficult for it to succeed, due to the young people’s lack of trust in the pardons it is issuing.

About the same issue, a number of young men based in Turkey, whom Enab Baladi interview, expressed fear of the return to Syria under the current situation, concerned that the cancellation of the reserve calls is only a trap set by the Syrian regime.

In an interview with Enab Baladi, Hussam Helmi, professor of economics, stressed that the increasing demand on the Syrian labor force will lead to an increase in the wages offered to workers, this will encourage Syrian workers in Lebanon and neighboring countries to return to Syria for work, especially under the difficult living conditions and the very low wages given to Syrian workers in Lebanon.

The shortage of labor force in Syria, in addition to the need to provide sponsors, is one of the greatest challenges facing Russia in relation to the reconstruction issue because Syria is not a wealthy country as to attract a foreign labor force, according to the analyst Fahd Basha, who told Enab Baladi that it is difficult to bring in foreign work force at a social level, especially since that Syrian, in the past, worked with their full energy and exported labor force to neighboring countries, the gulf region and the world.

Sharaq, for his turn, believes that bringing in a foreign labor force is impossible, as it is difficult to convince the foreign workers of coming to a country where needed living conditions are not available.

The Syrian market will be a weak competitor before the other labor markets, such as those in Africa and the Gulf region, big salaries must be paid to attract labor force.

Helmi added that this depends on the construction companies which might bring a limited number of foreign workers, but the motivation must be really impressive, specially when it comes to high salaries, stressing that despite this the needed workers cannot all be brought from abroad.