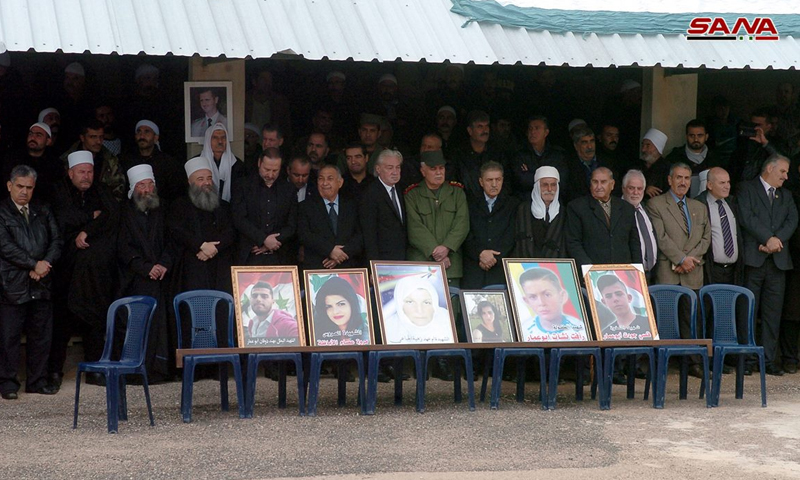 A condolence tent where the funeral of the victims of the “Islamic State’s” attack on Sweida was held – November 10th, 2018 (SANA)

“Min jab nafsuh le el-rada ma yeloumaha” (That who himself brings destruction onto himself, shall not blame the situation), with this proverb, one of the well-known figures and activists answered Enab Baladi about his opinion of the meeting that brought Bashar al-Assad, head of the Syrian regime, with the families of the abductees, who survived the grip of the “Islamic State” (ISIS) four months from their abduction.

The local activist, who refused to reveal his name for security reasons, said that the meeting and the intervals consisting of “Jawfiyat (traditional songs in Sweida ) and the excessive applause” are unlike the customs of the people of the Jabal al-Druze, Mountain al-Arab, and the sacredness of the outfit, put on by some of the attendees.

On Tuesday, November 13, al-Assad met the former abductees, their relatives and a number of the sheikhs of the “Mowahiddine Druze” (Unitarian Druze), following the sudden release of the kidnapped women from the al-Humaymah area, Palmyra, using the occasion to send messages that urge the people to call on their young men to join military service, attributing what happened to “complacence about joining the ranks of the army.”

The governorate people’s reactions contradicted; some hailed the meeting and others disapproved it. However, anger took over the landscape, specially the people who blame the Syrian regime for the “Islamic State’s’” attack of the eastern part of the governorate, following the “army’s” evacuation of all its posts a few days prior to the attack on the pretext of the Daraa battle.

The local activist added that he blames no one for meeting al-Assad, particularly if the security risks are taken into consideration, if someone was to refuse. But still, he condemned what he described as “an exaggeration” during the meeting, which included lifting al-Assad on shoulders, cheering and kissing him, wondering: “Where is dignity in this scene?”

The journalist and activist Maher Sharaf al-Din, from Sweida, posted the following on his “Facebook” page: “Anyone who relistens to al-Assad’s speech [during the meeting] would not find anything but blaming the Druze for draft evasion and urging them to join. Neutrality would not spare them the massacre; here is the conclusion of the speech.”

During his meeting with the survivors and their relatives, al-Assad said: “Sultan Pasha al-Atrash did not escape when the duty to defend Syria against the French called him. He set himself up as a leader to the Syrian revolution though other leaders existed. This is because he lifted the homeland’s flag and did not lift that of the mountain or the governorate.”

He added: “It is Syria that must be defended not a governorate or a town alone,” pointing out to the young men of Sweida, who approved to enter military service on the condition that they perform it within their governorate only.

Al-Assad urged the city’s young men further to join the army, saying that everyone who evaded “serving homeland” is guilty for every abductee in Syria and every single person, who fell dead.

“That who wants to prove his heroism, esteem and patriotism and that who speaks of honor shall join the military forces not stay behind the screens of mobiles and computers, setting strategic plans up from there,” he added.

He asked the survivors to raise the awareness of the young people who evaded the draft and to call on them to join his forces upon returning to Sweida.

“Military Service” Back to the Fore Front

Suleiman, one of the governorate’s young men required for reserve service, told Enab Baladi that he left Damascus once the reserve lists were cancelled. However, the first “investigative” checkpoint on the road from Damascus to Sweida stopped him, and the troops told him: “We will turn a blind eye on you this time only due to a confusion in the resolution. Nonetheless, he must pay a visit to the recruitment department to legalize his situation, as to be exempted of the former penalty due to evasion. In case his name returns to appear [as required for the reserve service], he will be prosecuted to the full extent of the law again.”

The Head of the Military Judicial Department Yazan al-Homsi explained, a few days after cancelling the reserve-related resolutions, that the latest pardon decree of the committers of military service crimes covers two segments of Syrian people. The first is civilians, divided into two groups: those who performed the military service and thus relived of duty and those who have not joined the army yet, and they are the ones addressed upon speaking of violations of the military service laws.

The second segment, according to al-Homsi, are the people with the different military ranks and committers of various crimes, under the rulings of the decree, which is desertion, inside and outside the country.

Enab Baladi surveyed a number of the young men whose names were erased from the reserve lists for a short time, they have all said that they failed to get a travel permit from the Recruitment Department on different allegations, the first of which is that travel permits are temporarily suspended due to a technical failure in the system.

Rami, from Sweida and based in Lebanon, said that he was getting the last residence permit which would allow him to pay the reserve military service exemption fee, but when the lists were cancelled and then reactivated, he had to send all the required permits all over again and is prohibited from going to Syria till then.

In Sweida governorate, there are more than 40 thousand people evading the draft, both compulsory and reserve, and this numbers are not official.