Syria’s Raqqa: Another Year of Pain 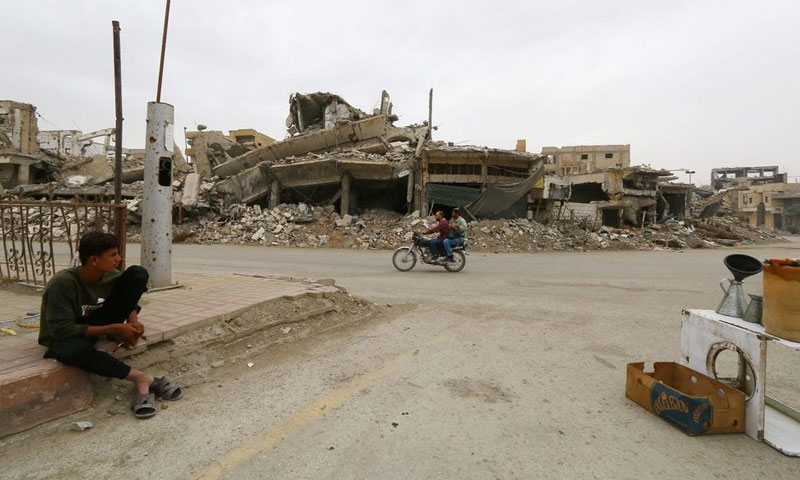 In 2017, October 17, the “Syrian Democratic Forces” (SDF) declared complete control over the city of Raqqa, after sizing it of the hands of the “Islamic State” (ISIS), through months of military operations, which led to the death of thousands of civilians as  a result of the US-led coalitions aerial bombardment or by the ISIS troops on accusations of showing opposition to its orientations.

A year passed since Raqqa was controlled; however, the city’s shape has not changed a lot since the departure of the “Islamic State,” for the buildings’ wreckage is yet in its place, while the city center did not recover its power, despite the projects launched by the “Raqqa Civil Council,” with the direct funding of the U.S.

The UN has expressed concerns over the deteriorating humanitarian situation in the city of Raqqa after the departure of the “Islamic State,” and Stéphane Dujarric, the Spokesperson for the United Nations Secretary-General António Guterres, has on December 2017, said that the people living in the city are lacking water, food supplies and other forms of assistance.

He added that the employees of relief agencies failed to reach the city and warned of the potential spread of diseases due to non-buried dead bodies of people who died as a result of explosive devises and mines.

Akram al-Ahmad, a displaced man from the city of Deir ez-Zor, who has been living in Raqqa for seven years, says that the situation in the area is yet the same with little changes made to better the people’s life.

He adds telling Enab Baladi that the basic life needs are so far unavailable, explaining that “the infrastructure is still destroyed, and the city needs a lot of restoration as to return to what it used to be. Additionally, many of the necessary services for the life of the people are absent.”

The young man describes Raqqa at the current time as a “mass grave,” viewing the billed wreckage and the rubble spreading everywhere.

The healthcare issue is one of the most affected service areas in the city. According to al-Ahmad, the services offered in this domain are still insufficient to protect the people and give them the needed treatment, for the medical points are a few and there are not enough medical staffs to cover the area’s needs, in addition to the unavailability of different types of medicines and devices.”

As a result of the inflating medical reality and healthcare, the past months witnessed a wide spread of the typhoid disease and strange illnesses such as dermal fibrosis and others which proliferate due to lack of cleanness.

He attributed the spread of diseases to the absence of preventive measures and the failure of the authorities to take adequate measures to protect people.

“There are no real reforms to this day in the governorate,” says Mohammed al-Omar, a young man from rural Raqqa. “People still rely on amperes to get electricity. Drinking water is unclean,” he said, referring to an incident in which 100 people were poisoned at the end of last August as a result of the mixing of drinking water with sewage.

Though the self-management denied that the people’s death might have resulted due to water poising, attributing it to over eating during Eid al-Adha, medical sources have casted doubt at this narrative.

Al-Omar negated the “Syrian Democratic Forces” (SDF) intention at reform, which it is keen to promote, pointing out that it reacted to the above-mentioned medical situation with the dismissal of the people who revealed the poisoning incident.

“We have not witnessed freedom or democracy, for we are yet denied the ability to express and criticize,” he added.

Obada, 21 years old media activist from Raqqa, stressed that “to the day, we are using pseudonyms to protect ourselves,” pointing out that “SDF” is following the steps of its predecessors, the Syrian regime and the “Islamic State” in suppressing the people opposing it, silencing any criticizing or different voice, in addition to prohibiting demonstrations and combating them with bullets, violence and detention.

The young man pointed out that a number of activists were arrested for posting on social networking site, while radio channels were stopped because “SDF did not like the content” of a certain piece of news, as he put it.

“It prefers loyalists even if they are ISIS-affiliates, and SDF has included a number of ISIS troops in its lines after they showed support to its authority,” he said.

Upon interviewing several Raqqa activists, they stressed that “SDF’s” success in management was limited, for the area is yet witnessing a state of chaos and security instability.

Motaz al-Ali said that the streets are suffering repeated explosion, almost daily, and the “SDF” checkpoints, spreading everywhere, failed in everything else except for exhausting people and collecting fees and taxes from them.

As a result of this, a state of “contempt” at “SDF’s” management was triggered among the different classes of the Raqqa community.

Al-Ali pointed out to “the Kurdification attempts that the area is being exposed to, through pushing the active and effective Arab elements out of the landscape.”

“SDF” is also trying to highlight the Kurdish presence even through the names of cities and streets, as well as by insisting on imposing its Kurdish curricula on the education, which widened the gap between it and the Arab society in the areas of its control and made many people, today, observe it as an authority imposed on them by force.

Al-Ali confirmed that many of Raqqa’s activists are today calling “SDF” by the “Yellow ISIS” name, in reference to the similarity of their actions to those of the “Islamic State,” while they only differ in representative colors.

Despite the wide criticism inspected by Enab Baladi of “SDF” behavior in Raqqa, a year after the “Islamic State” was removed, some of the interviewed people stress that the situation developed if compared to what it used to be under the “Islamic State,” especially in terms of the end of the shelling by the US-led coalition.

The “Raqqa Council” started recovering the dead bodies of civilians from mass graves, who were killed during the “Islamic State’s” control years.

Amnesty International stated that more than 2500 bodies were recovered from the Syrian city of Raqqa, since the “Islamic State” exited the area in October 2017 to the day.

This was stated in a press conference, held by the Organization in Beirut on October 12, concerning human rights in Syria, in which it addressed the deterioration of the humanitarian and service related status in the city of Raqqa, calling the international community to make additional efforts to better the living conditions there.

Anna Neistat, the Deputy Director of the Amnesty International, said that 80% of Raqqa is destroyed, for more than 30 thousand houses were completely destroyed and 25 thousand others are partially destroyed.

She added that there are places where thousands of people are buried underground. The organization estimated that about 2521 dead bodies are recovered to the day, while it is believed that about 3000 dead bodies are yet under the ruble or are in mass graves, most of whom are civilians as she put it.

The “Amnesty International” believes that the dead people in the city of Raqqa, passed a way due to the US-led coalition attacks against the “Islamic State,” saying that it  presented documents to the US-led coalition, which admitted the killing of 77 persons only, adding that “they have to conduct investigations and hold the responsible accountable for the illegal extrajudicial killings of civilians.”

The human rights organizations describe Raqqa as an “afflicted” city, because of the destruction that befell its infrastructure due to mines and war remnants left by the” Islamic State,” leading to the weekly death of dozens of civilians.

The principal dilemma facing the “First Response Team,” under the “Raqqa Civil Council,” is the recovery of dead bodies from the mass graves, estimated at about 2800 bodies.