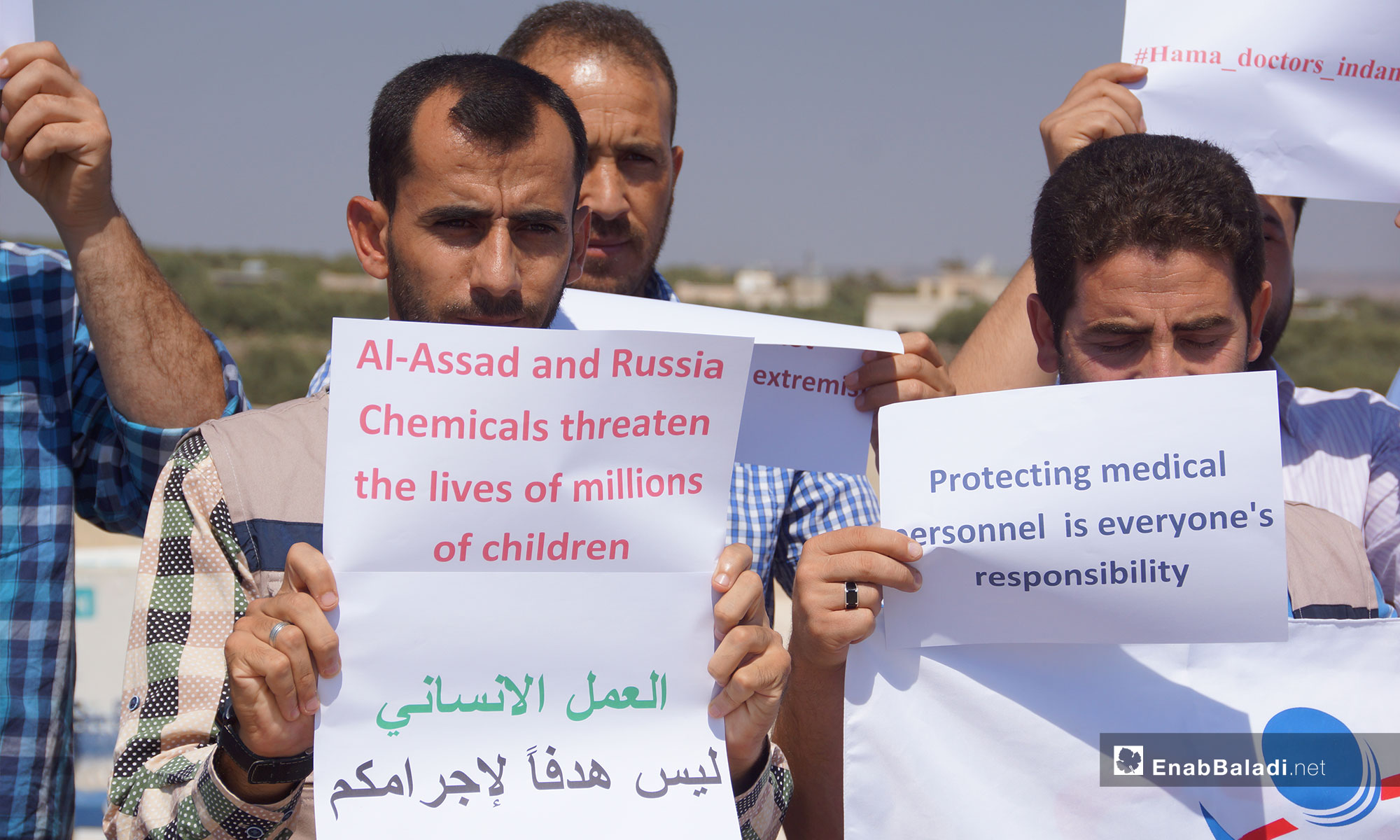 A protest denouncing the aerial attacks of the Syrian regime and Russia’s air force against the medical staffs at the Hama Healthcare Directorate – September 17, 2018 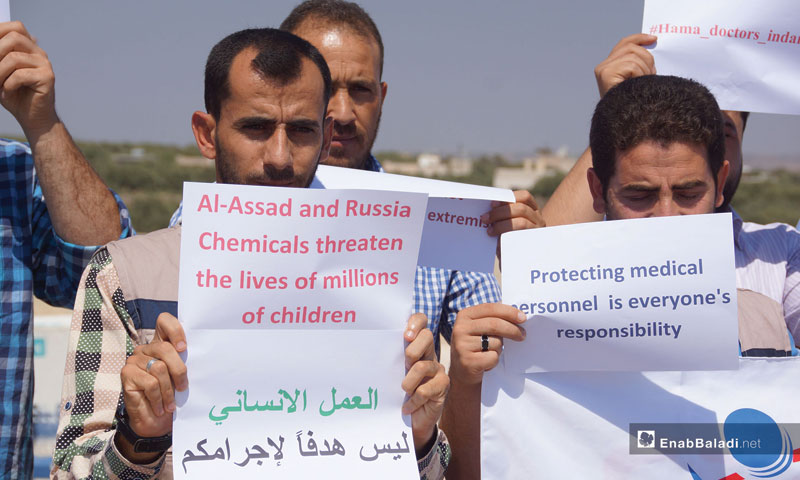 The medical and educational staffs and the Civil Defense teams organized sit-ins in the governorate of Idlib last week, demanding protection, care and putting an end to the war from the international community.

The sit-ins took place in several areas in the governorate that is toping the Syrian landscape these days, aiming to deliver a clear message of protest to the international community in refusal of the threats of the Syrian regime and its allies.

Said al-Deek, the head of Kafr Nabl Educational Gathering, told Enab Baladi, while present at one of these sit-ins in the city, that “we came to condemn Assad’s forces and Russian allies’ destructive actions, represented by bombarding schools and medical and service centers in Idlib governorate,” adding that “we stand with the Civil Defense who sacrificed a lot in this field.”

The Syrian official media is doing an effort to accuse the “Civil Defense” of planning for chemical attacks in Idlib, in an attempt to distort the image of the civil teams in the governorate in the eyes of the world.

The participants carried signs that call the international community for protecting the city’s children and making an action to provide them with care, in addition to bettering the educational situation and the healthcare services offered to them, in a manner that guarantees an international protection for all the staffs, necessary for the society’s construction as he put it.

Ahmad Meghalj, the Principal of the Kafr Oweid School, told Enab Baladi that the objective of these events is to deliver a message to the international community that the Syrian children are suffering an atmosphere of war and destruction, and that the most important thing which they today need is a complete ceasefire, stopping the shelling and destruction.

“The Syrian bloodshed must be stopped, and al-Assad and his allies who targeted the children and schools must be held accountable,” he added.

The participants held slogans that confirm the shortage of services and staffs in the fields of education and healthcare, in addition to medical devices, pointing out to the role of these foundations in the development of the psychological and cultural status of the city’s children in the shadow of the lingering war in Syria.

“We are advocates of peace not terrorism and war,” this is what the Director of the Civil Defense in the city of Maarrat al-Nu’man, Mohammad Faysal Hamad, said in an interview with Enab Baladi, in which he pointed out to the “White Helmets” role, which is a humanitarian mission, the function of which is to protect and help civilians, in contrast to they way it is being described by the Syrian regime.

The medical staffs in the governorate have also tried to deliver a humanitarian message to the international community through the slogans they held, demanding the protection of medical staffs and hospitals, stressing that Assad’s forces indications about the chemical weapons have turned into a nightmare threatening civilians’ life.

For his part, Mustapha al-Eido, Deputy Director of the Idlib Healthcare Directorate, said that these sit-ins carry messages protesting the targeting of hospitals and all medical facilities. At the same the time, the signs hold messages in solidarity with the popular demonstrations that the governorate of Idlib has been witnessing lately, in a manner that stress the rightful demands which the demonstrators called for.

According to al-Eido, the key message is to give the international community a proof of the peaceful and civic nature of the healthcare establishments in Idlib governorate.

The sit-ins followed the Turkish-Russian deal, which casted the ghost of war away from Idlib, the home to about four million civilians, according to the statistics issued last August by the “Response Coordinators” team

The United Nations has estimated that about a million children are based in Idlib governorate.

The deal followed Assad’s forces deployed reinforcements to the surrounding of the governorate in preparation for an attack against the opposition factions and shuttle talks between Turkey and Russia, as well as action on the part of UN-related and international entities which interfered as to stop the attack against the area, the Syrian opposition’s last stronghold.