Syrian Regime about to Dismantle Its Key Security Headquarters in Daraa 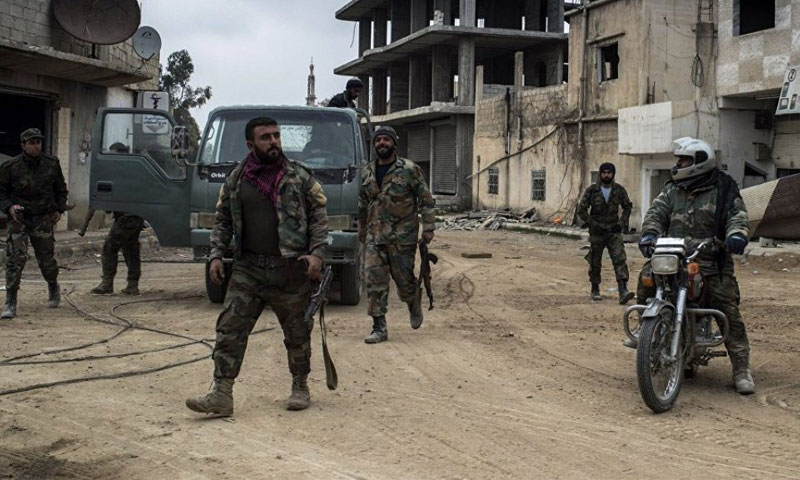 The Syrian regime is preparing to dismantle one of its key checkpoints in the city of Daraa, which in the past a few years has turned into a central security center that witnessed the detention of hundreds of civilians.

Today (Friday), August 10, media activist Omar al-Harir said, on “Twitter,” that the Syrian regime’s security and military committee has signed a decision providing for dismantling Hamida al-Taher checkpoint in the city of Daraa.

He added that this checkpoint is one of the very first checkpoints that have been erected in the city. It has a notorious reputation, because of which hundreds of civilians were killed and thousand others were arrested.

The eradication of the checkpoint followed Assad’s forces’ complete control over Southern Syria, represented by the two governorates of Daraa and Qunietra and the regime’s beginning to conduct “status legalization” agreements with militants and civilians, who refused to exit towards Idlib.

Enab Baladi’s reporter in Daraa said that Hamida al-Taher checkpoint witnessed the field executions of dozens of civilians, a checkpoint that the Syrian regime erected in the first year of the Syrian revolution, 2011.

The checkpoint is affiliated with the Military Security Branch in Daraa governorate, located in a strategic position. It derived its name from Hamida al-Taher’s park, in al-Sahari neighborhood.

In a former report, the “Syrians for Justice and Accountability” Organization said that the checkpoint is not like any other security or military checkpoint, as it developed from a security checkpoint to a huge underground center, with a number of secret rooms under the ground, in the basement of (Afaaq Educational Institute).

It became a place for the most hideous torture-based practices, according to people whom the organization has met.

The prisons of security branches are yet striving with detainees and torture persists, amidst monthly statistics that address dozens of victims, whose names are documented by human rights organizations.

The reporter said that the Syrian regime, in the past a few days, started to send death notes of detainees to the Civil Registry Department in Daraa city, the estimated number of which is 50 death notes.