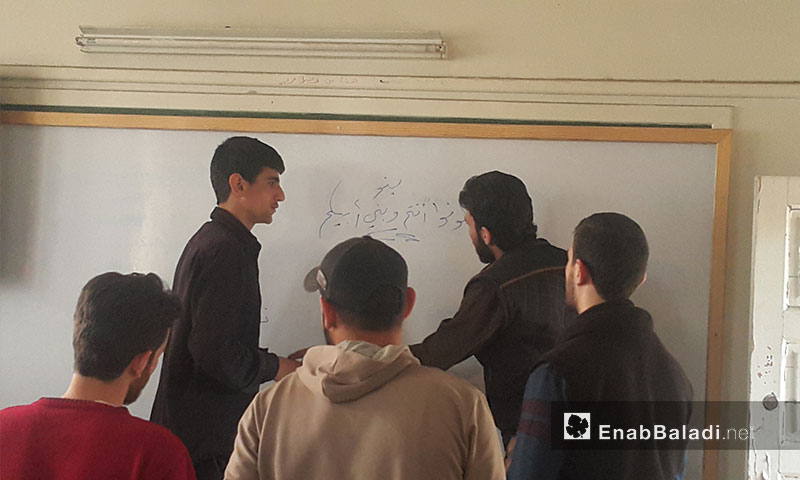 A number of Eastern Ghouta’s internally displaced students have on August 7 launched an appeal to the concerned entities of the Turkish government as to provide facilitation, so they could enter Turkey to continue the registration process at the universities where they managed to get an admission by the virtue of scholarships, which they applied to on the Internet.

The statement, which students published on social media platforms in both Arabic and Turkish, expresses their hope that the concerned entities would answer their appeal, for many of the university students, who were forcibly displaced from Ghouta to Northern Syria, want to pursue their education in Turkey, but most of the means to cross the borders are “illegal,” with many difficulties and risks that pose a threat to their lives, as former displaced people said.

Mahmoud, 22 years old student from Ghouta and one of the people qualified to study in a Turkish university, said: “After five years, we broke off siege and war, during which we strove to pursue our education, but the conditions were not convenient. Despite the pain of displacement we are living, we hope to continue our education at Turkish universities to recover the years we lost in siege.”

“We applied to several universities and obtained admissions to many of them; but this was not enough to facilitate our entrance to Turkey through the border crossings in Northern Syria. We contacted many entities but to no avail,” he added.

In the same context, a number of students registered for “YÖS,” a test for foreign students, conducted by Harran University in the city of al-Bab, from which they obtained admissions, while the Education Directorate continues the registration proceedings so that students can exit the area to the university when the academic year starts.

Mahmoud commented on this saying: “When the YÖS test was conducted, many students where in areas far from the city of al-Baba and failed to apply to it, which cost us the chance of exiting the area through Harran University that has a partnership with the Education Directorate at the city of al-Bab.”

Teacher Fawaz al-Sayaih, the head of the Education Directorate at the city of al-Bab, told Enab Baladi that the Directorate’s task is to check the students’ documents, translate and organize them to be sent to the Turkish side to get an entrance permission to Turkey for the students who obtained an admission to the University of Harran. This process covers students accepted by Harran University only due to the partnership between the latter and the Directorate of Education, which is so cooperative in that concern.

“The documents of several students who have been accepted by universities other than Harran were sent to the Turkish side. However, the issue depends on the Turkish side’s approval of their entrance, especially that many of the students lack enough personal identity documents, which complicates the situation further,” he added.

According to al-Sayaih, the Directorate of Education’s role is limited to inside Syria, and it cannot secure any proceedings in Turkey, for its mission is based on preparing the documents and filing them to the Turkish side, pointing out that the Directorate is seeking to support the students through the universities that are opening branches in the areas of the “Euphrates Shield.”

The Directorate of Education in the city of al-Bab sealed a deal with the University of Harran to open a branch for the latter in the city last April, and arrangements are being made to assign an educational committee addressing different fields to begin the students’ registration and learning process.

The Turkish government offers scholarships to foreign students from different parts of the world, including Syria, and many Syrian students were given admissions and allowed legal entrance to Turkey. Nonetheless, some of the students faced difficulties relating to lacking official documents required for a university enrollment, which cost them the opportunity to study in Turkey.