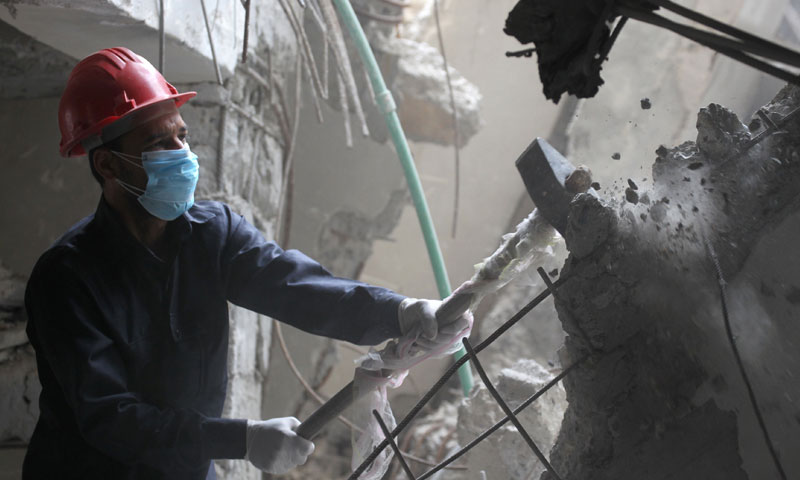 In the Euphrates river, children and adolescents are swimming; young men are laying on the banks, here and there. They spend time chatting and waiting for the sun to set. This scene is today attached to the old bridge in the city of Raqqa, so familiar and repetitive.

These young people blame the city’s authorities, for the renovation has been late and the reconstruction process is handicapped, according to which they lay thus, doing nothing, as Hussain Assaf (32 years), the owner of an internet cafe, says.

Assaf, known as “Abu Ahmad”, tells Enab Baladi that “the (Syrian Democratic Forces) and their local council have achieved nothing; many dead bodies are yet under the rubble, left in open places while decaying. Many of the building and restoration processes have also been stopped under the pretext of organization and the need to extract required licenses.”

The “Syrian Democratic Forces” (SDF) managed to recapture Raqqa, which the “Islamic State” was in control of on October 2017 and appointed a local council to run the city.

Despite his joy over returning to “his most favorite place in the world”, as he describes Raqqa, misery and nostalgia to the “old Raqqa” and refusing its current status shows in every single word he utters, protesting to the continuing lack of services and the insufficient restorations done by the local council, saying “no electricity, no water, they are doing nothing but painting and renovating the traffic intersections, pictures and signs on the walls, just the same as (ISIS)  has previously done,” considering that “painting al-Dalah round about, for example, would not erase the image of destruction surrounding it. The images of the leader Öcalan, similarly, would not give people a decent life.”

Some of the city’s people are conducting individual initiatives, cleaning their houses and the space surrounding them, despite the danger imposed by mines and other war remnants spreading everywhere.

Citizens, interviewed by Enab Baladi, expressed an overt objection to the situation, demanding more services and refusing the suppression they are suffering under “SDF”. The people’s protest is culminating in the shape of peaceful demonstrations, which “SDF” does not shy away from suffocating.

Mohammad al-Hussian (Abu Abdullah), a man from the city of Raqqa, tells Enab Baladi that “fear of war remnants has returned to inhibit the city, and of SDF’s tyranny, with the proliferation of theft and killing,” pointing out to the tension rising among the people and “SDF” troops, in addition to the escalating internal disputes among SDF members, which all threaten stability and prevent progress.

The disputes between “SDF” and local groups, who have joined it, are rising; on top of which is “Liwa Thuwar al-Raqqa”, one of the largest groups of an Arab formula. “SDF” has arrested its leader Abu Issa and besieged its headquarters in Ayn Issa.

This triggered anger and calls for demonstrations, as a refusal to “SDF’s” policy and as a result of the arrests and the forcible conscription.

“The behavior of a number of SDF’s troops is sometimes annoying to the people, especially during last Ramadan [the month of fasting], such as eating in public and showing disrespect to traditions, as well as the destruction of several houses and shops and random detention and using force to combat the people’s demonstrations,” he added.

The life difficulty did not prevent hundreds of people from returning to the city; the numbers of the returnees to Raqqa are markedly increasing.

Rami (44 years), a teacher and a former refugee at the Tell Abyad camp, who chose to come back to his house in Raqqa, says that more than 20 families, whom he is familiar with, have returned to their houses, expressing other people’s intention to return in the few upcoming months.

The United Nations Office for the Coordination of Humanitarian Affairs stated that 138 thousand people have returned to Raqqa since October 2017.

The UN Office has pointed out to the increasing number of humanitarian and relief organizations in the area, but it stressed that “pollution,” due to explosive materials, is yet a major source of concern to people, complicating out reach and humanitarian operations.