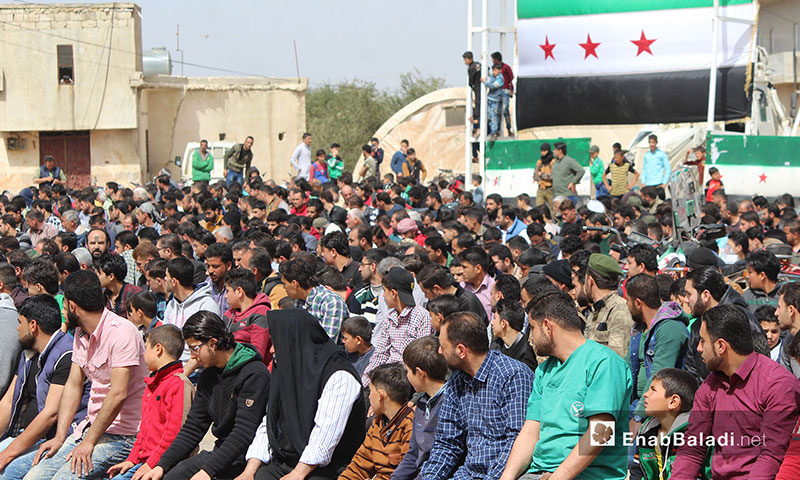 Thousands of civilians in a picket in the Bab al-Salameh crossing in northern Aleppo calling on Turkey to move towards Tell Rifaat – March 23, 2018 (Enab Baladi)

The Turks and Russians have shaped the map of the city of Tell Rifaat, northern countryside of Aleppo, through an agreement that guarantee the displaced people’s return into the city, following Assad’s forces and allied militias’ complete departure, stipulating that “Free Army” factions do not enter the city with allocating the responsibility of security to local police, consisting of the area’s people themselves.

The current map resembles that which Turkey and America have designed for the city of Manbij, eastern countryside of Aleppo, being a unique case in Syria since the break out of the conflict, because the  terms provide for a joint international administration, alienating the local forces on the ground which might handicap the implementation of the agreement.

Tell Rifaat and its surrounding are of symbolic nature to the people, for it was among the first cities to rebel against the Syrian regime in the northern part of the country. The opposition factions lost it early 2016 to the “Syrian Democratic Forces” (SDF), the pillar of which are the (Kurdish) “People’s Protection Units.”

After the finalization of the “Olive Branch” Operation, launched by Turkey, the city and a few nearby towns remained under the control of the “Units” and Assad’s forces, and its fate became liable to the Turkish-Russian understandings concerning Northern Syria.

A Local Council away from Militarization

On June 13, 2018, the prominent figures in Tell Rifaat met with Turkish officials in the city of Azaz, northern Aleppo, to plan for the city’s future and came up with a set of terms that guarantee the return of all civilians to the area.

The agreement’s terms, which Enab Baladi managed to get a copy of, provide for the exit of Assad’s forces and allied militias from the city, stipulating that a joint Turkish-Russian presence takes their place.

The meeting’s recommendations stressed that only the people of Tell Rifaat, but not the military factions, are allowed entry to the city. The agreement also prohibits arms in the city and provides for the formation of a local council that consist of local police, the members of which are a selection of the city’s young men.

Bashir Alito, the head of the Political Office in Tell Rifaat, said that the Tell Rifaat agreement is different from Manbij’s road map in terms of the sides that contributed to its creation, while it shares the same extent of ambiguity to the day.

Alito told Enab Baladi that the guarantees offered by the Turks focus mainly on the complete departure of Assad forces, stipulating that they are replaced with Turkish forces and Russian troops, pointing out that stages have been set up to implement the agreement’s terms, the first of which is the approval.

Last March, the Syrian regime took hold of eight areas in Tell Rifaat’s surrounding, arriving at the two towns of al-Zahraa and Nubl.

In the past a few weeks, the city has witnessed military movement on the part of Assad’s forces, accompanied by talks of 4th Division convoys’ withdrawal to further points behind. Assad’s forces, in the past week, have also burnt the city’s houses, suddenly and without a clear justification.

Tell Rifaat excels other cities in the Aleppian countryside, for it’s the first city to rebel against Assad’s regime in Northern Syria. To the day, its people, and full of pride, call it by its ancient name “Erfad”, swelling with honor that it was the major capital of the Aramaic Kingdom of “Bit Agusi” in the 18th century, which included Aleppo back then.

The city is only 13 kilometers away from the Turkish borders, and it was given its current name, Tell Rifaat, by the Ottoman Empire when it entered Syria early in the 16th century.

The first of the city’s demonstrations broke out in April 2011, which came in solidarity with Daraa, then besieged by Assad’s forces; Tell Rifaat’s people kept the demonstrations against the Syrian regime on, until the first of its martyrs fell in September of the same year during a large scale security campaign launched by the regime against the city.

The peaceful movement in the city was on the rise to the point where Assad’s forces stormed it for the second time in April 2012, burning many of its houses and shops, killing 14 young people of the same family and inflicting a massive damage to the city.

Between 2013 and 2014, Tell Rifaat suffered the rule of the “Islamic State” which had a great influence in Northern Syria, and was sent out of the city in January 2014 after a military campaign by the area’s “Free Army” factions.

Early in February 2016, Assad’s forces triggered a massive ground offensive, depending on foreign militias and the Russian air forces and managed to fracture Aleppo and its nearby rural part from Northern Syria, due to which the cities of Tell Rifaat, Mare’ and Azaz were almost besieged on three sides.

On March 15, 2016, the “Syrian Democratic Forces” SDF controlled Tell Rifaat following battles and confrontations with its remaining factions, drained by the combat that joined them with three sides then (ISIS in the east, Assad’s forces in the South and the Kurdish Units in the west), a thing that ultimately led to the displacement of the majority of its population towards the borders shared with Turkey.