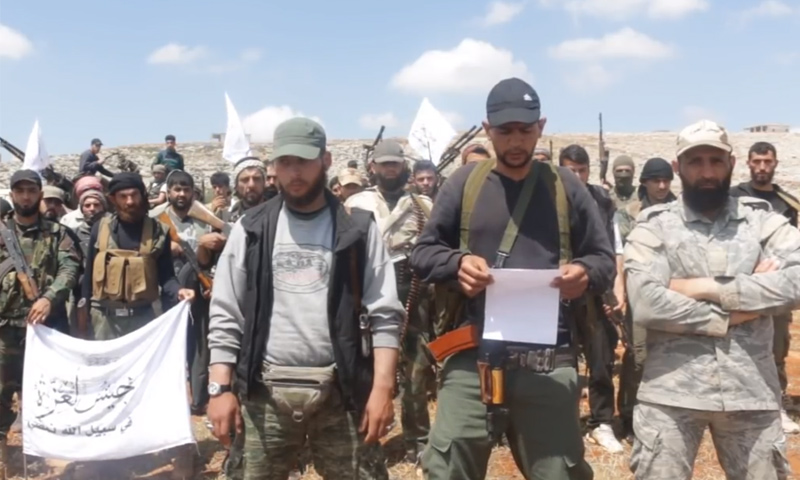 The “Jouber and Ghouta Revolutionaries” brigade has announced that it will be integrated into the faction “Jaysh al-Azza”, which operates in Hama Governorate. The merger is to take place around one month after the Ghouta faction’s arrival in northern Syria as part of an evacuation agreement with the Syrian regime.

In a video posted on YouTube on Monday 14 May, the Ghouta brigade announced that it would be joining “Jaysh al-Azza” as a step toward continuing the Syrian revolution until toppling Assad’s regime.
The merger statement was delivered by the leader of the brigade, Abu Maher Asoud, a prominent commander who operated as part of the faction “Faylaq al-Rahman” during military campaigns in Eastern Ghouta.
According to Enab Baladi’s sources, Maher’s military operations were focused in the Damascus neighbourhood of Jouber. Maher advanced through the opposition ranks from being a sniper to being the leader of the 120 Brigade in Jouber, which is part of “Faylaq al-Rahman”. In this post Maher was at the head of a company of 800 fighters.
Operations which “Jaysh al-Azza” has participated in have been focused in northern Hama Governorate. The group has played a front line role since the beginning of Assad’s forces’ military campaign in the region.
“Jaysh al-Azza” is also deployed in northern Homs and Latakia  governorates, and is affiliated to the “Free Syrian Army”. “Jaysh al-Azza” is among the first factions which was targeted by Russian fighter jets after the Russian military entered the Syrian conflict at the beginning of October 2015.
“Jaysh al-Azza” announced near the end of 2017 that it would not abide by the ceasefire arrangement with the Syrian regime, after Assad’s forces targeted its bases with airstrikes and continued their campaign of clearing out the areas which the faction operated in. This announcement also followed the cutting off of military aid by the US; a spokesman for the group, Captain Mustafa Maarati, said that aid had been suspended to “Jaysh al-Azza” and other factions for unknown reasons since August 2017.
The faction “Homs al-Adiya”, which is led by Abdel Basit al-Sarout, also announced its integration into “Jaysh al-Azza” last January, and has participated in two of its battles in northern Hama.
“Jaysh al-Azza” is known for its fighters’ use of TOW guided missiles, and the group has destroyed tanks belonging to Assad’s forces during recent days.
Tens of thousands of opposition militants have been transported to northern Syria under the terms of the Eastern Ghouta evacuation agreement.These fighters have been distributed between Aleppo and Idlib governorates. It is not currently known exactly how many fighters have been included within this agreement.
According to an internal message obtained by Enab Baladi two days ago, “Faylaq al-Rahman” has called on those who want to to register with the organisation and join its operations.
An official in “Faylaq al-Rahman”, Abu Alam Maher al-Masri, explained that fighters in possession of weaponry which they are competent in using will be given $200 immediately after registering. Those fighters that have not retained their weaponry will be given $100. Fighters who have sold their weapon can receive a salary after a month after registering their names.