Al-Bahrah Camp’s Refugees: All We Get Is Promises 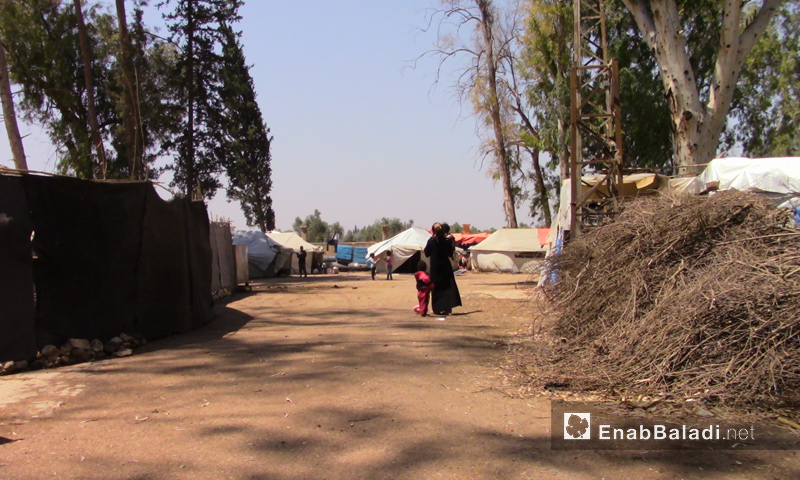 Abu Louay, the son of Jillen, Daraa governorate, was choking on the reality which he and his family are living and how life has deteriorated after they were forced to escape their town.

The 45 years old man decided to leave after the “Islamic State” approached his town, located 30km away from the center of the governorate in Northern Syria. ISIS has actually controlled Jillen on 24 February 2017.

The family’s life has turned upside down after they left to the adjacent town of al-Bahrah, for they lived in a tent that fail to protect them from winter’s cold and summer’s heat.

“Abu Louay” says that they are deprived of aids, and in spite of all the promised logistic support, no one has presented them a thing so far.

The family, formed of seven members, is compelled to buy water, and it does not even have a share of the usually offered food baskets, said the wife, expressing her contempt over the concerned entities’ negligence, especially that she has a daughter who needs urgent help, after she developed a disability, while one of her sons, Abdallah, was shot in the leg, which also caused him a disability and rendered him out of work.

“Abu Louay’s” family is not alone in this dilemma, as the number of the families based in the al-Baharah camp has reached a hundred, all of whom suffer the same conditions, which have been continually ebbing away.

The Councils Act in Coordination with the Organizations

Abdul Karim Trad, the head of the IPDs Office under the local council in Tell Shihab, describes the council’s resources as limited, adding that the area is under a huge pressure, as it has been receiving and trying to support the displaced people since the beginning of the revolution.

The local council in the town of Tell Shihab resorts to the concerned humanitarian entities to alleviate the displaced people’s suffering, adding that the number of the displaced people has increased since the “Islamic State” succeeded in storming the neighboring towns, Trad told Enab Baladi.

About providing the camp with drinking water, Trad said that the council has communicated with the “RED” Organization to extend water pipes from the town of A’uyun al-Abed to the al-Bahrah camp.

He continued saying that the project is under implementation according to the donor organization’s promises, and that after is completed, the project will suffice and solve the Camp’s drinking water problem.

Last year, the local council in the town of Tell Shihab implemented a sanitation project for the First Refugee Center in the town of Zayzun, which administratively follows the Tell Shihab Local Council, according to Tamer Jea’raa, the deputy head of the council, who added that the council is working on another project, withdrawing drinking water from the town of A’uyun al-Abed to the al-Bahrah Camp.

The local council will also start a trash cleanup project in cooperation with “Watan” Foundation, according to Trad.

The Camp’s people are waiting for an answer to their questions and complains and looking forwarded to get life’s basic needs in a town that turned into their home, until they could return to the town from which they were displaced.

The “Islamic State’s” invasion of the towns of Beit Sahem, Tasil, Tall al-Jumue and Jillen, in March 2017, has displaced hundreds of the area’s people, which placed the local councils in the nearby towns and villages under the massive pressure of the necessity to provide these people’s needs, while the challenges facing the entities concerned with the refugees’ affairs keep inflating, especially with the local councils’ impotence and the fluctuating support of donor organizations.

Al-Bahrah is not the only camp in which the area’s displaced people have taken refuge, for there are several other camps in the area, the largest of which is the First Refugee Center, which accommodates a thousand family, in addition to the al-Bandak, al-Sa’eiqa, Ayn al-Basal and al-Asha’ri camps.