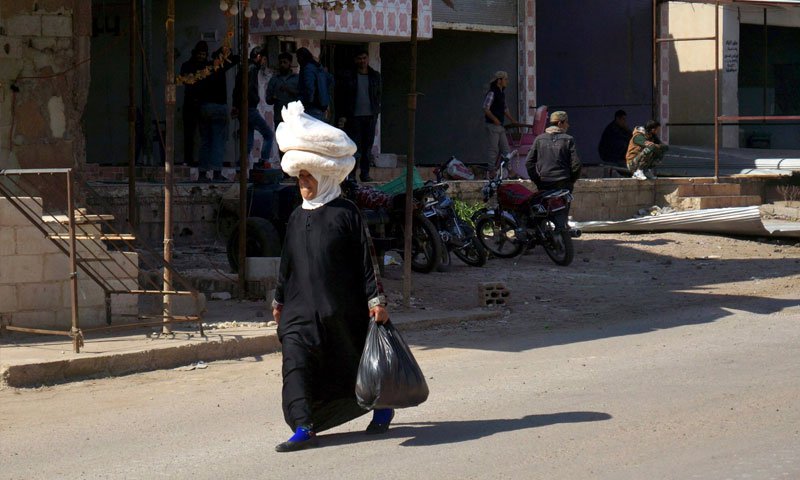 A women carrying bread over her head in the al-Ghariyah al-Gharbiyah town in rural Daraa – February 29. 2016 (Reuters) 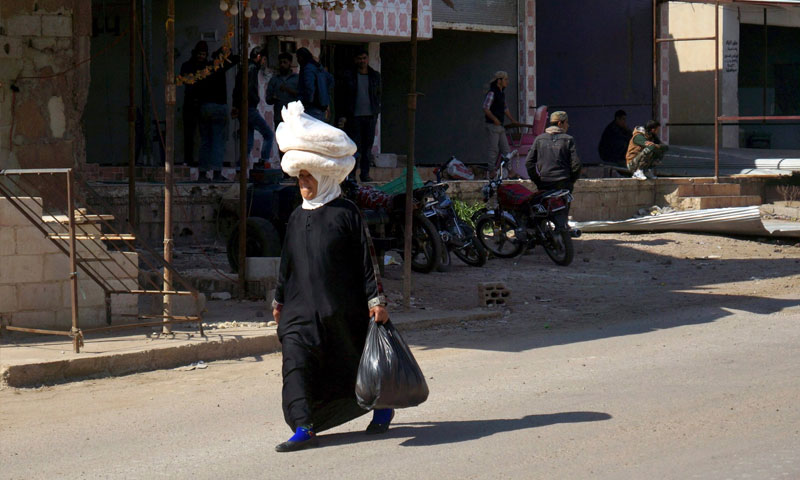 Southern Syria is about to undergo a crisis in relation to bread prices, after the donor entity has gradually cut the funds allocated for buying flour.

In mid-March, the American Foundation “FAB” has announced that its support for flour in southern Syria would end late in 2018, following five years of funding the materials that constitute the life nerve in Daraa.

The foundation has informed the “Assistance Coordination Unit” (ACU), known as “Watad” in Southern Syria, responsible for the flour distribution of the fund’s duration’s end, without furthering reasons about the cut.

“ACU” has explained that “FAB” Foundation has informed it through a letter, in which it said that “the donor entity of FAB Project would like to inform you that the donation would not be renewed; the project is decided to end at the end of 2018.”

For his part, the Minister of Economy’s Assistance of the Syrian Interim Government, Abdel Hakim al-Masri said that the foundation would gradually cut the funds to stop it ultimately at the year’s end, which means that the opposition-held areas, in Daraa and Quneitra, shall depend on themselves to provide wheat and, accordingly, flour.

How Does Flour Enters Southern Syria?

The funded flour enters Southern Syria from Jordan, and four partners contribute to the project, as a source, who refused to reveal his name, has informed Enab Baladi.

According to the source, “FAB” Foundation offers the monetary value to the strategic partner in Jordan, for example, represented by the “Regional Syrian Program” (Chemonics), which in turn delivers flour to the storages of the “Assistance Coordination Unit.”

“ACU” supervises the admission of flour to the Syrian territory from Jordan; and then, it distributes it to the local councils according to an understanding memorandum signed by the two partners.

The local councils in the cities and towns in Daraa governorate deliver flour to bakeries due to another understanding memorandum, including delivery, reception and documentation.

All the partners sign the judicial warrant concerning the distribution means and percentage according to the populations’ distribution of each city or town. The warrant includes three members, who are officials and have the authority to document.

With the gradual fund cut the crisis’ features started to appear, for the price of bread rose from 100 Syrian pounds per packet to 125 Syrian pounds. It is expected that the market would witness constant increase in prices.

Enab Baladi’s reporter in Daraa explained that the people began, with the decrease in the amount of bread in the market, resorting to the black market, where the price of a bread packet reaches 300 Syrian pounds.

The price of a single bread loaf ranges from six to seven Syrian pounds, but the local councils are compelled to sometimes raise its price as to cover the production cost.

In a statement by the Daraa City Local Council’s Head Mohammad al-Masalmeh, he said that “ACU” started reducing the amount of flour allocated for Daraa, after the displacement wave that it witnessed.

The weekly flour share in Daraa was 17 tons, but it has been reduced to 11 tons per week.

According to al-Masalmeh, the Council has demanded increasing the share, but there was not a response, adding that the donor entity is decreasing the amount by half to a ton every week, which turned Daraa’s share into nine tons after the decision made by the donors.

The concerned foundations and organizations in Southern Syria are attempting to find a solution for the crisis and the rising prices that the citizens will be suffering, under the deteriorating living conditions and the increasing rates of unemployment in the area, as well as the decline in the per capita income.

According to Daraa Local Council’s head, the Daraa Governorate Council promised to resolve the crisis and to find substitutes for the “FAB” donations, whether by turning to other donor organizations or bey self-sufficiency and resorting to the local wheat production.

Al- Masalmeh mentioned that the governorate can produce 100% of the needed amount depending on local wheat production, but the citizens will be forced to pay extra money.

The Assistant of the Minister of Economy under the Interim Government Abdul Hakim al-Masri said that the wheat grown in Horan is of the hard type, which is difficult to grind, adding that the governorate does not produce soft wheat.

According to al-Masri, in the frame of experimentation in an attempt to secure the next year’s seeds, today the governorate is planting soft wheat; he added that the fields planted with soft wheat this year might provide 40 to 50 tons, according to the production process.

He added that this type of wheat needs to be planted in new areas, where hard wheat has not been planted, for it requires additional amounts of water.

According to al-Masri, the governorate owns a single mill, which is not enough, for the private grinders cannot achieve the demanded goal. He believes that in case two mills have been secured, in addition to the existing one, the area’s needed amount of wheat would be produced.

However, self-sufficiency by depending on local production will lead to a rise in the bread prices, which might reach the double or more, to, thus, create a new burden to the people, according to al-Masri.

The opposition-held areas in Daraa approximately need 24 to 25 tons of wheat every year.

Daraa’s wheat production this year is relatively sufficient, according to what a source has told Enab Baladi, pointing out that farmers’ priority is to sell the harvest.

The local councils’ lack of resources and the postponed purchase processes by the Interim Government is indulging the merchants in the black market’s biddings to buy the harvest from the farmers, then sell it to the Syrian regime’s government, which increased the wheat price from 145 to 175 Syrian pounds this season.

The Wheat Reality in Daraa Governorate

The planted area in Daraa governorate is 181 thousand agricultural acres, according to the “Assistance Coordination Unit” (ACU) report of the areas it managed to reach.

The area planted with wheat in Daraa, out of the totally planted area, according to evaluation, has reached 138 thousand acres, more than 90% of the estimated area.

Hard wheat occupies 99% of the wheat planted area according to 2017‘s estimates.

The hard wheat category includes nine types, of which the type “Sham3” constitute the half; it is a drought-resistant wheat type, distinct for its ability to adapt with the environment of different areas.

In the second place comes the type “Duma1,” which constitute 18% of the wheat planted area, depending on the rainfed planted areas; it is distinct for its ability to handle draught and adaptation with the environment of different areas.

The planted unsubsidized wheat constitutes the larger percentages, for it forms 90% of the governorates’ total production.

Through a report, the Food and Agriculture Organization (FAO) confirmed this, saying that “even though agricultural production is yet possible in many parts of Syria, many farmers cannot attain the inputs which used to be supported and the prices of which have increased massively; or they cannot afford their costs.”

The costly and limited production is causing a rise in the prices of food materials, which is dangerously affecting three quarters of Syrian people, who are, currently, below poverty line, most of whom are farmers, according to the report by “FAO.”