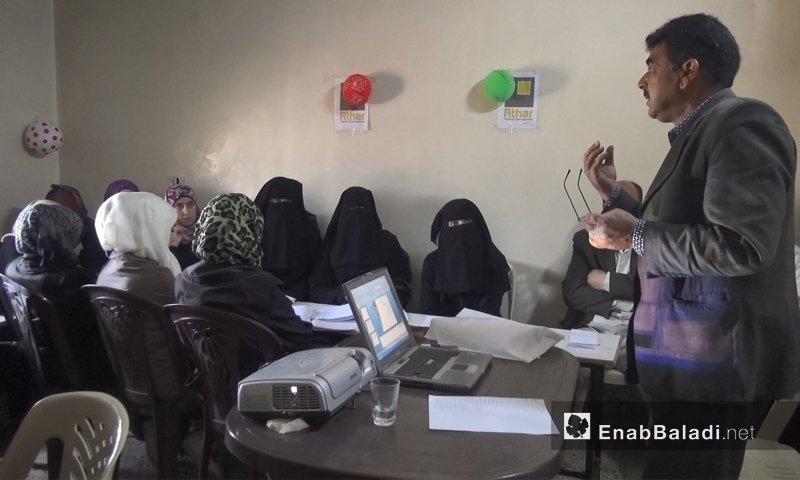 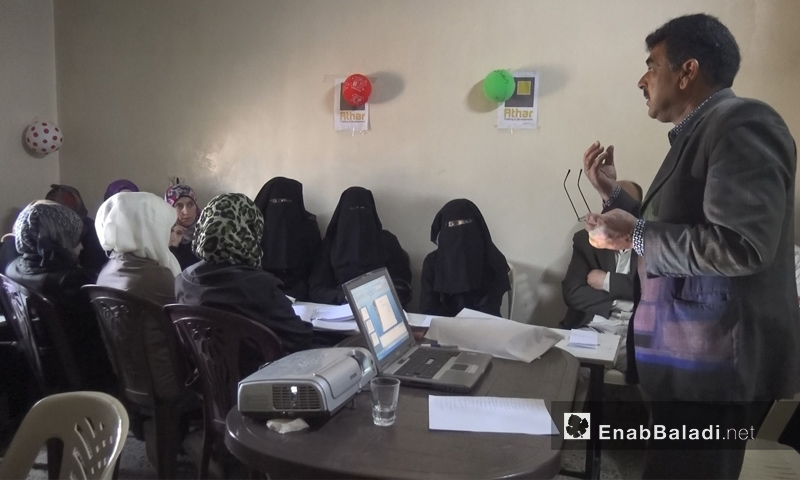 “We have learned that education does not stop even during wars,” says the trainee Khadijah Bakour, who joined training courses under the Children Homeschooling Project, in the al-Joula area, in the northern countryside of Homs. The courses provide mothers with the tools to teach their children and their neighbors’ children, after acquiring the needed skills helped by specialists.

The first phase of the project, which “Athar” Training Organization runs, ends late in April. Khadijah, in her interview with Enab Baladi, points out that the courses “were satisfying and rich with the basic information about the child’s protection of disasters, time organization, stress management and proper education.”

The trainee wishes that the project, called “Mother Teachers”, would expand as to cover all of the northern countryside of Homs, “to create larger opportunities for teachers and other children.”

The Organization has targeted a hundred women trainees, according to Anwar Hamdosh, the logistics official, in “Athar” (Trace), who tells Enab Baladi that all these women will be present in the second phase of the project, under which they will be responsible for teaching 15 children in a geographic are of no more than 500 meters.

“Athar” provides all the supplies needed for the two phases, according to Hamdosh, pointing out that the Organization has choose homeschooling “for reason arising from the area and to have the ability to transport children in case of emergencies.”

The project started early in last March. Its manager, Wafaa Radwan, says that it started receiving trainees according to specific criteria, on top of which are the following: The woman must not already have a salary and does not work for any other entity. In addition to this, all women should be at least high school graduates.

Most of the chosen trainees “are breadwinners and wives of martyrs or detainees,” according to the project’s manager, who points out that the Organization has formed a fact-finding commission, as to examine the women’s graduation certificates, their humanitarian conditions and that they fulfill the proposed criteria.

Halimah Jaamour, a member of the recently formed “Women Union in Homs”, says that the Union has coordinated with “Athar” since the project includes women, pointing out, in her interview with Enab Baladi, that the Union “have nominated a number of mothers to be trainees. The Union joined the interviews committee and process of studying the women’s conditions, after it made sure that the Organization, running the project, is serious.”

The training process follows six training packages, based on the “UNICEF” curriculum, for emergencies, that would be taught to children in the second phase. The most important of these packages are:  Life skills, gender, interactive education, the basic standards of child protection and education during emergencies.

During the training phase, the woman trainee receives a salary that “help her dispose of the need to work during the training and have a better comprehension away from the concerns of making a living for her family,” according to Wafaa, pointing out that the project was implemented in Northern Syria, in Idlib, Azaz and Saraqib, as well as the Turkish city of Gaziantep, within the Organization’s headquarters.

“We have made a plan that is years-long, not temporary,” the project manager explains, which aims to stay with the child until advanced stage of his/her age; we do not seek to help them get over their illiteracy only, in addition to developing the skills of women who wish to continue with the project.

Wafaa believes that other entities shall participate through similar projects, pointing out that “the mother’s effort of teaching her children, her neighbors’ and acquaintances’ in the house, decreases the potential damage resulting from schools’ bombardment. The teacher, in case of displacement, can carry her educational tools with her and participate in teaching the children of the new area.”

The trainer, Mustafa Jumaa, tells Enab Baladi that the project came as a response for the appeals and demands of the education officials in the northern countryside of Homs, who necessitated the resistance of school dropouts’ phenomenon, pointing out that many organizations have sought to contribute to limiting the negative effects of this crisis, including “Athar” Project.

A specialist, who will be teaching gender studies to the trainees, believes that the project has proposed a new idea and a means to overcome the troubles of going to schools, amidst the lacking educational centers, according to Jumaa, pointing out that the subject he is teaching “shows the functional role of women and men; it is important to shed a light on the matter and how it relates to the educational environment.”

The trainer expects that the project would be a success and that it would have the ability to achieve the planned goals, stressing that “it cannot annihilate the role of schools, but it supplements their role,” wishing that it would be generalized as to cover the whole area.

“Athar” is a charitable civil community organization, interested in training, development, skills building, functioning inside Syria and Turkey, where it has been licensed.