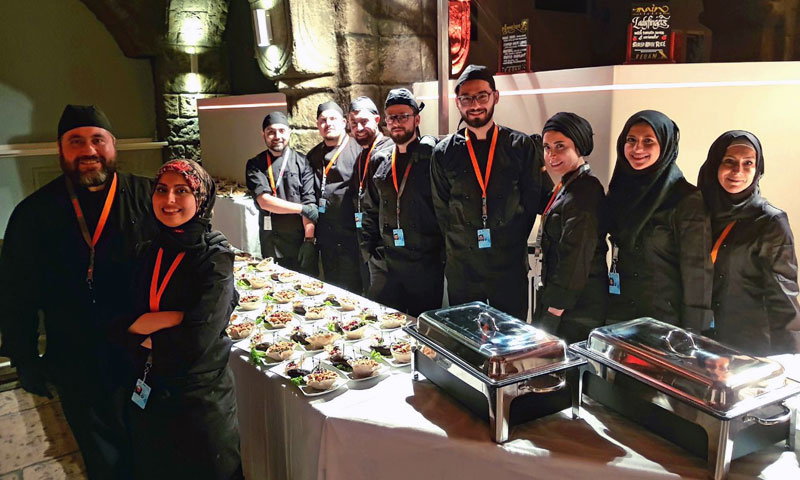 In the suitcase, prepared to escape the war, Syrian people carried their most light and valuable belongings. Women, for their part, held tight to the species, which they could never give up.

Despite the negative implications of the Syrian movement of migration, Europe’s major occupation in the past a few years, including the exhaustion of running from a hellish war, some positive dimensions to the crisis could not be overlooked, such as identifying new cultures and utilizing the experience of the rather open world, as well as introducing Syria and its culture to the universe.

The smell of the things that these women have carried in their suitcases filled the halls of universal kitchens; media outlets, triggered by the smell’s influence, covered and addressed the Syrian cooking hegemony over grand personalities, officials and princes’ tables. Some Syrian women made cooking their own profession, in exile, a thought they never entertained previously in Syria, neither as a study nor as a career.

Syrian cooking helped in integrating Syrian refugees into their new societies, such as the charity “Mazzeh” Restaurant, in Portugal.

About the restaurant, opened in September 2017, Alaa al-Hariri, a holder of a master’s degree in architecture in Portugal and one of the project’s founders, said that the restaurant is charitable and was established in cooperation with the  Portuguese “Khobes b Khobes” (Bread) Association, as a job opportunity for the refugees who performed within its scope, in the shadow of the economic and unemployment crisis suffered by the host community, and which effects are still apparent on the Portuguese themselves.

The project targeted the people whom the war has affected the most, according to al-Hariri, including youth and “housewives,” who do not have a minimum of life experience or a university degree, but own a sufficient credit of professionality in the field which they masterly practiced in their houses.

As for young people, whom war has left with neither education, nor a craft, they discovered, in the project, a distinct opportunity to learn the new language and to integrate within the Portuguese society, in addition to those who acquired a profession that would help them through life.

From Zero to the Summit of Success

The idea behind the restaurant is to integrate Syrian refugees, both those who stand in the line to enter and the Portuguese workers, who consist a small percentage, in comparison with the Syrian majority.

In time, the restaurant became a specific destination for European politicians, for the Portuguese Prime Minister, António Costa, during his visit to the restaurant, on January 30, 2018, stressed that the idea is an “example of success,” assuring that his visit’s goal does not only lie in offering protection to refugees, but also to indicate that “people can continue and find their own way in life.”

The Portuguese restaurant managed to get the first-place prize in a contest organized by the US Embassy in Portugal, for “The Best Project,” in July 2017; according to which, the restaurant received a monetary award that helped in paying the debts that costed the people whom started it.

Amidst the optimism that covers the new beginnings in the host countries, difficulties, sometimes, find their way to the new projects, for a financial crisis has hit the “Mazzeh” Restaurant, at the beginning, and caused a delay in its opening, in addition to the obstacles that obstructed the newcomers ability to communicate with the host community, its language and culture, for the restaurant’s workers did not know neither the language nor the atmosphere.

The Restaurant’s positive reputation inspired a change in the attitudes of some of the Portuguese citizens, who visited the Restaurant, despite their disapproval of the migration influx to their country and offering asylum to the people it received.

Exile is a Distress, So Let Us Cook

Many Syrian women were taken aback by the amount of spare time, which they did not know how to navigate, similar to “Um Hamed,” which became famous among Saudi women, after she opened the “al-Sufra al-Shmaiah” Kitchen (Damascene Table), about three years ago, to find, with it, a tool to bridge the gap of time, left for nothingness, and a means to quench the fire of exile, alienation and separation from family and neighbors in Syria.

“Um Hamed” told Enab Baladi that she managed to stretch her external relations with the Saudi surrounding, reaching a point where she was forced to apologize for being unable to meet their demands, due to the large base of clients she had.

The “Queen of Kitchen” Breaks the Stereotype

In the same time, when the western world was forming a tight connection between Muslim Arabs and terrorism, the refugees played a role in replacing these images, similar to Malakeh Jazmati, the Syrian kitchen’s ambassador to Berlin, who worked hard to establish the image of the Syrian woman, who is both active and capable of integrating into the labor market; she also did her best to transfer this image to the international media outlets, enhancing the image by her arrival to the Administration of  Berlin Film Festival’s kitchen.

The “Queen of Kitchen,” the nickname which her fans have used to call her, found in food a common language that brings all nations around the world together, especially that such projects do not usually require a massive capital. However, Malakeh was shocked by some of the guests’ underestimation of her success, as a refugee who managed to reach the top of the ladder of success, including a “Vouge” Magazine journalist, who was not at all interested in the introductory lecture about her cooking book. Following an interview with her, nevertheless, the magazine assigned six pages to introduce the character called Malakeh Jazmati.

Jazmati did not resort to her Arabic literature degree, nor the one in the field of public relations; rather, she preferred to indulge in the field of cooking to release herself from the State’s social aid given to refugees, to become, according to what she told Enabb Baladi, equal to German people who were supposed to pay work taxes. She also stressed that Syrian women have to work with a double force and effort to prove the positive image.

Jazamti also joined the trail of the most influential women in the German society, in the European Culture Museum, which has been conducted by a woman German researcher to introduce the woman who had the greatest impact on the German community; Malakeh’s picture decorated the museum’s wall for the three months duration of the showcase.

The job that people choose to be through, intensifies not allowing its owners the chance to do anything else besides it, for despite the fact that Jazmati has been in Germany for more than two years now, she could not find enough time to learn German or even see the place where she is living today; she never had the chance to know the German culture and laws, which caused her a number of troubles at the financial level, especially that a slight mistake is enough to turn the investor’s world upside down, who, according to Malakeh, suffers from a suffocating bureaucracy that lies deep within the governmental affairs.

“Um Hamed,” Jazmati and al-Hariri are only examples of dozens of Syrian innovative women around the world, despite the different motives that triggered them to work, have all, through cooking, contributed to spreading a positive image of the Syrian woman and society in the countries of refuge.