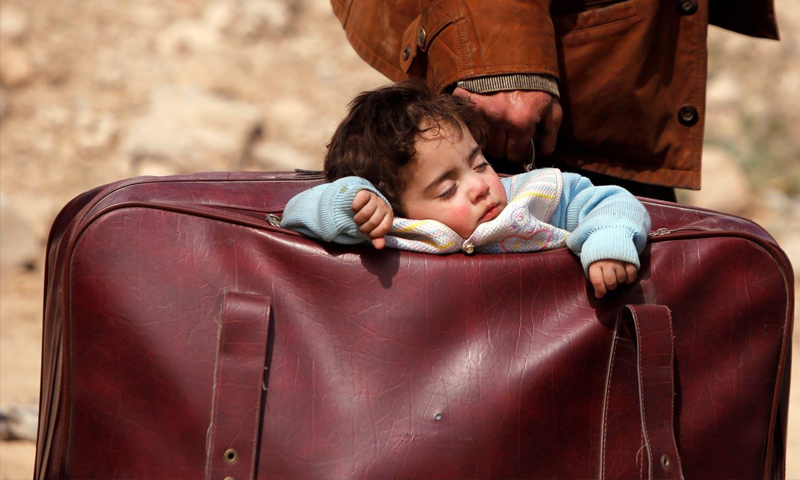 A child sleeping in his dad’s suitcase while leaving Eastern Ghouta towards the areas under the Syrian regime – March. 14.2018 (Reuters) 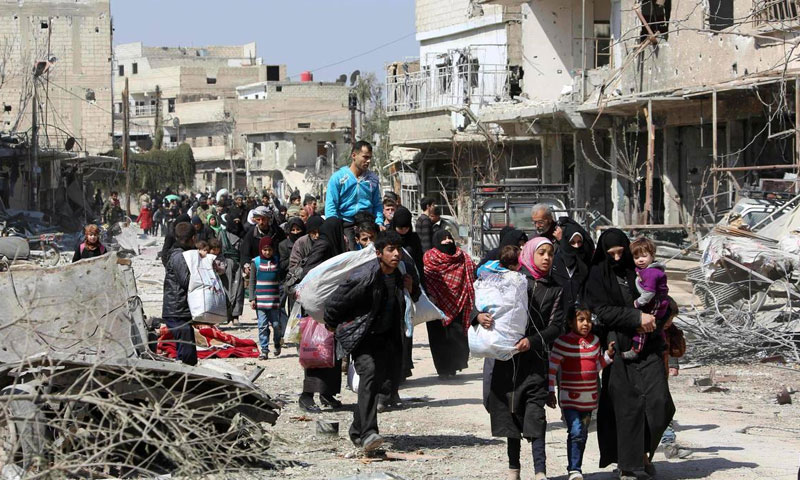 The scene of the internal displacement from Eastern Ghouta captures the civilians’ “disappointment” by the international community on the one hand and the factional formula that has been running the area for five years on the other hand. The videos, which put to images, the moment of their exile from their towns and cities, were indeed more cruel than the images of the dead and the injured people, who fell in the period of the past months due to Assad’s forces military operations.

Russia has, possibly, succeeded in applying Aleppo’s scenario on Ghouta; however, it added more edge to the original approach, for no city have witnessed such a displacement influx before in the history of the Syrian revolution; civilians were forced to walk towards the areas under the regime, after the collapse and the unexpected retreat of the factions that corresponded to the intense violent Assad’s attack on the middle sector.

The town of Hamouriyah headed the process of displacement; it was the first area from which thousand of people have exited through the crossings which the Syrian regime opened. The sudden departure followed a massive shelling with all types of weapons, accompanied by Assad’s forces ground attacks, through which they managed to penetrate deep into the town and the areas surrounding it, after the withdrawal of “al-Rahman Legion.”

The division, the parceling operation, was not new to the area, for the internal factional confrontations have previously promoted the lately implemented idea. Checkpoints were already spread at the borders between the areas under the two parties, “al-Rahman Legion” and “Jaysh al-Islam,” and played a critical rule in defining the separate borders of each faction, which widened the chasm within Ghouta’s internal community.

As if the military split was not enough, as it reached the area’s representative media; each of the factions adopted a media outlet to voice its messages in the area it controlled. The factional-based state of media inflated, reaching the latest generalization by “al-Rahaman Legion,” which prohibited publishing field and military news, unless it ordered so. This monopoly over media field scared civilians, especially that many fronts have underwent a retreat that were mentioned only in the pro-regime media outlets.

It was a massive withdrawal that the opposition fronts had witnessed, which, in less than a month, cost the factions 70% of the geographical space they were previously controlling. In sync, the international community failed to reach a resolution to cease fire and obstruct the Assad’s forces progress and the regional State’s declarations were “blank,” if compared to Russia’s insistence on continuing military operations and compelling the factions to take heir seat at the discussions’ tables to decide their own fate in the area.

All that is mentioned above indulged the civilians in a state of “despair,” according to Enab Baladi’s reporter, who pointed out that the same moral state was applicable to the military factions’ members as well, which was urged by the fragmentation of the military efforts, to be enhanced  with the pressure imposed by the civilians, seeking to reach a solution and to alienate their destiny from the military resolution.

Since the 20th of last February, negotiations had hegemony over Eastern Ghouta’s fate, in addition to the ground movements. The talks, nevertheless, were two sided ـــ the first took place between the military factions and the Russians and the second were conducted between civilians, Russia and the Syrian regime.

After refusing the negotiations with the Russian side, the military factions functioning in Ghouta announced, in a shared statement, their readiness to directly negotiate with Russia in Geneva, but under the auspice of the United Nations (UN), to implement the provisions of the last issued resolution, “2401.”

The factions stressed their ultimate refusal of “enforced displacement and demographic change,” and stressed the need to offer guarantees about admitting humanitarian aid to the area.

This step was preceded by civil committees’ negotiations. Informed sources told Enab Baladi that these committees have separately conducted talks with the Syrian regime and Russia on behalf of the towns of Hamouriyah, Madira and Beit Sawa. Civilians and local distinct figures formed the committees, amidst the factions’ official abstinence from unfolding details about the negotiations they have been leading.

The Russian side has confirmed that the negotiations were still going on, and a statement by the Russian Ministry of Defense, on March.17. 2018, indicated that Russia is fully meeting all its obligations under the Security Council’s “2401” resolution, in relation to cease fire and that the “Reconciliation Center” in Syria is actively negotiating with the military factions’ leaders.

“Within the frame of implementing the Security Council’s 2401 resolution, Russia is still fully committed to its obligations, and the Russian Reconciliation Center is organizing an interactive negotiations operation with leaders of the Syrian opposition,” the Ministry said.

Four Crossings Opened by the Regime in Ghouta

Prior to Russia’s announcement of the camp as a humanitarian crossing for people, the Camp was a forbidden area in Ghouta, for civilians were not allowed access to it and it was restricted to be a passage for the trade convoys, entering the besieged area through the intermediary of merchants.

The Camp is administratively affiliated to Duma district, forming a bridge that connects the opposition-held areas with the areas under the regime in Damascus.

Lately, about 300 families exited through the crossing, following an agreement between “Jaysh al-Islam” and Russia via a UN intermediary, as to allow the departure of people with urgent medical situations from Ghouta; the ability to depart was confined to the city of Duma, for the regime succeeded in separating the middle sector from the city.

With the continuation of battles in the village of Aftaris, Assad’s forces have announced opening a second crossing in Jisreen, in Jiser al-Ghaida area, linked with the town of al-Malihah as an exit for civilians. Nevertheless, the crossing witnessed no departures and not a single civilian has exited the area, which the regime has attributed to the faction that did not allow the civilians to leave the areas under their control.

Assad’s forces managed to separate the city of Harasta from both Duma and the middle sector, after they connected, under their rule, the eastern part of Harasta with the Vehicles Management Base (VMB) and blocked the Duma-Harasta road with arms, before they were able to control it.

Correspondingly, Assad’s forces opened a third crossing in the area, close to the Damascus-Homs International Highway, in the “Water Resources” Foundation in Harasta; the “Syrian Arab News Agency” (SANA) announced, in relation to this crossing, the departure of about 100 civilians at least, on Saturday, March. 17.

With Assad’s forces arrival at the entrance to eastern Hamouriyah, they announced the opening of the fourth crossing in the area, from which thousands of civilians pour out from the middle sector, towards the safe crossing opened under a Russian auspice.

The crossing is located close to “al-Ahlam” for Food Productions Factory, east to Hamouriyah, in the middle of Ghouta.

According to the Russian Ministry of Defense’s statement, the number of civilians who exited through the crossing reached 22 thousand persons, whom the regime has transported to the Doueir camps, near Adraa in Rural Damascus.

Enab Baladi’s sources informed that the camp failed to accommodate thousands of the arriving citizens, for it is prepared to incubate six thousand people only, which forced the regime to place the people in the schools of Adraa al-Balad and Adraa city, 25 kilometers away from the capital, Damascus.

Hundreds of the people are stuck in the area’s close to the buses that transported them, for their legal situation has to be “reconciled” before allowing them to settle down, according to the sources.

It was not the Doueir only, for other hundreds of civilians were taken by the regime to the Harjaleh camps, in the western countryside of Damascus, near the city of al-Kiswah, which is a small town with a population of no more than 10 thousand residents, according to official numbers. 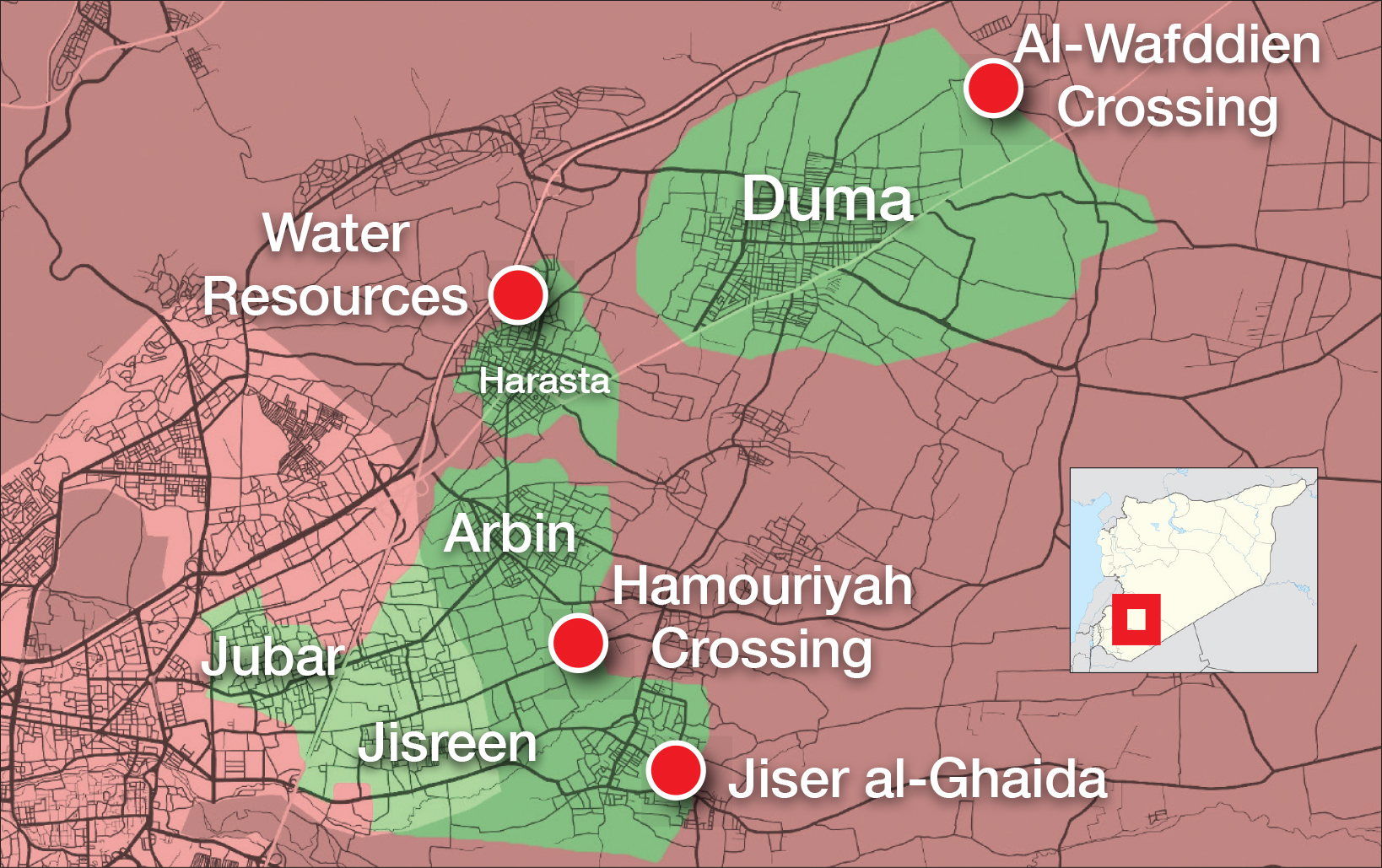 A map explaining the military control in eastern Ghouta and the locations of the crossings in the regime and the opposition areas – March 17.2018 (Livemap)