In Rural Hama and Idlib, Displaced Children are Threatened by Ignorance 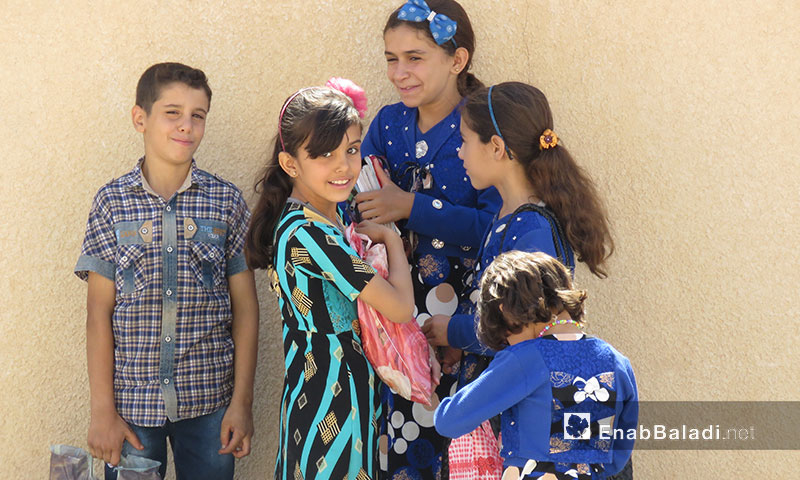 Students return to schools after a relative stability in the liberated areas in Hama – Oct.3.2017 (Enab Baladi)

The children’s dropping out from schools in the villages and towns of the northern countryside of Hama and the southern countryside of Idlib and their inability to continue their education contributed to the prevalence of ignorance and illiteracy among them.

In the past a few years, the area’s villages and towns suffered from constant shelling by Russian and Syrian aircraft; the bombardment intensified, towards the end of the last year, during the Assad’s forces’ campaign against the area, which resulted in the destruction of a number of schools and a marked increase in the number of the displaced people.

Ahmad al-Akram, displaced from al-Ghab Plain to the southern countryside of Idlib, told Enab Baladi his own story of pain, one among many similar tales, saying that his children, nine in number, have forsaken education due to repetitive displacement. Zakaraya Khaled, a father of seven, said that one of his children is 19 years old and does not know how to read or write.

Leaving Schools without a Sufficient Education

The Director of “Free Hama Education Directorate,” Ahmad Hakoush, told Enab Baladi, that many reasons led to the prevalence of ignorance, including the children’s dropout from schools before reaching developed stages, continuance displacement, lack of stability and many children’s need to work as to support their families, due to the absence of the breadwinner, as a result of death, detention or disability.

What also played a role in enhancing the phenomenon of illiteracy was the missing control over schools, for they are still enduring under the Syrian regime’s supervision in the area; the schools are offering the students the regime designed curricula, with the expectation of a single subject called ‘Nationalism,’ and the teachers, in these schools, are receiving their salaries from the regime’s Ministry of Education. Illiteracy is deepened also by the deteriorating quality of the education offered at these schools, lack of specialized staffs, funding and instable payments. These factors, collected, led the Directorate in Hama, last December, to launch a cry for help, in which it warned of the risk of the cession of the educational operation and the dropout of 13 thousand children from its schools.

For his part, the supervisor of the schools, under “Majd al-Sham Charity” Organization, Abdul Baset al-Younes, did not disguise the effect of displacement and the absence of experts and the internally displaced people’s deteriorating financial conditions on children’s abandonment of schools, adding that the students’ parents’ lack of awareness and “their focus on the necessity to provide materialistic basic life’s needs at the expense of education,” also played a role in enhancing the educational tragedy in the area.

Al-Younes explained to Enab Baladi that ignorance would lead to negative effects in the upcoming years, “for the current generation will be intellectually devastated, in the future, and a victim for bleak, extremist and pervert ideas,” in addition to social and family problems.

At the same time, Hakoush stressed the fact that ignorance would increase the ratios of unemployment, illiteracy and abundance of workers, as well as inflation in the lack of experts, in addition to the deterioration of social awareness and the spread of bad habits in society.

A number of the area’s foundations paid efforts to launch campaigns, with a specific focus on the most prominent solutions to overcome the addressed phenomenon, including “Youth for Change” which organized “I Am the Future” Campaign, last December, to raise awareness and rehabilitate preparatory and high school drop outs and integrate them in the educational process once more.

Hakoush believes that the solution, to terminate the ignorance phenomenon, lies in conducting control, censorship, on the schools and securing the salaries of the teachers who work in the “Free Education Directorate,” in addition to providing livelihood for orphans and the children of detainees, patients and injured people, as to protect them from the need to work and spreading awareness campaigns by the different entities to challenge the phenomenon.

Potential solutions, according to al-Younes, lie in supporting teaching as a profession and teachers as practitioners at schools, as well as keeping the skilled people and preserving the remaining schools and restoring the destroyed ones, in addition to building new ones in the residential areas, providing books and stationery for students to alleviate a part of the financial burden that weighed parents down.

He also stressed the importance of moral and awareness-based support to counter the phenomenon, through conducting lectures and sessions to address the issue of ignorance and try to find suitable solutions, in addition to the necessity for communicating with the students’ parents via the local councils to raise their awareness about the risks of ignorance in the upcoming phases.