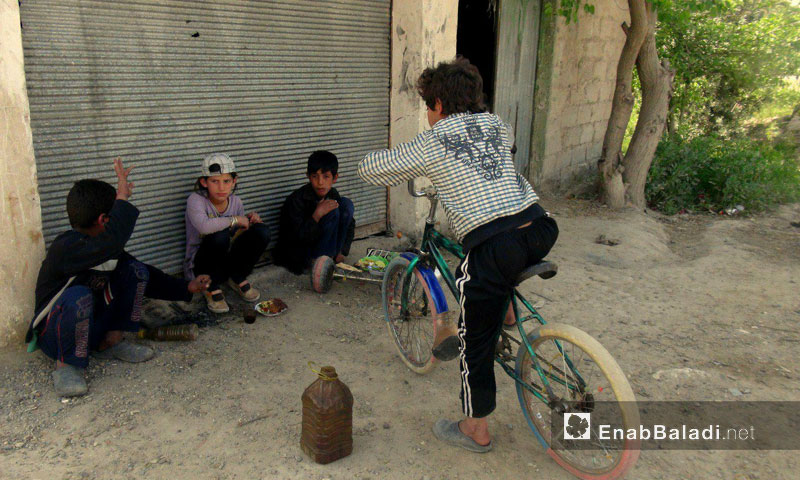 Saad, the eight years old child, was overjoyed upon seeing the Christmas tree after his mother has decorated it with simple tools, using dry branches and “LED” lights. She placed the tree in the living room of their house in Deir ez-Zor, in a scene that fails to hide that the city’s culture and traditions are dying under the weight of “two extremist groups.”

“Let us be happy. For years, we have been stuck in hunger, worries and misery,” Saad’s mother, called Aum Qasem (39 years), told Enab Baladi. While Saad could not hide his glee over the tree and the new clothes, his brother Rami, five years older, did not hide his resentment over decorating the tree; he believes that such a celebration “is alien to society and it is not the time for it.”

The clashing opinions of this household’s members reflect the scene in the city of Deir ez-Zor, which in the past a few months, have finally released itself of the “Islamic State” (IS) Organization’s impact, to only lay under the control of the “Syrian Democratic Forces” (SDF) and militias, who vary in their affiliations. Due to this, the City was shifted from one extremist group to another, according to Saad’s father(41 years).

Abu Qasim, a father of four, the oldest of which is Rami (16 years), said that “the city was not like this a few years ago,” remembering the names of his Christian friends and neighbours, who coexisted and enjoyed celebrating together.

There were five churches in Deir ez-Zor that embraced Armenians when they first came to Syria at the onset of the last century, as Abu Qasim has explained. “Though the situation changed a lot in the nineties of the last century, the majority of the people were tolerant; they accepted people’s differences and orientations.”

According to Abu Qasim, children are the manifestation of the damage that befell the area in the past a few years, attributing that to “the dangerous ideas that “IS” had seeded, which are today growing with other transformations that accompany doctrinal and Shiite songs”. He expresses concern about the idea “that his children and their peers might harvest the dark ideas that have been planted in this soil.”

No Festivities or Celebrations…

There are no Christmases or celebrations in Deir ez-Zor, the city that is busy to cure the wounds of war and destruction, according to Abu Qasim, who mentioned that people grow careless to festivities. Celebrations are limited to a few homes and markets in the neighbourhood’s of “al-Jura and al-kousor;” there, the shop owners had decorated the shelves, which presented new commodities, with lights.

Abu Qasim attributed the missing festivities to the exhaustion that followed the siege and the degenerate financial situation of most of the city’s residents these days. He confirmed that some Christian people have already returned to their destroyed houses and churches, after Assad’s forces have controlled the city, early in November 2017.

Abu Ali, (49 years), owns a shop and teaches in one of the city’s schools, believes that the problems which accumulated in the past a few years in Deir ez-Zor’s community “need decades to be cleared off.”  He pointed out that “a whole generation coexisted with extremism and absorbed its ideas. A long time is needed to erase its repercussions.”

The teacher describes what he is witnessing in the school and explains that “a sufficient percentage of the six grade and high school students still has admiration for the Islamic State Organization refusing to call it Daesh and repeating its songs secretly.”

Abu Ali explains this as “a possible reaction to the bitter reality they are living.” He pointed out that “the Assad’s forces and ally militias’ conduct is triggering everyone to resist the attempts to erase the city’s Sunni identity and culture, including children and adolescents, some of whom have turned to listening to Shiite songs and latmiyat.”

Most of these youngsters do not have “cultural resistance” tools, to hold on to, but the “Islamic State” Organization, according to the teacher, especially that he has encountered a segment of students “who live in a society and environment under the regime and its militias, without responding to its humiliating assaults.”

Abu Ali is afraid of the growth of the “extremist” ideas among these children. He warned against “the explosion of suppression, especially with the teasing conduct of Assad’s forces and the necessity to avoid the city’s encounter with further extremist organizations whose fuel might be these children.”

“This is a melancholic view,” Aum Mohammad, a former school principal in Deir ez-Zor, calls the situation telling Enab Baladi that it is only natural for children to try to identify strange concepts. “Most of these ideas disappear at the end of adolescence. Most often, these ideas do not have an effect on their futures, for fear and vigilance prevent them from declaring and or practicing these ideas.”

Aum Mohammad believes that the countryside of the governorate is “a fertile environment” for such ideas, not the city, pointing out to the connection of “the extremist religious phenomena and some of the groups with clans and rural areas, which is a source of danger being a historical heritage.”

The people, who Enab Baladi interviewed, refused to turn each event in the city into a new point of divergence which come on the top of the other difficulties. Aum Mohammad ends her interview saying that “we are tired of troubles and disputes; all that we need is comfort and peace.”