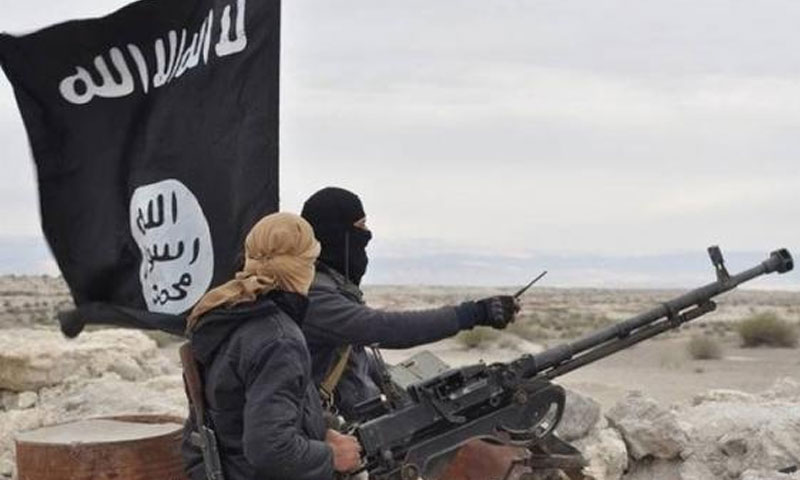 The “Islamic State” (IS) Organization, once more, returns to the forefront of the events in Idlib governorate. This happened three years after it withdrew from the whole region, following a series of military operations triggered by opposition factions and “Jabhat al-Nusra” (Nusra Front) against it in 2014. The last of these operations took place in the two cities of al-Dana and Binnish.

The threat returns with battles, which the remnants of IS initiated against the opposition factions, especially “Hay’at Tahrir al-Sham” (HTS), in Hama’s eastern countryside, in an attempt to penetrate Idlib’s administrative borders.

IS has been totally discreet about the battles in the region; there is not any information about the military operations, unlike its attitude in the other Syrian regions it controls, where there are constant announcements about field progress, via its official agency “Amaq” (Depths).

The organization’s military operations synchronize with Assad’s forces and ally militias’ attempts to break into the eastern countryside of Hama to reach the “strategic” Abu al-Duhur Military Airbase, the point that Turkey and Russi are racing to have.

Geography Is Helping the Organization

Media sources in the region told Enab Baladi, that IS’ remnants are advancing in Hama’s eastern countryside and have reached the outskirts of Hawayiz, Ibn Hadib, Hawayiz Umm Jurn, Hawayiz Mountain which touch Idlib’s administrative borders.

Several questions have been raised about the reasons for the Organization’s progress despite the large military arsenal of the opposition factions in the region, especially “Hay’at Tahrir al-Sham”, which has a significant military weight.

In an interview with Enab Baladi, Emad Eddin Mujahid, HTS’ director of media affairs, said: “The battles in Badia (Syrian desert) are fierce for the geography of the land is allowing both our and their military forces to advance at a fast rate.”

According to Mujahid, the military action in the region manifests in going through large areas in Badia without breaking into towns, through going around some of them, considering this as “the strategy that the [fighters] are resorting to there, as well as IS.”

For IS and the Syrian regime, according to Mujahid, the goal is “to expand in the Badia and manoeuvre to reach military points, through which they can fix forces, such as mountains and hells. ”

Upon asking him about the towns which are under IS’ control, Mujahid confirmed that there are attack and retreat battles. “The battles are persistent. IS is becoming more violent because it has nowhere to retreat to and nothing to lose, in the shadow of the high numbers of casualties within its members,” he pointed out.

Internal Cells Participate in the Confrontations

In the context of the “Islamic State” Organization’s threats against Idlib governorate, cells affiliated to the organization, inside the governorate, also appeared in the forefront. “HTS” announced that it will confront these cells because they intend to support IS’ military operations from outside the governorate’s administrative border.

A report, published by “Ebaa” News Agency which is affiliated to “HTS,” early December, said: “Hay’at Tahrir al-Sham” has confronted security cells affiliated to “IS” in the liberated north and ambushed them.

It quoted the military leader, “Osama al-Shami,” as saying that “a group [under IS] tried to sneak into HTS points in the Hawayiz Umm Jurn in Hama’s eastern countryside to support other [IS trapped groups]. After discovering the groups, clashes between the two parties took place and ended by defeating [the outsiders], who were forced to escape.”

Al-Shami explained, “[HTS’ fighters] have prepared ambushes for the remnants of al-Baghdadi’s gangs. The ambushes killed 15 members, and another member was captured in Sinjar in southern Idlib. In addition to this, two pick-up cars have been seized.”

Mohammed Radwan Qashash, the member who was captured by “Tahrir al-Sham” during the mentioned military operation, said: “For a week, the group gathered in a camp in one of rural Idlib’s towns aiming to go to the IS’ territory in Hama’s eastern countryside to support the Organization. While we were taken there, we clashed with HTS’ fighters in Hawayiz Umm Jurn town.”