Syrian Women in the Vicious Circle of Violence 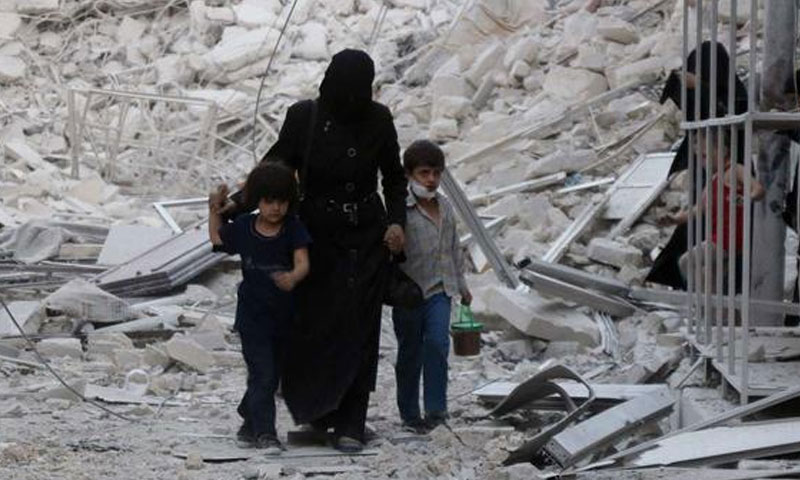 What should I tell you?

“They raped my daughter before letting her out of the prison.

They have raped the whole country. We are all raped. My daughter was not ashamed of what happened to her; she is still beautiful, she is recovering and gaining her spirits back. She is still the same, full of life and hope.

“One day in 2012, I drove my car full of medical supplies, blood bags, blankets and children’s medicines to Duma.

I went closer to the checkpoint. I was calm for I am originally from the area and a minority, which meant that my car would not be searched. At the checkpoint, my car’s door was opened and strong hands stretched and grabbed me by the hair and stuffed my head into a black bag. They took me out of the car; put cuffs on my rests and pushed me into another car. The whole thing took one minute and a half. There was no soldier left at the checkpoint, who did not touch me or insult me. “

In the past seven years, the Syrian woman has been and is still being exposed to endless violations.

Violations against women take different forms, including death due to shelling and battles, arbitrary detention, death in detention centers, enforced disappearance, torture, rape, being taken as a hostage or a human shield.

This is how, Sima Nassar, the programs’ official in “Ur Nmo Human Rights Organization,” involved in the documentation of violations against detainees, especially women. She added that, in the past, a few years, the risk of mines, displacement, enforced displacement, electronic violence and the like has remarkably increased.

The expansion of conflict to large geographical areas and the long period of fighting, as well as the formation of various armed factions, created a suitable context for violence against women, including sexual violence.

Sima Nassar said that, during the war, intentional abuse against women was used by the different conflicting parties to overpower and vanquish opponents in a symbolic and psychological manner. This strategy turned women into a desirable target; accordingly, they became the weakest social segment despite the changes in power balance and authorities in control.

It Is Difficult to Enumerate Incidents of Violence against Women

Such an aim is made complicated by many reasons, including the fact that the sound of fighting overcomes all other sounds.  There are statistics about female victims, however, there are not any about the women who got blackmailed while trying to get a piece of information about a forcibly disappeared husband, son or brother.

It is also impossible to know the number of the times through which young women have been harassed at the checkpoints ruling their neighborhoods in the areas under the Syrian regime or the number of the women who decided not to leave their houses due to dress code and movement restrictions imposed on them in the regions under extremist groups.

Violence against women in the camps, inside Syria and in the host countries, is intentionally kept hidden.

Nassar attributes these difficulties and secrecy to challenges that are directly related to the social and cultural Syrian context and violence documentation methods which are based on social patterns and sexual violence. Families are always hesitant to report the abduction and detention of women. It is also difficult to make interviews with the victims for most of these women refuse to speak, especially if their abuse has a sexual dimension.

The difficulties mentioned above are packed with additional challenges which include difficult security conditions and the lack of trust in the importance and the benefit of documenting violations, as well as the absence of needed experience and resources among Syrian human rights advocates.

Syrian women are victimized twice. The first time results from the abuse itself. The second relates to the idea that they have to bear the silence surrounding the abuse, accompanied by the bitterness which erupts from the abuser’s ability to escape penalty and the burden of the resulting social pressure.

Statistics about Violence against Syrian Women

In the Sheet, “Facts about Violence Against Women,” issued by Syrian organizations including, Ur Nmo, Syrian League for Citizenship, Syrian Network for Human Rights, Violation Documentation Center in Syria, Syrian Center for Statistics and Research, and Attorney Daed Musa, in cooperation with  EuroMed Rights, contains statistics about the number of the Syrian women detainees since March 2011 to November 2017.

The “Syrian Network for Human Rights” documented the detention of 8289 women who are still imprisoned by the Syrian security throughout Syria.  Out of this number, at least 599 are girls who are not yet 18 years old. No less than 107 women were arrested with their children, and about 57 women died in detention due to torture.

The report states that there is no information about the whereabouts of 3149 women and that 109 women and 14 girls, under 18, died.

“Violation Documentation Center in Syria” documented the detention of 2271 women and 111 girls and the death of 139 women due to torture, kidnapping, forced disappearance, as well as the death of 15 girls for the same reasons.

The issued Sheet confirms the difficulty of knowing the accurate number of detainees for the Syrian regime does not give independent observers an access to detention centers.

“A Society’s Shattered Half”

The “Syrian Network for Human Rights” issued a report titled “The Syrian Woman…. A Society’s Shattered Half”, on the International Day for the Elimination of Violence against Women. In the report, the Network documented the most prominent violations against Syrian women on the part of the involved parties in the Syrian conflict since March 2011.

The report documented the death of at least 24,746 women by the parties to the Syrian conflict until November 2017. The total number is divided as follows:  13,344 adult female and 11,402  female girls.

The report confirms that all the conflicting parties have committed serious violations against Syrian women, but the Syrian regime deliberately and systematically committed the largest number of these violations.

The Syrian Constitution Did Not Bann Discrimination against Women

Sabah Hallak, a researcher and a member of board of Syrian Women Association (SWA) told Enab Baladi about “The Facts About Violence Against Women” sheet which has been issued on the International Day for the Elimination of Violence Against Women, 25 November, which will last 15 days until 10 December,  which is the Human Rights Day.

Hallak declared that the Sheet focuses on violence in a legal manner. She pointed out that the General Syrian Constitution of 2012, did not provide for equality between women and men, nor does it prohibit discrimination against women, nor criminalize violence against women. She also mentioned that the Personal Status laws which govern Syrian families are subject to Shari’a, the body of laws based on Islamic teachings and rulings, the reason why violence between men and women is still legal in the State’s laws and constitution.

Hallak pointed out that the Sheet has dealt with violence under armed conflicts and Syrian women positioning in the conflict. The Sheet covers cases from most of the Syrian cities and cases with different political orientations.

The Sheet also made recommendations to international bodies, such as the European Union and the Syrian regime. There was an agreement that Syrian women should have a similar treatment to citizens, they should have the same duties and rights.

The Sheet also stressed the importance of women’s participation in the process of peace-building and sustenance through their presence around the political solution’s discussion table, or as gender advisors, or in the social community in the Chamber of the Advisory Board. The Sheet insists that women should participate in the transitional phase from A to Z to guarantee their rights and protection as women.

In relation to the places where women can go in case they were subjected to any form of violence, Hallak pointed out that the degree of effectiveness of women’s rights organizations differs according to regions.

In Damascus, there are three centers for the protection of battered women: “The Good Shepherd,” “Al-Mahabe” (Love), and “Wahat al’amal” (Oasis of Hope).

These centers host battered women from the different governorates in Syria; they receive women belonging to different age stages, political backgrounds and no matter who the source of violence is, let it be a family or conflicting parties. However, when the source is a governmental one, the center often does not address the issue due to political sensitivity and fearing a new revengeful operation. These centers offer women a shelter and legal advice.

Hallak pointed out that, in Lebanon, there is a cooperation concerning the issue between KAFA (Enough) and Abaad (Dimensions) organizations, as well as the United Nations Human Rights Office of the High Commissioner (OHCHR). There are also Syrian organizations which provide psychological support and protection.

All Syrian women residing in Lebanon are subject to the Law “Protecting Women from Violence” and are entitled to resort to security or to any organization to provide them with such services.

Sima Nassar, the programs’ official in “Ur Nmo” organization, while speaking about the protection centers for battered women, said that “unfortunately, we lack protection methods before and after the violation.”

She pointed out that one of the suggestions available if the woman is subjected to family or other forms of violence is to contact the line of trust for the victims of domestic violence, displaced and afflicted people (0119219),  which is a free line run by a group of lawyers in Damascus to help the woman inside Syria and to provide advice to women abroad about their legal matters .

In the neighboring countries, there are some civil society organizations concerned with the protection of women.

According to Nassar, however, the abused woman is often unable to reach service providers, even if they are available, because she does not know that such services exist or due to fear of stigma and revenge.

The International Day for the Elimination of Violence against Women

On the 25th of November, the world celebrates The International Day for the Elimination of Violence against Women, which was adopted by the United Nations since 1999.

Violence against women is a violation of human rights of which more than 70% of the world’s women suffer, resulting in legal and practical discrimination against women. It reflects the persistence of gender inequalities and is one of the world’s largest human rights violations because it transcends boundaries, race, wealth, culture and geography, occurring everywhere in the home or at work, in the streets or in schools.