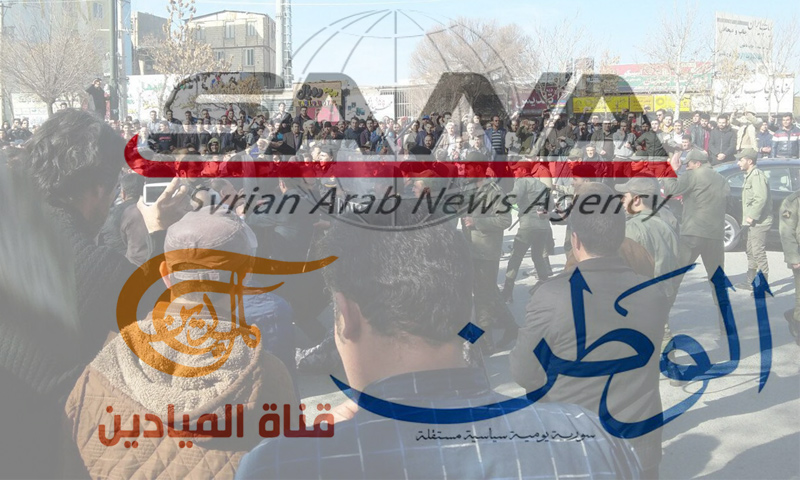 The Syrian official media and close to official reproduce the media coverage of the Syrian peaceful movement against Assad’s Regime in 2011. However, ironically enough, in Iran this time.

Covering the popular protests against the country’s government shaking the Iranian cities, today in December 30, the Syrian official media presented the action as a cosmic conspiracy and turned the anti-government demonstrations into pro-government ones.

A number of Iranian cities have witnessed a series of demonstrations. Starting on Thursday, the people protested the living and economic deteriorating conditions. In the demonstrations, the protestors shouted against the regime and denounced Iran’s regional interventions which impoverished them, especially interventions in Syria, Lebanon and Yemen.

The Iranian Government media admitted that the protestors demanded a betterment of their living conditions. Nevertheless, it stated that the demonstrations which broke out to protest against the rising prices were exploited by a segment of people, who carried anti-government slogans.

The religious authorities in the Islamic Republic of Iran called for the security forces to take suppressive actions against the protestors, including Khamenei’s representative in Mashhad, the second largest city in Iran.

The Syrian Arab News Agency (SANA) did not acknowledge the protests turning them into “million-man” marches refusing the foreign interventions in Iran’s affairs in support of the Iranian leadership.

“Al-Mayadeen” channel, close to the Shiite axis, in its coverage, said that Tehran’s mass demonstrations came as a refusal of the foreign intervention attempts in the country’s affairs. It quoted Iranian officials as saying that Tehran is facing a “fierce” attack by the “enemy” upon all that is holy to us.

As for the US-led cosmic conspiracy, it was the share of the pro-Syrian regime newspaper “al-Watan,” for it quoted warnings against conspiracies and attempts targeting the people of Iran through promoting division and spreading “shameless” lies and pointed out to American and Saudi attempts at “subversion” in Iran.

This style does not actually differ from that followed by the Syrian government media during the peaceful demonstrations in Syria in 2011 when the regime said that they were pro-government marches which triggered the protestors to raise the green flag or the one recognized as the “revolution flag” to combat these allegations. After that, the media plots varied and included the ones that said that the protestors were thanking God for the blessing of rain.

However, the Syrian official media was forced to admit the anti-government protests relating them to foreign parties. It described the protestors as a group of “mercenaries” who are given money to buy “Falafel” sandwiches in return for condemning the regime. This plot came in the context of the cosmic conspiracy targeting the “Axis of Resistance” in the east, which Syria, Iran and the Lebanese party “Hezbollah” represent.