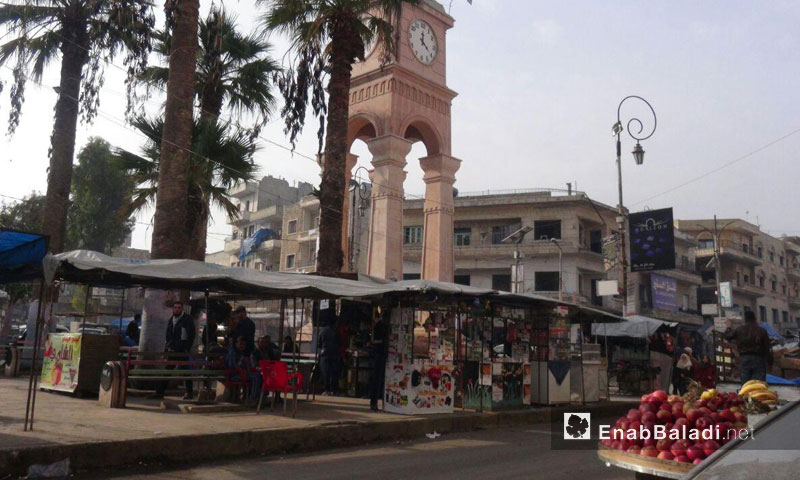 “Instead of roaming the streets and asking people for my food, I constructed this shop to sell things and make a living,” says Abu Mohammad, who has been displaced from the city of Darayya in the west of Damascus to now live in the city of Idlib.

In the past a few weeks, the pavements of Idlib city witnessed an increase in the process of random construction, especially that the city became an incubator for a massive number of displaced people from different Syrian governorates. The new phenomenon is receiving mixed reactions; some people are criticising it on the ground that it is distorting the city’s appearance, and others are calling to leave these people alone “because they are making a living out of these shops.”

In an interview with Enab Baladi, Abu Mohammad, who arrived in Idlib with his family after being displaced in August, says “poverty has forced me and other people to undertake an illegal step, but I have nothing else to do. I sold all that is left of my wife’s golden belongings, and, today, I am selling whatever I can to make a living for my family.”

Taxes Are Imposed on Shops

With the beginning of winter, some of the shop owners tried to obtain licenses to build small shops on the pavements, instead of the wagons they used to present what they have for sale.

The young man Ammer, displaced from al-Khalidiya neighborhood in Homs, says that he suffered the last year because his work was repeatedly interrupted by cold and rain, “I was out of my mind; I did not know where from I could get bread. So, I got a few bricks and constructed a small shop beside my house.”

Ammer is paying the Municipality 5000 Syrian pounds every month, considering it a small sum if compared with what the owners of larger shops are paying, a 100 thousand Syrian pounds according to his estimates.

The Municipality Blinks at the Shops

Nabil Kurdi, the Head of Idlib’s Municipality affiliated to the “Syrian Salvation Government,” says that with the recent prevalence of the phenomenon, the Municipality had nothing to do but to allow for such violations “due to the lack of income sources in Idlib.” He stressed that “the issue has gone beyond the limit with the stalls invasion of the streets.”

Heading to Idlib’s Clock Tower, in the city center, you can see dozens of random shops in its surrounding. Kurdi explained to Enab Baladi that the Municipality has made a decision to limit the phenomenon “in a manner agreeable to both passers-by and shop owners.”

According to the Head of the Municipality, shop owners who present their commodities on the pavements and the streets have received ads that threaten violators with penalties starting from the 24th of December.

He points out that the Municipality “would construct a marginal market for stalls’ owners in each neighborhood to decrease the crowdedness of the central market. However, this step requires support from concerned organizations in the north because our resources are weak and limited.”

Concerning the smaller shops on the pavements, Kurdi assured that the “ones that are not bothering” passers-by and the neighborhood shall stay.

In a field survey, conducted by Enab Baladi, some of the people indicated the necessity to blink at the small shops, including Sawsan, who says that her houses’ street is full of them. She added that “It is crowded and we are forced to walk among cars. However, poverty has penetrated the Syrian people to the bones. Let the people make a living and have a life.”

Abu Mohammad sits, and then starts to walk back and forth. With a husky voice, he promotes for the commodities he is selling on the pavement. He prays that tomorrow he would be able to make a living that supports his family without the need for people’s help.