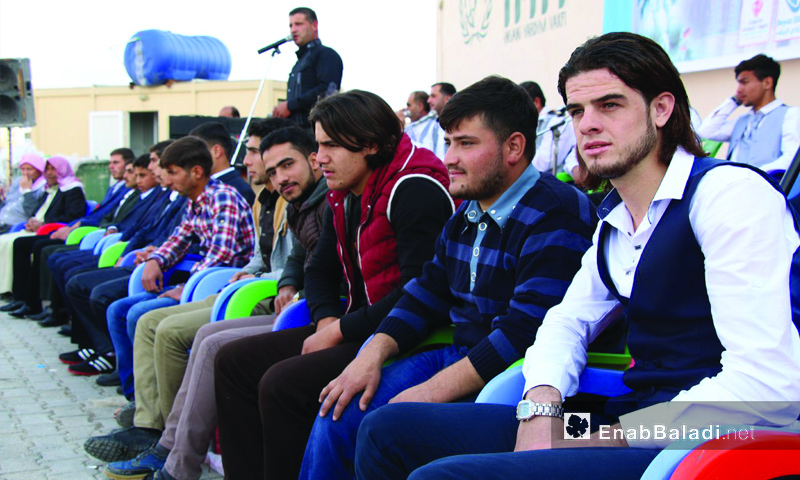 The war in Syria violently curbed the young people’s dreams, men and women, which acknowledged no limits before; it turned their simple wishes in the past, prior to the conflict, into some sort of a phantasy during the conflict. Accordingly, some Syrian families started to accept ideas, which they would not have even thought of seven years ago, including “collective weddings” that became a trend in different parts of Syria, both under the Syrian regime and the opposition.

Scared of ending up as “spinsters,” Syrian young women resisted the fears which haunted them by succumbing and giving up some of the traits of their dream weddings. Instead of being the only princess in the wedding ceremony, each of these young women surrendered to the idea of a collective wedding, where she must share the spotlight with other women. To share was one choice while the other choice was waiting for a prince in a shining armor, who might never appear in the time of war.

As for the prince charming himself, after the revolution, the concept has been largely modified, for the war has stolen both the white horse and the shining armor from Syrian young men; it also broke their magic wands. Many of these young men cannot anymore afford the dream weddings which young women imagine; they do not have enough money to rent a wedding hall. Accordingly, they also succumbed to the idea of collective weddings, which will protect them from expenses and debts that some of them would not be able to cover in many years.

Hussam al-Ahmad’s, pseudo name, engagement went too long. For a year and a half, he postponed the wedding’s date three times. In the last time, his fiancee’s family gave him a warning and asked him to hasten up and organize a wedding ceremony for he went beyond the traditions’ of engagement, which should not be that long. Ahmad’s deteriorating financial situation and the pressure placed upon him by his parents in law forced him to join in a collective wedding organized in Idlib governorate.

His parents’ in law faced Hussam’s decision with total refusal for they also were torn out: They refused that their daughter would have to share her dream wedding with other women, and they were definite about their daughter’s longing to be married and to be in the same house with Hussam.

Among the others who participated in the same collective wedding that Hussam chose, reluctantly, to be part of, there were families, who shared with the parents’ in law the suffering and the filial relation arising from displacement. These families played the role of intermediary; they tried to convince the family of the bride to accept the idea for most of the young people, these days, cannot afford the expenses of a separate unique wedding.

After a few days of the people’s intervention, days that felt like years for Hussam, his fiancée brought him the happy news of her parents’ approval. The two of them took the step and joined the ceremony, which was conducted with donations from certain entities. These donations covered not only the wedding but also the phase after it because Hussam received some of the marriage needs, which he could not even imagine having due to his financial situation.

Collective weddings do not cost the groom or his family neither money nor effort, as there are donor associations and organizations that tackle this sort of events.

These mass weddings come as a response to the extravagant weddings that some people are organizing during a time of excessive difficulties; they are an attempt to show that there are people who are striving to have a quasi-normal life. Hence, they are rising a flag of awareness to tell young people to keep a humble rhythm and refrain from the glamour of wastefulness, appearances and other wrongful public practices.

The marriage hypothesis, as a faraway dream, has changed in the mentality of the young Syrian generation, especially after the increase in the numbers of collective weddings in Syria. For example, in 2014, the regions under the Syrian Regime’s control witnessed about five collective weddings, the last of which was “During the Best and the Worst,” in which 1000 young men and women, in the governorate of Lattakia, got married.

The collective ceremonies did not only bring families together, but also they integrated the cultural heritage and social traditions of the people who come from different Syrian backgrounds, especially after the prevalence of displacement in the country.

Some of the military faction’s leaders attempt, through organizing similar ceremonies, to encourage fighters to have a normal life. In the opposition-held areas, collective weddings are becoming a trend reaching regions that never acknowledged such events.

Sociologist Mirna al-Hassan told Enab Baladi that the people in Idlib governorate used to put social restrictions on the groom by  forcing him to organize a regular wedding for their surrounding, the  conservative surrounding, would not have accepted the new-fashioned idea before the arrival of the displaced people to the governorate and organizing their wedding in a collective manner.

The Dark Side to Collective Weddings

Some of the young women, the brides, who felt happy during the collective marriage ceremony, developed feelings of regret later on. The wedding was not at all magical, and they were no princesses, especially that many of them are still stuck with a negative set of ideas, such as the desire to have the attendees and the audience’s complete attention and concentration.

A few month from their wedding, while Hussam and his wife were remembering the ceremony, she devastatingly told him that she regrets approving to be part of a collective wedding and that this was an obsession for her. According to Nuha, waiting for years to have her own special wedding would have definitely been better than the need to fight other brides to have people’s attention and admiration.

Some of the entities that organize the collective weddings, especially if they were military factions’ leaders, tend to show life in the shadow of the Syrian crisis as a life in pink. They try to focus on the idea that the fighters are able to have a normal life along with fighting which is a desirable thing that triggers them to continue life and their work as any other human being does, according to the leaders’ point of view.

Fame encouraged some sponsors to adopt these events, either to show dominance and influence or to promote themselves by resorting to different media outlets, inviting them to attend the ceremony and naturally focus on the sponsors themselves.

As for the society, who has a stricter look, it follows the collective weddings’ participants to remind them and warn them against going beyond customs and traditions which oblige them to go for a regular wedding that shows their wealth, even if they were not that wealthy sometimes.

In an interview with Enab Baladi, Tamam Abu al-Khair, one of the organizers of a collective wedding and an activist from Darayya, explained that the idea emerged when a number of to be grooms, who are originally from Darayya, had the desire to get married under similar circumstances of financial lack and deterioration, traits that featured the lives of most Syrian young people.

Tamam made an agreement with other four young men to organize a wedding that contributed to the marriage of 62 young men and offered them financial support that would cover their needs for about four months or more after the wedding, according to him.

According to the activist, the idea of collective weddings is a recent one in the society of northern Syria. However, with the new activities that these weddings introduced to the usual ceremony, the people in Idlib welcomed and embraced the new trend and cooperated with the organizers to guarantee its success.

Despite the fact that the wedding was a success that received the community’s blessings, Tamam would not like to repeat it. He thinks that collective weddings would start to be described as “consumed” if they were to be repeated, and he proposes to break the idea’s rhythm by establishing a marriage association to help each young man separately.

The collective wedding was not a pure happy event for it was faced with certain difficulties; some of the sponsors demanded that their logo should be presented in a marked way during the ceremony, and others denounced the fact that their promotional posters were not presented in the way they desired.

An Expert Complements the Prevalence of the Phenomenon

According to Mahmoud Osman, a sociology expert, the presence of local community organizations is one of the factors that led to conducting collective weddings for, in one way or another, they want to help individuals, and so they chose to sponsor the collective wedding as a part of their initiative.

About the collective weddings’ effects, the expert said that these ceremonies are positive ones. First, they are a space where people can cooperate and support each other. Secondly, they are happiness incentive events for they help people gather and meet in a single place. He says human beings when alone, naturally, do not eat the same amount of food as when they have other people around them. So, think about the pleasure of a collective wedding.

According to the expert Mahmoud, the advantages of the collective wedding will definitely overcome the disadvantages where people start developing negative feelings about the idea that someone has interfered in the organization of the most important day of their life or that they do not know many of the people who attended their wedding. He said that the ceremony itself would not get the same reaction from all the people.

As for the individualist effects, the expert assured that it is impossible to make  a generalization about the influence which the wedding had on the wedded couples, for this influence, first of all, depends on the individual and his or her conditions: the reaction of the people who were forced to participate in the wedding are definitely, not similar to those of the people who joined in a long waited for ceremony, this led to despair and regret in some cases and joy and gratitude in other cases.

It is important to mention that the impact of a collective wedding on a woman is much deeper than that on a man, for weddings for women are related to the desired attention and the appearances which the eyes of the attendees are supposed to reflect.

Hussam could not allow sadness to take advantage of his wife’s heart, so he promised her of a wedding, a wedding for her alone, one that will combine in its folds two kinds of happiness, the first is the joy over their separate wedding and the other is the joy over the country’s resurrection of its pain, which Hussam prays to be soon.