The Lack of Funding and Volunteering Threatens Schools in Hama 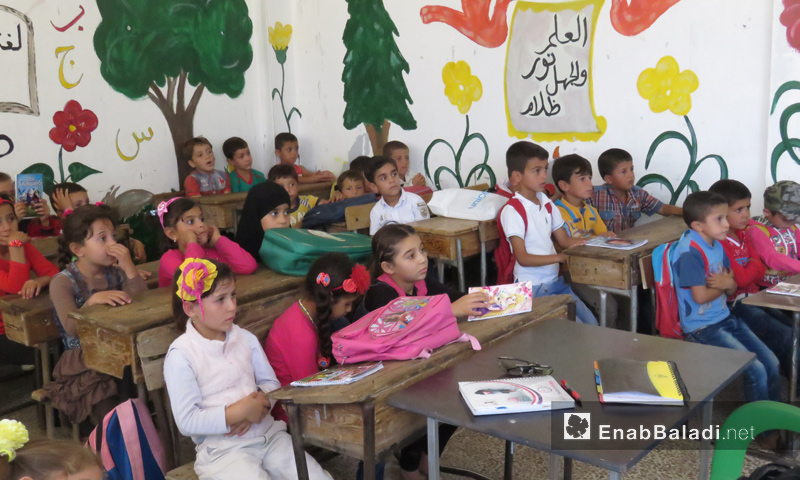 Through its Facebook page, on December 4, the “Education Directorate in the City of Free Hama” launched a call for help warning against the suspension of the educational process and the dropout of 13 thousand children from schools due to lack of funds for more than six months.

The call stressed the fact that the Directorate’s staff are all volunteers, which exhausted the establishment, for the employees are not getting any sort of salaries or compensations. In addition to this, there are not operational costs, which paralyzed the Directorate’s circles and departments and hampered the process of schools’ follow up and supervision. It addressed the bodies concerned with child rights and education, as well as the parties who are interested in the future of Syria, as not to leave the Directorate alone in the face of difficulties.

The People Are Supporting the Organization

The Director of Education, Ahmad Fares, explained that Hama’s schools are spread over four geographical areas which are “the besieged eastern, western, northern and southern parts,” in addition to the camps’ schools. In an interview with Enab Baladi, he said that school’s conditions are dramatic, as they have not received any logistic support, including stationery, books or heating devices. He stressed that these schools have never been funded, with the exception of four schools that have been sponsored by “Majd AlSham” and 16 schools by the “Justice and Development Foundation,” which stopped on the grounds that the transfer of funds has stopped.

The Director of the Education Office in the Free Hama Governorate Council, Samer al-Satouf, confirmed that the number of the volunteer schools affiliated to the Education Directorate in the City of Free Hama has reached 140 schools with  1300 teachers and administrative figures, who have been working as volunteers since the beginning of this school year, and about 36 thousand students, more than 80% of whom do not have books for their parents do not have the needed money to get stationery or books.

To continue the educational process, the Directorate has provided financial support with the help of families, according to al-Satouf, who confirmed to Enab Baladi that the Directorate is currently trying to provide less than 50% of the needed support for each school by collecting donations from civilians, especially the students’ parents, to secure the heating oil, cover the windows, and buy simple stationery to run the school.

Al-Faris pointed out that the Directorate asked schools’ principals to collect a one-time fee of one thousand Syrian pounds from each student as an emergency solution for running the school affairs. He said that the attained money would run the school for two months only or less hoping that the concerned organizations would find a solution in time.

Al-Faris said that the Directorate declared bankruptcy because of the absence of support for more than six months. The teachers work voluntarily without pay, which makes them suffer a fragmentation between the need to support their families and to help their students.

The absence of funding coincided with the onset of the winter, especially as most schools are partially or totally destroyed by the shelling and unsuitable for the educational process. The Director of the Western Academy in the Education Directorate of Free Hama, Khalid Al-Faris, confirmed this saying that the conditions of 15 schools spread from Zayzun village in the north to Midan Ghazal in Shashabo Mountain in the south are tragic since most of them do not have windows or doors.

In the shadow of the volunteer educational system run and paid for by teachers, al-Faris pointed out that the schools of Al-Ghab Plain under the Directorate suffered shelling, including al-Ankawi, al-Zaqqum and al-Hamidiyah schools, while the percentage of destruction in the rest of the schools is less. He also said that all the schools have to be restored amidst the absence of fuel needed to protect the students and their teachers from the winter’s cold.