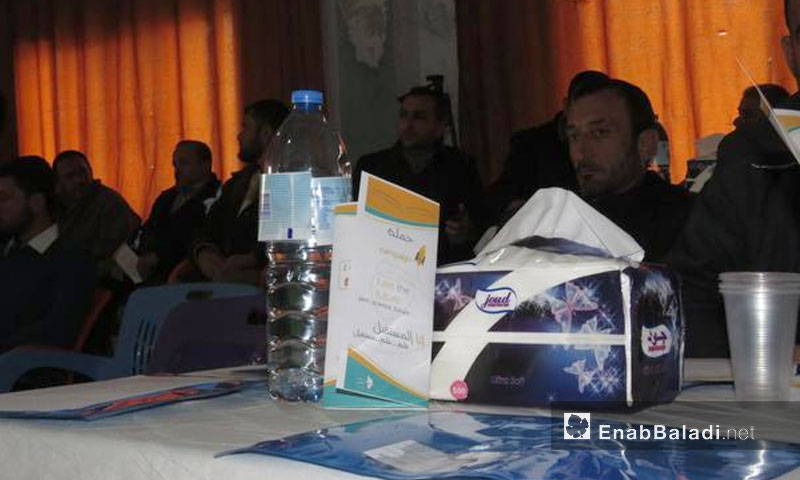 Mohammad Khaled’s daughter, from Idlib’s southern countryside, abandoned high school in the final year, two years from now. However, her father is keen to convince her to go back to school and complete her education.

Mohammad attended a session that discussed the educational situation in Kafrsajna, with the “I Am the Future” campaign, which “Youth for Changing” organization has organized targeting high and preparatory schools in five regions of northern Syria. He told Enab Baldi that he is “optimistic” about the campaign.

The campaign which started at the end of November, will last for two consecutive months. It will end on the 23 of January targeting 400 young people. It includes networking workshops with the involved and concerned bodies in the region, workshops with parents and distributing awareness brochures.

Among many other cases, Qasem Dukhan, a father of a student who dropped out from preparatory school, said that he was invited to attend workshops within the campaign. Through these workshops, he learned about things that were absent to him. In an interview with Enab Baladi, he said that his son has dropped out “but [he] will try to get him back to school.”

Attempts to Overcome the Problem

The campaign’s staff is trying to find solutions for the student’s tendency to drop out of school in the two stages, according to Ali Hallak, a coordinator in “I Am the Future.” He pointed out that the first activity within the campaign’s context invited those who are concerned with the educational process; representatives of Directorate of Education, Local Councils, parents and schools’ principals, attended the event.

Ali explains the mechanism according to which the campaign works. He says that it studies the problems in the educational process and explores the reasons which hindered the students and prevented them from applying for the certificates. After that, it attempts to come up with solutions and suggestions to solve the problems “to participate in supporting adolescents who are the most affected.”

The campaign’s coordinator believes that “most of the organizations and the parties involved in the educational process have not targeted this segment for they focused on little children.”

The “Free” Police also participated in supporting the campaign, according to Adjutant Ismael Shahoud, the Head of the Outpost in the town of Maar Tahroma. He told Enab Baladi that the police’s main role is facilitating the communication between educational staffs and the parents of the dropouts, and encouraging the students to get back to school.

Wael Mawas, a member of “Youth for Changing” organization and a community activator in Kafrsajna region, managed to sense the response of the concerned bodies and the decision makers. In his interview with Enab Baladi, he pointed out that the administrations of the schools “welcomed the idea that has been proposed for the first time in the targeted geographical area.”

“I Am the Future” staff is collecting statistics about the students of the two targeted educational stages.

He points out that “the parents got interested after we managed to touch their concerns,” and assures that “we are still in the first step of the track that we are following to achieve our goal, which is getting as many students as possible to their natural place at this age. “