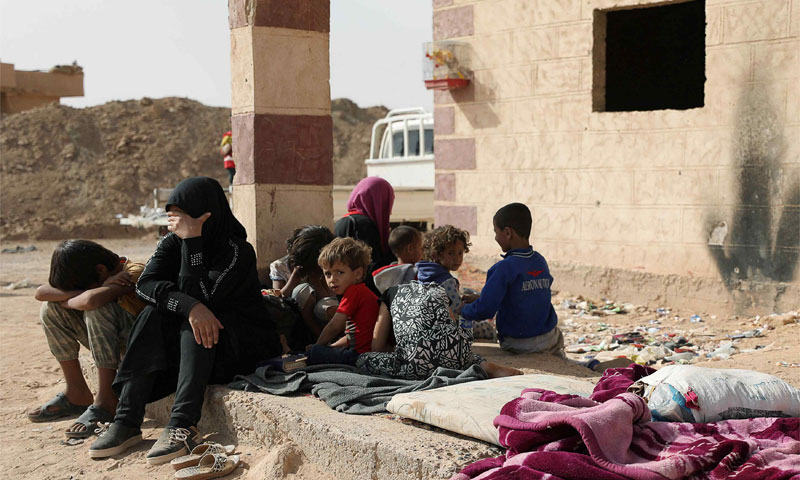 “As if the place has witnessed an apocalypse,” it is the expression which Abu Ali, 48 years old man and one of Deir ez-Zor’s residents, used to describe his destroyed city, which he returned to six years after leaving to Damascus after obtaining a special permission from the Syrian regime to enter the Jubaila neighborhood.

Abu Ali wanders in his neighborhood and remembers the moment he left it, in September 2012, when Assad’s forces raided the city’s neighborhoods and clashed with the “Free Army” factions.

The fighting displaced thousands of people and only 70 thousand people stayed, all of whom wished to leave their city which has been turned into rubbles.

Layers of cement and rubbish occupied the place where “Abu Ali’s” house used to be. Though he was prevented from taking pictures of the city, he managed to estimate that at least 50% of it was destroyed. Estimates which other citizens confirmed after they were allowed to enter the neighborhoods which the “Islamic State” used to control.

Abu Ali wandered in the streets of Sheikh Yassin, al-Hamidiyah, al-Haweeqah, al-Aradi, Kinamat, and Jubaila. He went back four decades in time and settled down in the warmth of childhood. In these, in the city’s neighborhoods, he searched for traces of people and places but none existed. “I did not find anything there. Everything is changed and will not return to the way it was. Even the tombs of my parents and relatives were missing,” he said.

Five years ago, Um Mohammad, 28 years old, was displaced from al-Aradi neighborhood to al-al-Qusoor. She told Enab Baladi that her house was totally destroyed and pointed out that Assad’s forces and ally militias “are exploiting the situation to plunder the city’s remains, and no one is doing anything about this.”

She said that “even the telephone cables were not spared, and the latest robberies targeted electricity cables and the cellphones network.”

Many people are nostalgic for the city. However, they doubt the possibility of going back there, including Masoud al-Khalaf, a 28 years old activist, based in the Turkish city of Urfa.

“There is no way to go back. The path is distant and the barriers are increasing,” Masoud tells Enab Baladi. He points out that the displaced people follow the city’s news and its photos on social media and television channels.

Activist Sayed al-Sayyed, who lives in the city of al-Hasaka, criticizes the images from his city considering that “the selfies which are taken by the militia’s members involved in controlling the city, express brutality and how destruction is exploited in favor of the regime, although it was the party who caused the largest part of it.”

However, Nayel al-Mahmoud, the supervisor of “Twasol Dery” Facebook page, which is one of the most prominent media platforms involved in presenting news about Deir ez-Zor, comments on the activist’s point of view saying that publishing these photos “is an attempt to show that it is wrong to abuse the State’s establishments and offices and to shed the light on the damage which befell the city.”

Nayel told Enab Baladi that he belongs to the people of Deir ez-Zor and not to any of the conflicting parties. He also pointed out that “most of the people who criticize [the photos] live outside the city, away from the people’s concerns.”

Those who wander in the city of Deir ez-Zor are for sure aware that the city lacks facilities and services. It will take many years of reconstruction to give the city its life back.

Most of the city’s people, living in different places and having different affiliations, agree to a single fact that the city is changed and it will never be the same.