Displacement to Idlib Contributed in the Reconstruction of the City 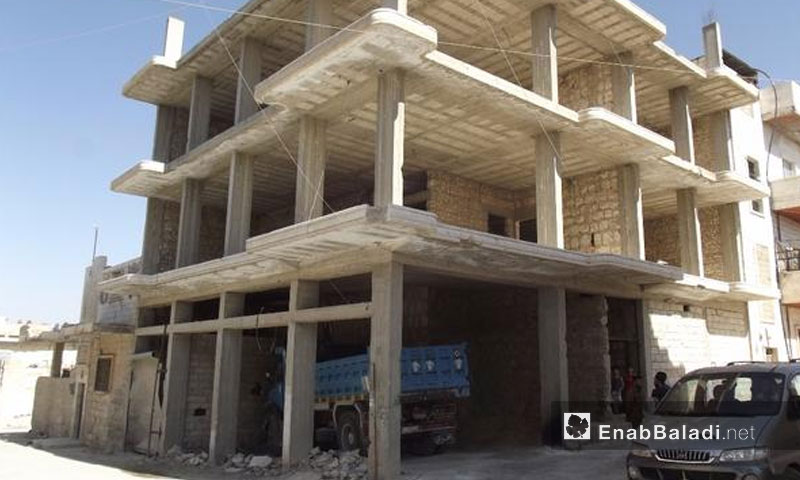 Overpopulation contributed to the reconstruction of the city, especially when the enforced displacement reached its peak in the different Syrian governorates, sending thousands of people to Idlib, which has 600 thousand inhabitants today, according to the city’s local council.

According to the city’s residents, the increase in the numbers of people has its own specific advantages and disadvantages. They mentioned the gradual restoration of the buildings destroyed in the former shelling or battles, the qualification of buildings which have been under construction prior to the revolution, in addition to the infrastructure which accommodated massive numbers of people.

Enab Baladi interviewed Ismail Anadani, the Director of Idlib’s Local Council, who stopped working after the formation of the “Syrian Salvation Government” in November. The director have already counted the city’s population.

Anadani estimated that the current numbers are four times double the ones which existed prior to the revolution, for “Wikipedia” shows that, in 2011, the number of the people was 165 thousands. He pointed out to the lack of accurate statistics indicating that more than three-quarters of the city’s population is displaced people (guests).

Those guests started private jobs and independent economic projects; their interaction with the city’s people is a positive source of innovation through knowledge and expertise exchanges, as well as cultural and traditional integration, according to the Local Council’s Director.

Anadani did not deny that, in the beginning, the massive numerical  pressure which reached Idlib “was a burden on the ruined water, electricity and sewage systems that were not prepared to accommodate such numbers,” in addition to the urgent need for more residential buildings, which required the restoration of the partially destroyed ones and coating the buildings that were not ready yet.

Ausama Khaled, a displaced man from the city of Homs, sells salep on the streets of Idlib city. He said that he lives in the “Youth Housing” neighborhood, which turned into a neighborhood for the displaced people of Homs, according to Idlib’s people.

Some of the organizations in the Youth Housing neighborhood, which is relatively at the outskirts of Idlib city, adopted the place which was under construction and did not contain a single habitable house, according to Ausama, who pointed out that “the neighborhood is full of life, despite the fact that the preparations were simple in the beginning and within the bottom limits.”

Lacking hope in going back to Homs triggered Ausama and other displaced people to think seriously about settling down. Accordingly, they started to better the coatings of the buildings they inhabited. “Many people prepared their apartments in a complete manner, starting with the flooring, the kitchen and all the needed supplies,” he said.

The Restoration of the Destroyed Houses

The absence of empty houses in the shadow of the increasing numbers urged some of Idlib’s people to restore the destroyed ones; they did not limit their activities to the houses which were under construction.

Ghaleb was convinced by what the real estate offices’ owners were telling him, which proposed that he restores a partially destroyed house and, in return, he could live there for a period of time. “The idea was totally out of consideration for me. However, after my failing attempts to find a house, it seemed logical. Therefore, I chose a house to restore and inhabit for eight months without paying a rent,” he said.

According to Chaleb, most of the partially destroyed houses in Idlib were restored and are inhabited today. He explained that “restoration processes covered most of the houses, either through concerned humanitarian organizations or through the people renting them.”

The construction processes, which the city of Idlib is witnessing, are not limited to buildings only. However, the restoration and rehabilitation operations reached the city’s infrastructure, especially that many of the city’s people, which is included in the “de-escalation agreement,” wish that stability in Idlib would go on so it would attain a sufficient degree of its former shape.