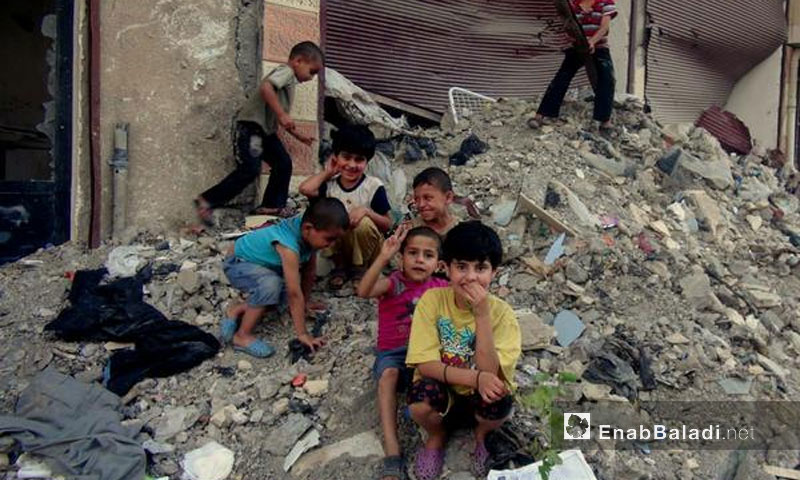 The media affiliated to the Syrian regime has been spreading news about “life going back to normal in Deir ez-Zor,” but reality has another saying to the issue according to what the city’s displaced people and the few, who are still living there, have said.

Those who have been interviewed by Enab Baladi, say that “the city’s reality is still mixed with pain and darkness.” Abu Mohammad, 45, who is an employee in one of the regime’s government establishments, says that “the executive bodies are preoccupied with dividing the money among themselves and stealing the city’s remnants.”

On Saturday, the 16th of December, the Syrian official television announced that landlines and cell phone networks are back into service in the different regions which have been controlled by Assad’s forces in Deir ez-Zor.

Abu Mohammad points out that the Assad’s forces and militias “have stolen even the cables of the landlines, which are buried within the ground,” he wonders, “How can these people rebuild the city?” the thing which the city’s people consider as their legitimate right.

Since the regime took control of the whole city, the last of which was al-Hamidiya neighborhood, in early November, a segment of the people in Deir ez-Zor have been complaining about thefts and the lack of security.

However, the regime has announced the arrival of the first amount of money allocated for the city’s reconstruction, which is assigned for clearing of the rubble, a process to be implemented in stages over four years, according to the regime’s sources, which estimated that the first payment is about two billion Syrian pounds.

Different local sources confirmed to Enab Baladi that “no reconstruction process has been implemented. The work which has been so far done by the municipality, in November, is limited to cleaning some of the streets in the neighborhoods of al – Qosoor and al-Joura.”

Displaced People Dreaming of Going Back

The people were shocked with what they have seen upon returning to the city, which enhanced their desire to stay away from Deir ez-Zor, according to Abu Ghanem, 72, who did not have the slightest idea about what he was going to see after his recent return with two of his siblings to the city.

“All that I thought of was my memories in the streets of this tortured city,” says the old man, whose nostalgia turned into resentment with the hard journey and the “abusive treatment” he received from the regime’s members spread throughout the roads and at the city’s gates.

The old man describes his feelings after the soldiers have refused his petitions to allow him to visit the graves of his parents and siblings. He was “let down.” All he wanted, after that incident, was to abandon the city which no more resembled his memories of it, “this city can never be Deir ez-Zor.”

His sister, Um Said, 70, speaks of a market for second-hand furniture in al-Joura neighborhood, which has been taken by Assad’s forces from the neighborhoods that used to be out of the regime’s control.

Um Said tells Enab Baladi that she found some of her furniture exhibited in one of the market’s shops. “I asked the shop owner to understand what was going on; however, the soldiers threatened me,” she explained and found nothing to do but to cry.

According to the testimonies of some of the people who have been interviewed by Enab Baladi in al-Joura neighborhood, every day, the regime’s soldiers transport objects from the neighborhoods which they are controlling; “some of the objects are taken to the governorates of al-Hasakah and Damascus.”

The city’s people confirm that they are still banned from entering the neighborhoods which were out of the regime’s control unless they get a security license which allows them to pass through the checkpoints distributed throughout the city, amidst a total absence of basic services, especially water and electricity.