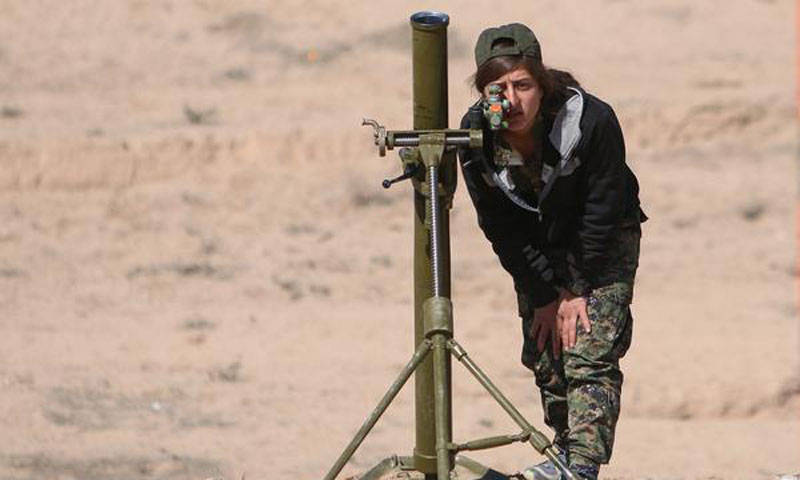 Syrian Democratic Forces’ (SDF), a Kurd-led coalition, military campaign draws an economic map in the surrounding of Deir Ezzor with borders that include the rest of the Syrian Al-Jazira Province. The campaign stresses the accelerating steps taken by SDF to secure wealth and energy sources, which ensure the sustainability of the Kurdish Self-management Forces in Syria’s northeastern part.

Koniko Gas Plant and Al-Jafra Oil Field are among the sources that have been seized from the Islamic State (ISIS) and the Syrian Regime for SDF managed to control them backed by the US-led coalition last week.

Currently, SDF is trying to control the remaining wells and oil fields surrounding them in the eastern bank of the Euphrates, which contains 90% of Deir Ezzor’s oil production.

But, why do these fields matter, and what are the potential selling channels for the oil produced in more than four fields in al-Hasakah and Deir Ezzor.

Only a few hours after it seized Koniko Plant, SDF started to display its production capacity focusing on the Plant’s economic importance in Syria and the modern design of its machines and production lines considering this step as an achievement for its military campaign on an economic level.

The Koniko Plant is located 20 kilometers northeast of Deir Ezzor, in Tabia Town. Established in 2001 as a joint project between SPC and the American ConocoPhillips, the Plant is considered as one of the most advanced oil facilities in Syria.

Enab Baladi communicated with Hisham Al Saleh, the Former Director of Ibla Gas Plant, who spoke of Koniko’s production capacity before 2011. Koniko produces both associated and free gas, with a production of 150 million cubic feet of clean gas, a 1000 tons of domestic gas and 30.000  barrels of gas condensate.

Al Saleh made it clear that the Plant is one of the most important gas producing plants in Syria depending mainly on two sources of energy, the gas produced by oil stations in the fields of the Euphrates and Deir Ezzor Petroleum Company (DEZPC) and the gas produced in the Tabia field.

According to Al Saleh, most of the battles and the military operations, Deir Ezzor is witnessing, are conducted in areas referred to as the west of the river and the east of the river (the Euphrates); he pointed  to the fact that the Euphrates’ eastern bank includes 90% of Deir Ezzor’s oil fields, which are run by ‘Al Furat’ and ‘Deir Ezzor’ petroleum  companies.

According to “The Oil Weapon in Syria,” a report issued by the Syrian Network for Human Rights in 2014, Deir Ezzor Governorate includes some of the largest oil and gas fields in Syria; the most important of these are al-Omar oil field northeast of Mayadin City, al-Tanak field in al-Shu’ytat area in the governorate’s eastern countryside, al-Ward field near al-Duvair village in the eastern countryside, al-Taym field near the city of Mohasan and south to Deir Ezzor and al-Jafra 20 kilometers away from the eastern part of Deir Ezzor.

According to Al Saleh, Koniko Plant used to recycle gas to produce light oil, known as condensate, the price of which exceeds that of Print, the world’s most expensive type of oil; he mentioned that the people of  Deir Ezzor used the light oil for cars directly in the previous years.

It is important to mention that al-Rumailan oil field includes 1322 oil wells, in addition to 25 liquefied oil wells in al-souedieh.

This state of expanding control led to a number of questions concerning the outlet through which SDF and the Kurdish Self-management Forces are utilizing to sell the oil production.

Al-Saleh explained that the Syrian Regime, amid the ambiguity of their current agreement, granted the Kurdish units in the beginning of their control over the oil fields certain operating advantages in return for a financial revenue and a portion of oil.

In addition to dealing with the Syrian Regime, a portion of the Syrian oil and gas is merchandised in northern Iraq via smuggling routes, mixed with Erbil oil, without any sort of accountability.

Al-Saleh pointed out that the oil is transferred to Iraq through the temporary oil pipelines established during the Iraq War.  Later, it was confirmed that the large companies, which have been running the process are the companies of Erbil.

Enab Baladi’s informed sources confirmed what  Al-Saleh has said and pointed out that the oil has been smuggled through an old pipeline which connects Ayn Zalah refinery in Iraq with al-souedieh station, in addition to newly constructed pipelines.

A source in the Syrian Interim Government’s Ministry of Energy confirmed to Enab Baladi that   Self-management Forces have started to export oil after controlling the region; the oil is transferred  to Iraqi Kurdistan, then to international markets from al-Rumailan, with a production capacity of 60 to 70 thousand barrels a day.

Abdul Qadir al-Alaf, an expert in the field of oil and mineral wealth, said that “SDF cannot capitalize on oil unless it cooperates with the Syrian Regime for they have joint agreements concerning transferring oil to power stations and the exchange of interest”.

He added, to Enab Baladi, “relating to oil, the matter is different; there is a margin where oil is sold to Syrian local markets, the freed regions, the ones under the Syrian Regime, and where primitive refineries are”.

He considered that “though it did not disturb its relations with the Syrian Regime, SDF will make additional agreements that allows it to sell oil and gas products it controls, especially after the expected siege on the Iraqi Kurdistan”.

Al-Saleh explained that Koniko’s lines are all linked with the Syrian Regime and the stations under its control. If the Plant is operated, he considers that its products will go to the Regime.

He pointed out that the Syrian Regime is currently depending on the north plant which the Islamic State (ISIS) operates under a Russian supervision, as well as the Furqlus Gas plant, in addition to al-Shaer gas field, it controlled in the beginning of this year in Homs’ eastern countryside, and al-Jabseh under SDF’s control.

According to a map of the Syrian gas pipelines, which Enab Baladi managed to get, the first pipeline starts from al-Jabseh field, passing through a station in the middle of Deir Ezzor and Hayyan gas plant reaching Qatina station west of Homs.

The second pipeline begins from Deir Ezzor gas plant east of the city to Hayyan plant, then to Alnasrya and Tishreen power stations.

The third pipeline begins from al-Omar gas plant passing through al-Rayyan, to be divided into two lines; the first goes to Mhardeh and the second to Alnasrya and Tishreen power stations.

There are other pipelines including Arak-Zizun reaching the city of Aleppo and Baniyas pipeline.

What about the Foreign Partnerships?

Dozens of foreign companies have invested in the Syrian oil fields, especially in the eastern areas of Deir Ezzor and al-Hasakah.

But these companies stopped after 2011 as a result for the international sanctions imposed on the Syrian Regime, and the battles that allowed the Islamic State (ISIS) to have control over all the fields at the time. The companies did not comment on the future of their investments in Syria.

Hisham Al Saleh, the Former Director of Ibla Gas Plant, explained that major companies around the world run the oil fields controlled by SDF, and that they will never relinquish them to other companies or parties.

He also said that al-Tabia field which Koniko Plant depends on relates to al-Jafrah oil field run by Total, a French company.  In 2008, the company signed a contract to expand and reinvest in the field, pointing out that the fields run by the company can be reached unlike the fields controlled by the currently dominating party.

Total is one of the most important French companies operating in the oil sector. In 2011, the company announced that it would suspend its activities in Syria as a result for the sanctions imposed by the European Union.

Total operates a joint project, owning half of it, with The Syrian Petroleum Company, owned by the Syrian Regime, which was not included on the list of the Syrian companies under the European Union’s sanctions.