A child getting some rest while returning to Syria from Jordan with his family - August 29, 2017 (AFP) 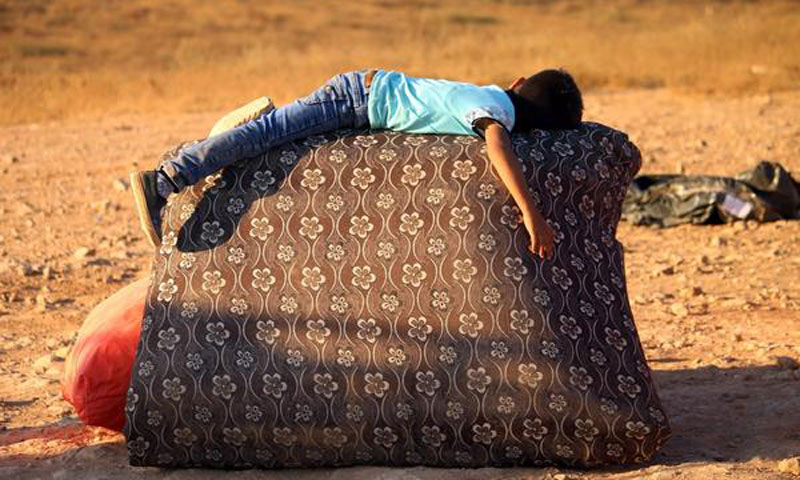 Daraa, a governorate in southwestern Syria, is approaching the third month of the de-escalation agreement signed, last July, by the Syrian opposition and the Russian side stopping all military operations between them.

While the agreement gave the factions of opposition the chance to breathe and provided relief associations and the civil community with an opportunity to move the wheel of developmental projects, it triggered the regime to reactivate the reconciliation issue, the one it failed to activate for months.

The displaced cities and towns’ issue was the first to activate because the absence of battles and the opposition’s lack of any power cards, that can be imposed on the regime, led these regions’ people to have a certain conclusion, which implies that “the return to our homes, from where we have been displaced, will only happen through negotiations with the regime,” according to a source from Al-Shaykh Maskin’s negotiation delegation.

The source, wants to stay anonymous, made it clear to Enab Baladi that  “the delegation has been formed out of a number of personalities known by all the town’s people in an attempt to take them back home after the opposition factions slackened to do so”.

The source also said  that “since al Assad forces took control of the city of Daraa, the factions refused to conduct any military operations to set it free despite the availability of all the needed means, thus, forcing the people to reach an absolute conviction that they were victims of agreements seeking to surrender the city to al Assad forces,” adding that “in all the currently displaced cities, the factions have been prevented from undertaking any military action to release the city”.

The city of Al-Shaykh Maskin and the towns of Khirbet Gazal, Attman, Namer, and Deir Al-Adass are among the most prominent regions which the regime has controlled in Daraa Governorate after displacing all its residents, and which the battles, from the side of the opposition factions, have stopped seeking to control.

Facing these outputs, the delegation negotiating on the behalf of Al-Shaykh Maskin’s people managed to hold a meeting with the regime’s representatives in the city of Izra. The regime’s demands during the meeting did not exceed the delegation’s expectations according to the source which pointed to the idea that the delegation’s members knew that the regime was in “a position of strength” and that its conditions for the reconciliation were expected.

The regime’s conditions focused on surrendering amounts of weapons and enlisting a number of the town’s people in the National Defence Militia, in addition to the return of the dissidents to service under al Assad forces. In return, the regime offered deferred promises only.

The delegation’s source said that “the regime promised a gradual return of the people after the reconciliation and a disclosure of the fate of the dittanies but stipulated that the implementation should be postponed until the reconciliation is fully completed’’.

The Negotiation Delegation lost between the Regime and Dar Al-Adl

The delegation’s disappointment did not stop at this point because Dar Al-Adl Court of Horan has arrested its members for seeking a reconciliation with al Assad Regime to release them a few days later after paying pails.

The source considered that “before arresting us while we are seeking to take people back to their homes, the court should arrest those who are stacking up and selling weapons and ammunition and executing external orders asking them to prevent battles against al Assad forces, those who are merchandising with al Assad’s checkpoints in secret. Above all, the court should arrest those who are surrendering weapons to al Assad forces for personal ends”.

The source warned against the anger of the people of the displaced cities and towns which erupts from their current situation considering that the message which Dar Al-Adal Court and the factions have been trying to send is that “we will not allow you to negotiate with the regime for a return”.

The opposition factions operating in the town of Kafr Shams issued a unified statement threatening to “strike, with an iron fist, all those who wish to make a trade at the expense of our martyrs’ blood,” in a hint to those who are promoting the reconciliation.

On its turn, the military council in the city of Da’el has issued a statement negating all the talks about a reconciliation in the city considering that tackling this issue is “a cowardly action triggered by the regime’s intelligence to create a glamour within the city and on the level of the cities that have been freed”.

In addition to what is  mentioned above, the military and civil factions operating in the city of Inkhil have issued a unified statement directed to those promoting  the reconciliation threatening them to “strike with an iron fist and that they will be exposing themselves to raiding, arrestment and being held accountable,” relying, in their statement, on the generalizations issued by Al-Adl Court of Horan.

The pausing battles along the southern front during the past months of the de-escalation have prompted people to think more about what the future holds for the southern region. Most of the cities and towns of the governorates controlled by the opposition factions continue to suffer from poor living conditions, despite the provisions of fuel and building materials provided by the regime, in addition to what Jordan guarantees to provide in the form of food aid and various equipment.  The regime managed to exploit this situation successfully sending a number of intermediaries, who started steering delegations in more than one town, thus, reactivating the issue of reconciling once again.

Even if these conditions do not constitute a sufficient justification for the opposition factions to respond to the regime’s pursuits, the people still have the right to question the  utility of the de-escalation agreement and the cessation of the battles since these agreements fail to give them any hope in a future that does not include a reconciliation with the regime.