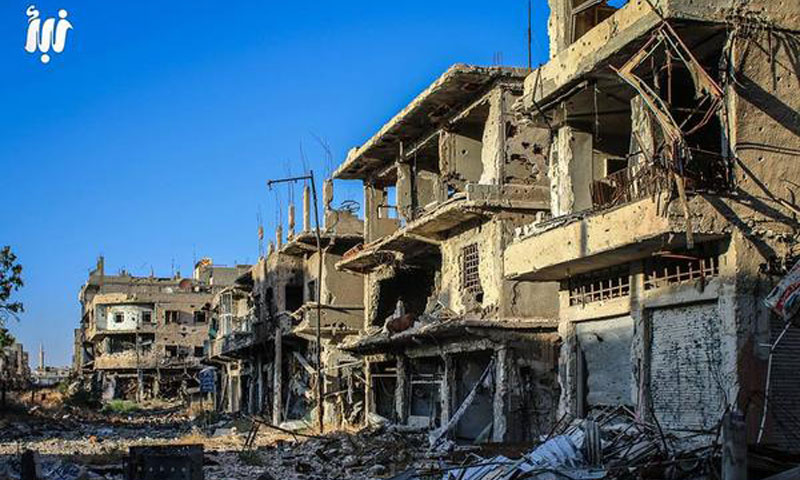 In the past a few weeks, Daraa al-Mahatta market witnessed a remarkable vividness on paper, the biggest trade cycle in Years.  Sales and purchases increased in the offices of the Real Estate Registration Department by people who suddenly appeared in the field of purchase without any former presence.

The main market in Daraa al-Mahatta, which is the commercial part of the city, separates between al-Sahari and the north line under Assad’s forces control and Tariq al-Sad and Daraa camp held by the opposition’s factions.

In 2013, the factions managed to take control of large parts of the market, before the Assad’s forces recovered most of it. Accordingly, the market turned into a battlefield and a space for destruction and armed conflict, in which extensive robberies, conducted by the two sides, have been documented. These thefts made life impossible there, especially that the Assad’s forces have prevented civilians from entering the market for four years.

What do the Purchases Hide?

“At first, I thought of the speculations about selling my shop in terms of a joke, says Abu Abdul Rahman, the owner of one of the Daraa market’s shops, while telling how he sold his shop. “A friend of mine called me saying that there is someone who would like to buy my shop. I was shocked for a moment, who would buy a shop that might be destroyed and impossible to reach.”

To Enab Baladi, he said that “When I started investigating the story, I was surprised that many people have really sold their shops or intend to,” adding that “all the circumstances encourage selling the shop for it represents a successful bargain and an opportunity to make use of.”

“I haven’t known anything about my shop for years, the market is completely destroyed and there is not a single hope for the fighting to end or life going to normal. Even if we returned, we might need a large amount of [money] to restore [the shop] and start working again,” he said.

Abu Abdul Rahman said that he had certain doubts about the real reasons behind the buyers and the big number of shops they intend to buy in the region.

The merchant believes that the buying process has nothing to do with the demographic change especially that the buyers themselves are from Daraa. “[The buying process] is closer to their desire to benefit from the current truce and to buy property for cheap prices to sell them later for higher ones.”

“The circumstances are all weird […] I am selling a shop that might be in a good condition or destroyed, moreover, the shop and the entire building may have been turned into rubble,” the merchant says.

The value of the contract between the two side, the seller and the buyer, did not exceed the seven million Syrian pounds (equivalent to 14 thousand US dollars).  Prior to the Syrian revolution in 2011, the contract’s value would not have got the buyer a shop in the same region, according to Abu Abdel Rahman.

From the Perspective of the Law

To understand the legal situation of the selling and purchasing process, Enab Baladi Made an interview with Mr. Faisal Al-Mahameed, a lawyer, who explained that “The process from the point of view of the law is completely sound.” There are no laws which prohibit buying and selling the shops, both in the regions under the Syrian regime or the opposition, especially with the consent of the two sides.

About both the buyer and the seller’s ignorance of the shop’s condition, al-Mahameed explains that “The description in the land Registry is [considered as] the last description of the shop, the selling process is conducted accordingly.”

“The abolition of such a process in the future is very difficult without real reasons. If the opposition controls the region and proves that the new owner is accused of war crimes or corruption for the benefit of the Syrian regime, and if laws, which allow for the confiscation of the property of the perpetrators of these crimes, are legalized, only then these real estates can be confiscated, and they do not return to their former owners at all,” he said.

Under the current developments of the Syrian revolution, whether at the military or the political level, “This does not seem to be an option in the near future,” according to al-Mahameed.

Over the past years, the opposition has made huge media efforts to warn against the regime’s “demographic change” policy in more than one city, especially near the capital. The fires which suddenly erupted around the Old City of Damascus have raised the activists’ suspicions, who warned against the pressure imposed on the people there to force them to sell their homes and shops.

The situation in Daraa is even hazier. The question remains how such a vital region, the market, has turned into a battlefield and a space for destruction, enduring armed conflicts and mutual shelling for years, to finally become a market proposed for selling and buying.