“Rear Lines” War in Daraa did not stop 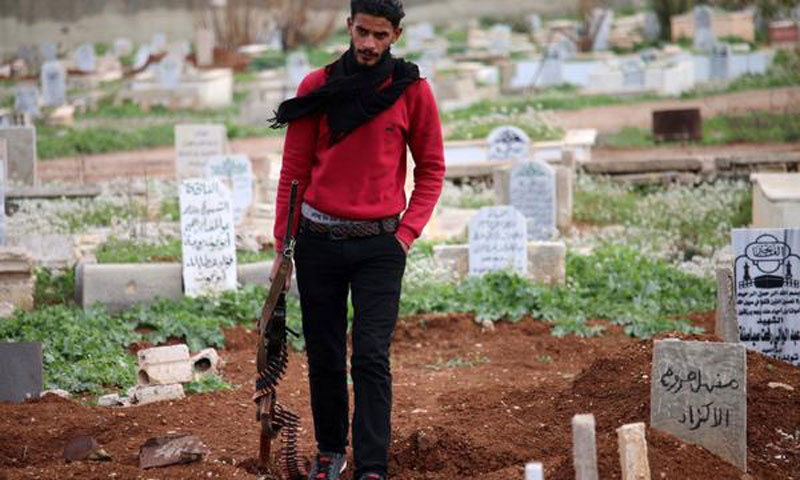 The declaration of “de-escalation” zones in southern Syria did not change the pace of road targeting with explosive devices in opposition factions-held areas in Daraa. During these recent months Daraa has become a scene of blast and daily assassinations amid military factions’ inability to confront this “raging war” inside its rear lines.

As assassination rates increased, questions were raised about the reasons behind the failure of the factions to curb these incidents, both in terms of security and military, and the reasons for al-Assad and ISIS cells’ infiltrations into their formations.

No Coordination or Operations Room

The leader of Suyuf al-Islam Brigade operating in the village of Daraa, Abu Malik al-Nuaimi, attributed the deterioration of the security situation to several reasons, most notably “the absence of joint coordination between the factions and the absence of a single operations’ room that aims at protecting  roads and patrolling.” He explained that “each faction is operating in its own region and is being isolated from others.”

Factions operating in the region are mostly affiliated to the southern front of the “Free Army”, along with Islamic factions, most notably Ahrar al-Sham and Hay’at Tahrir al-Sham.

Despite repeated calls from civil actors to resolve this problem, they have not found any solution yet.

“If an incident occurs in one area, patrols and roadblocks will be intensified for few days, and then the situation returns to the way it was,” said al-Nuaimi to Enab Baladi. The members of the factions’ are not fully aware that the barriers are meant to maintain road safety and are as important as the front lines.”

Al-Nuaimi explained the methods used by al-Assad forces in their war on the roads, through the use of new types of IEDs, pointing out that “the bombs are made in the form of rocks and stones in different colors and sizes, placed on the side of the road, and connected to remote detonators,” which made the task of their discovery by the opposition factions difficult.

In al-Nuaimi’s opinion, “the factions need to patrol round the clock on all roads, examine the sides of the road accurately, but this is not possible now due to long distances. The roads opposite the Assad forces controlled areas are longer than 200 kilometers from the far south in the city of Daraa, to the Triangle of Death area from the west, and the area of Lajat on the east.

Al-Nuaimi said that the solution to decrease these assassinations is to “establish a monitoring apparatus or a military faction not affiliated to any of the factions, which has one command and one coordination chamber, and whose mission is to protect and monitor the roads from the far north of the province to the extreme south.”

With regard to the reason behind the continuation of this type of attacks, despite the “tension-easing” agreement entry into force, the leader said that “the Assad forces do not mainly respect the agreement, and increased the pace of these operations to exhaust the opposition factions.”

The assassination of more than 100 people

Since the beginning of this year, the Daraa Martyrs Documentation Office has documented the death of more than 100 people, the majority of which are from the opposition faction’s fighters, as a result of roadside bomb attacks on the main roads.

“Most of the operations are intentional and not arbitrary, and military vehicles are targeted in particular. Previously, the regime has broadcasted videos of these operations, but the announcement of the tension-easing agreement forced the Assad forces to stop publishing these videos, as a commitment to stop military operations,” said Omar al-Hariri, a member of the office.

“The operations are very similar in terms of the location, the mechanism of implementation and the types of bombs to what was used before the implementation of the agreement, which confirms the involvement of the Assad forces,” he added to Enab Baladi.

During the period of the “easing of tension” announcement, 23 people were dead according to the documentation of the Office, including 19 fighters of the opposition factions.

Al-Hariri pointed out that “The Assad forces also targeted media activists, as was the case with the martyr Osama al-Zubi, who was killed with his brother and nephew by an improvised explosive device on the road between the towns of al-Karak al-Sharqi and Rakham .”

He pointed out that more than 17% of the victims have been documented since the beginning of the year 2017 in the province of Daraa who were killed as a result of the targeting of improvised explosive devices, while the percentage of victims of explosive barrels and air raids was approximately 20%, in the same period of time and figures confirm the impact of these attacks.

The Assad forces benefited from the situation of insecurity in the areas controlled by the opposition factions in igniting war of the rear lines, and the management and implementation of bombings and assassinations which targeted, mostly leaders and officers of military factions, and the “South Agreement” did not change its pace. These incidents raise the question about how long the areas controlled by the opposition factions will remain the stage of these operations.